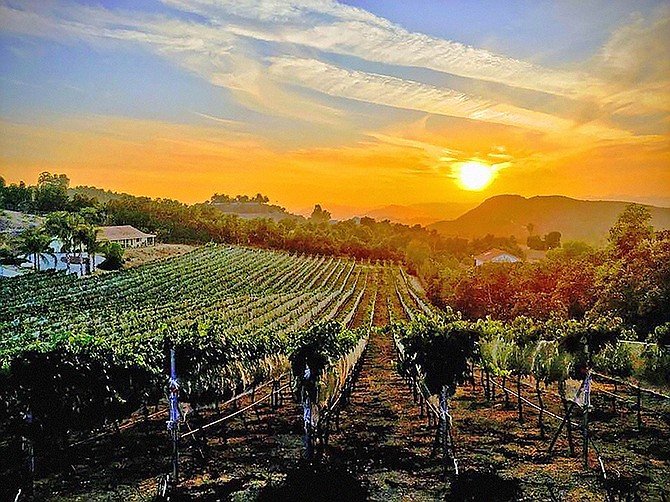 To visit Altipiano Vineyard and Winery, headquartered in Escondido, is to experience a piece of San Diego’s rich African American history.

Founded in 2008 and at 500-acres in size, Altipiano is the only Black female-owned winery in Southern California, as well as minority owned and veteran owned.

These aren’t recognitions that co-owner and wine maker Denise Clarke takes for granted.

“The thing is, I know what it means to be in the corporate world,” said Clarke, who will turn 65 years old next month. “I was in human resources and I saw it all. I know what it is like to be in a male dominant environment. I know what it feels like to have to be three times as good to get ahead. And I know what it feels like to get into a business that you aren’t trying to be in but then you have to make it work because failure is not an option. I know what those fears feel like, those challenges, the weight of it all. If you don’t have a good network of people that come from different disciplines that you can use as a soundboard and get that advice, then, it’s pretty tough. So, if I can share my story, especially with a person of color, and inspire them along their journey, then I’ve done my job.”

This is part of the reason Clarke, along with her husband and business partner Peter Clarke and her daughter, have kept Altipiano open as long as legally possible during COVID-19, she said: to offer an environment where patrons of all races can come and feel safe, relaxed and encouraged even if just for a few hours amid the pandemic.

With COVID the numerous state-mandated openings and closings since last March, it hasn’t been easy to continue to run the family business, said Clarke. Add to the crisis, political distress and race riots and last year was a tough year for everyone, she said.

Still, she is motivated when she hears people laugh while visiting Altipiano. That, she said, brings a sense of hope not just to her customers, but to Clarke and her family, who live on the winery, as well.

As a result, during lockdown, Clarke focused heavily on creating a safe environment for her and her guests to experience upon reopening.

“My daughter and my four grandchildren live here, too, and so it was always in my mind: how do we keep everyone safe?” she said, adding that the staff now wears gloves, disinfects seating stations between groups, switched to bottle service only instead of individual tastings, and gifts each visitor with an Altipiano stemless glass, courtesy of the winery, so to avoid reusing glassware between customers.

After a new wave of closing, Altipiano reopened again earlier this month. Its opening weekend was completely sold out, said Clarke, hosting over 100 guests. All of the tastings are outside, she said, adding that the winery has over 4,000 grapevines and grows a number of varietals, including petite Syrah and Cabernet Sauvignon. The winery also recently switched to 21 and over, said Clarke, as an added safety precaution.

Named after the Italian word meaning “plateau”, Altipiano was an avocado farm that perished in the Witch Creek Fire of 2007, said Clarke. In 2008, and inspired by a trip to Italy, it was reimagined as a vineyard and winery with Clarke as its master wine maker.

Since then, Clarke has inspired an entire generation of others.

Cassandra Schaeg said moved forward with the opening of her business, SIP Wine & Beer LLC, after learning of Clarke and her contributions to the beverage industry as an African American woman. Founded in 2015, SIP is the only wine bar in the city of Escondido today.

"Denise has been a mentor who gave me the courage to create space to pursue my passion," she said. "The wine space requires grit, tenacity and the ability to sideline naysayers. Denise cultivated a wine haven (in) Altipiano that shaped the San Diego wine culture and encourages women and people of color to engage and explore wine."