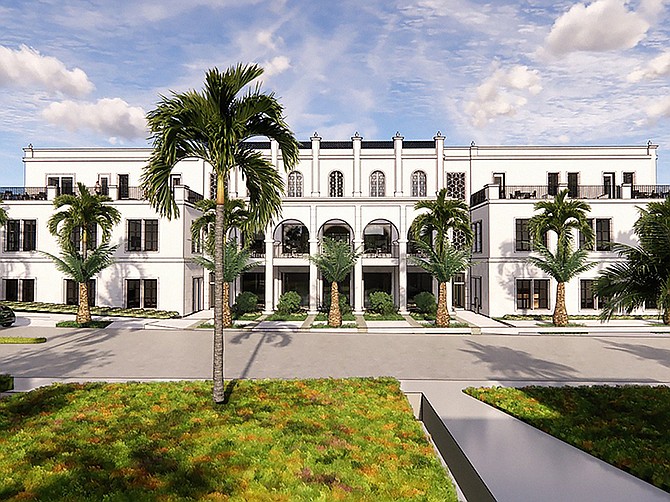 The University San Diego has started construction of a $67.5 million new business center that will include an 87,000 square-foot new building and renovation of the adjacent 48,000 square-foot Olin Hall.

Going up on a former parking lot near the West entrance of the university, the Knauss Center for Business Education in its design will embody what Business School Dean Tim Keane said was “the future of learning” with classrooms that are a far cry from the traditional university lecture halls, emphasizing open spaces and collaboration.

“We have the opportunity for interdisciplinary action to happen in multiple spaces,” Keane said. “It creates a more holistic understanding of the business world and other sectors of society.”

“It’s an ambitious combination of projects addressing the maintenance of what we call our legacy buildings. We improved some of the legacy buildings and at the same time, strategically built new buildings,” Borzage said.

That includes the ongoing renovation of Founders Hall and Camino Hall, both built in 1951, Borzage said.

“We’re excited with Knauss Center kind of topping off this entire push across campus to build up our classroom inventory and restore some of our legacy portfolio,” Borzage said.

The Knauss Center will showcase the university’s mission “to be a contemporary Catholic University,” she said.

“The whole building is like an open, active learning area that really embraces the current trends for education.”

Among other things, all the classrooms will have flat floors rather than the arena seating more common in colleges, so that the space is more flexible, said Jeff Ziebarth, principal of Perkins & Will architects, which partnered with Delawie Architects of San Diego’s Morena District in designing the business center.

“You could sort of reconfigure seating and everyone has sort of equal access to the space, there’s no hierarchy,” Ziebarth said.

Keane’s own office will be at the main entrance to the new building behind glass walls in a design meant to set the tone for the rest of the building.

Initially, Keane said the three-story building was designed with the dean’s office in a top-floor corner with views of Mission Bay.

Keane had it moved to the entrance with glass walls so people would know from the moment they entered the building that it was a very different place where openness is valued.

“We’re actually going to make sure everyone understands the way we’re doing business,” Keane said. “It represents the kind of culture we want to have – collaborative.”

The third-floor corner office that would have been his will be used by the business school advisory board.

The goal is to have the new business center open for classes in the fall of 2022.

The center is named for Don and Ellie Knauss, who in 2017 contributed $20 million toward its construction.

Knauss is chairman of the university board of trustees and the former CEO of The Clorox Corp.

The new building will be connected to the renovated Olin Hall by enclosed and open bridges and pathways. It also will have 1,200 square-foot patios on each end of the building on the third floor.

“What was challenging was we wanted to line the floors up with Olin Hall next door because they’re going to connect,” said Borzage, the project manager.

Business school programs are scattered across 10 buildings on the university’s 180-acre campus in Linda Vista, according to Keane.

They will be relocated to the Knauss Center.

“This is something that we’ve been trying to put together for a long time,” Keane said. “The School of Business has grown significantly over the last couple of decades. We’ve really added some great new programming.”

“We’re going to be one of the leading data analytics programs in the country,” Keane said.

The Student Success Center will include space for students to produce podcasts to promote their brand, Keane said.

To differentiate itself from other business schools, Keane said USD’s programs are being tailored around “this idea of stewardship” where students will graduate with a sense that “they are going to be accountable for the protection and care of society.”

“Everybody who comes out of our program has a clear understanding of their being accountable for improving life for everybody in society,” Keane said.

The new center is designed to teach and implement that philosophy.

“The traditional approach to business is very bottom-line oriented,” Keane said. “When people think of free enterprise, they think of trickle-down economics. This is more like bubble-up economics.”

Keane’s private sector experience includes 20 years in marketing at Anheuser-Busch where he founded a business analytics department. He left the company to launch a software venture that became a Microsoft Joint Development Partner and was later sold to a Canadian firm.

Keane’s idea was to create “a business education ecosystem,” said Ziebarth. “That became the driving force for the planning and design that would go forward supporting that.”

Working in partnership with the San Diego Regional Economic Development Corporation, the center will include technology that will allow live interactions between USD students and their counterparts across the globe, Keane said.

“When these startups go out into the market, they’re automatically global,” Keane said.

Typically, business schools have had “very traditional, lecture-based classrooms with solid doors on every office,” Keane said. “This is the exact opposite. By its very footprint it symbolizes this ecosystem of collaboration and innovation.”

Also included is a robotics café “to create a cashless store,” Keane said. “People can walk in, pick up what they need, they automatically get charged for it when they walk out the door.”

The new building also will have what Keane said will be three reflection rooms where students and faculty can “go back and meditate if they need to take some time to relax and unwind.”

The exterior of the new building that’s visible from the street will follow the distinctive look of the rest of the USD in its 16th Century Spanish Renaissance architecture.

A dramatic variation is the glass wall that overlooks the courtyard.

“There’s a little more freedom in the amount of glass we could use on the courtyard side,” Ziebarth said. “When you’re in the new building, you can look through floor to ceiling glass, through the courtyard to Olin Hall.”

Matching the other buildings will require “thousands of pieces of precast material,” said Mike Conroy, vice president of operations for Level 10 Construction, the general contractor.

“All the pieces around the windows, the parapets, the columns, there’s different bandings around the outside – they’ll all be made out of precast concrete material,” Conroy said. “The process entails creating shop drawings, then molds, then a series of samples to get them right before we start mass producing them.”

The three-story Olin Hall will undergo a transformation of its own, Ziebarth said.

“The entire Olin Hall, all the interior stuff is going to be removed and rebuilt,” Ziebarth said.

“The only thing that will remain before the rebuilding is the outside shell and the floors,” Ziebarth said.

The idea is “to marry the existing building with the new addition and create one holistic environment for the school of business, creating this ecosystem where each part supports the other,” Ziebarth said. “The goal was to blend the new and the old so that it looked like one complex. The existing Olin Hall will be closer in color and texture to the new part verses the other way around.”

The renovated Olin Hall will be centered around what Ziebarth called “departmental neighbors” that are open offices arranged around community space.

When finished, the project “is going to be one of the most forward-thinking business education centers in the world,” Ziebarth said.