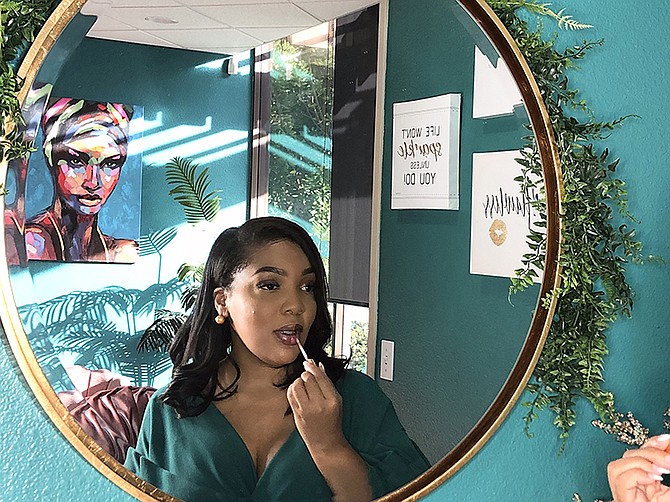 Photo Courtesy of Stephanie J. The Formula Skin Lab is San Diego's first full-service spa created to fill a void for men and women of color.

Stephanie J. opened her spa, The Formula Skin Lab in 2020. Then she closed shop again. Then she reopened it again, after hiring a contractor to build two decks in the backyard of her storefront so she could give facials and cosmetic services to her customers outdoors, as public health restrictions permitted.

“So we did that and the day that the project was completed — and quite a few thousands of dollars spent getting this stuff built — the governor announces that we could go back inside,” Stephanie J. said.

On Jan. 25, Gov. Gavin Newsom announced that he was ending California’s regional stay-at-home order which meant businesses such as restaurants and salons, which were previously restricted to outdoor operations only, could now operate indoors based on each region’s public health orders.

“And when I tell you that I just like went through it because I spent all of that money, and then now we can go back inside,” Stephanie J. said.

The Formula Skin Lab is San Diego’s first full-service spa created to fill a void for men and women of color, Stephanie J. said. It specializes in skin correction, such as acne and hyperpigmentation and also offers beauty services such as nails, makeup, and waxing.

Since Jan. 28, Stephanie J. said she has been busy coordinating client’s appointments and making sure everything works for indoor services.

Despite the rollercoaster of restrictions for local businesses like hers, during the pandemic, Stephanie J. has made the best of the stressful situation and found ways to deliver her services to customers in house and through online retail.

The Formula Skin Lab’s storefront, located on the border of Hillcrest and Banker’s Hill officially opened for business in July 2020 and has experienced the whiplash of multiple openings and closings due to the coronavirus pandemic.

Before she opened her full-service spa last year, Stephanie J. was working as a solo esthetician and she didn’t envision opening a spa when she enrolled at Bellus Academy to become an esthetician. Last year she was awarded the Best Esthetician in San Diego by Black SD Magazine and this is something that reminded her that she had something unique to offer the community.

“I think that I’ve known for a few years, but when it really solidified it was getting that award last year,” Stephanie J. said. “It was kind of like, okay, having the people vote, you know, really meant a lot and that’s when I was like okay we can really take this thing to a new level.”

When you walk through the doors of The Formula Skin Lab, you’re greeted with the sound of soul music, and the smell of incense. She shared that one of her clients told her it feels like she is at home, which is just what she was aiming for when designing the 6-room space.

The spa also includes a gentlemen’s room which is dedicated just for men visiting the spa. Stephanie J. said she knew this place would be hub in the community so she wanted to create a spa experience that was unlike anywhere else.

“A lot of times when our clients come to us, they don’t wear a lot of makeup or, you know, they’re still filtering their photos,” Stephanie J. said. “It almost seems like once we start making changes in their skin, when they walk through the door, we’ve seen tears, we’ve received hugs. It’s like there’s a new level of confidence in them. So for me, I feel like just knowing that I’m helping someone feel better about themselves and their overall like self-worth and self-value, it means a lot to me.”