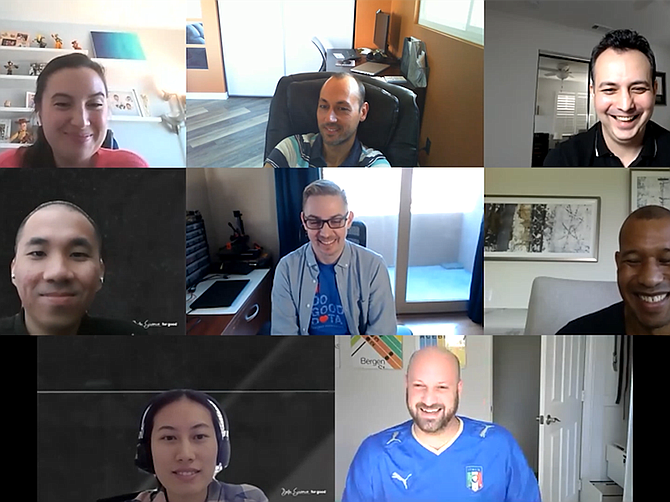 Claude Jones says there is more to diversity than just numbers and hiring demographics. But he is making use of data through his work with San Diego Tech Hub (SDTH) to create a cultural shift that will lead to a more inclusive tech community.

Jones founded San Diego Tech Hub in 2018 with a vision to make San Diego’s tech community a collaborative and diverse group of professionals that improve the city through acts of social good.

“What we’re trying to do is give back to others without expecting anything in return,” Jones said. “How do we leverage the community to help drive that instead of operating in silos?”

Jones is the senior director of Software Engineering at Walmart Labs in Carlsbad where he leads teams that improve the operational efficiency of software development and content delivery. The San Diego State University alum, explained that SDTH is a way for him to bring people together in his industry and discuss how to make it better for everyone.

As more companies lean into efforts to increase diversity and inclusion (D&I) in their respective industries, Jones said that it’s a change in mindset that won’t happen overnight. SDTH’s approach to catalyzing meaningful conversations about D&I is through sharing information.

One of the ways SDTH is making actionable efforts is through its “for good” initiative. In collaboration with the University of San Diego, Shiley-Marcos School of Engineering, SD Tech Hub launched its first “For Good” project in October called “Data Science For Good” — a free data science course taught virtually by industry experts.

Jones said USD approached SDTH to help provide opportunities to people who want to learn a new skill and give back to the community amid the pandemic.

The strategy is to “give prospective students the opportunity to experience what it’s like to be a data scientist, and break the stigma that it’s too hard to attain expertise.”

Jones said he is self-taught when it comes to data science, and he gained most of his knowledge by borrowing books from friends and at the local library during college.

The ultimate goal of the guided three-part virtual workshop is to build data science skills, advance careers and drive social change. The program uses publicly available datasets that highlight real issues, such as systematic racism and the national opioid crisis.

“The other part of that for good is that, you know, we want to focus on topics that are controversial in our society today, and allow people to be informed and come up to their own conclusions to help spark change,” Jones said.

For example, students looked at police stops by race in San Diego County and at the end of the course, “data analysis illuminated that black community accounted for 20% of police stops, but only 6% of population.” Jones said that by allowing people to analyze this information, it ultimately leads to a person analyzing their own choices and response to injustice.

“Now that people have that knowledge, you’re no longer ignorant and they either have to accept or deny facts at that point,” Jones explained. “So now the accountability has shifted. I don’t have to do anything, it’s on them now that they have to make the choice on what they’re going to do with the information of what’s going on. And when you get down to that level, you know, you have to do some soul searching — if you’re exposed to information, you have a choice to respond or not to respond.”

For companies focused on D&I, there is a similar shift in accountability, Jones said that must happen in hiring. Jones explained that when companies are hiring, there is a difference between the “right fit” and the “perfect fit.”

“You have to have companies that have a change in mindset, you know, and looking for this the right fit mentality,” Jones said.

When it comes to companies looking for the “right fit,” Jones said it is a matter of investing in an individual beyond their resume qualifications and in turn, building relationships that can lead to the next opportunity.

That’s where San Diego Tech Hub’s newest tool, The Hub, comes in. Jones said that The Hub, which launched in a beta version, is an online platform aimed at improving recruiting “fits” and offering a streamlined pipeline of diverse talent.

“When we think about companies, we can’t control who companies hire and what’s going on,” Jones said. “But what we can do is help educate companies about the type of talent that we have, why things are important, what’s going on, and there has to be a way of doing that — that’s what I can control.”