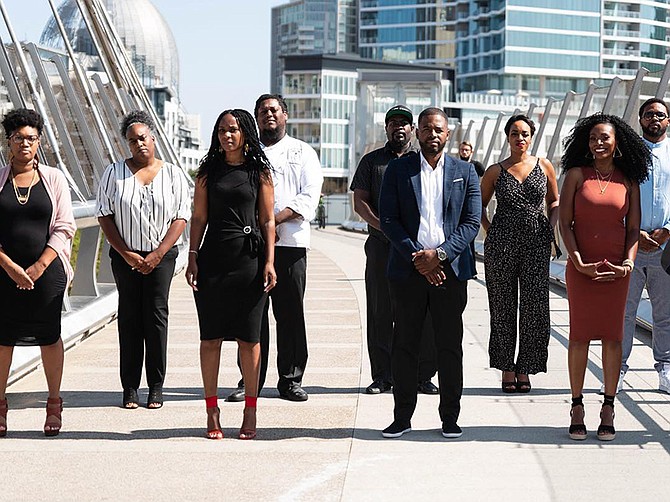 If you ask Founders Tinicia Smith and Sheri Jones, Black San Diego Empowering the Community, a local non-profit group, came to be out of pure necessity.

“Tinicia and I have been friends since the age of 11 when we used to run track,” said Jones, a native San Diegan and realtor. “She posted on Facebook one day looking for Black-owned businesses in San Diego and at the same time I was trying to grow my real estate business. I made a comment on the original post and then we met at her house. I threw an idea out there to create a networking event just for our community because every time I attended real estate events, I was the only person of color and it always made me feel some sort of way.”

Weeks later, Smith and Jones hosted their first event and over 100 people showed up, said Jones. Inspired by the turn out, what started as a one-off idea in 2016 has turned into a continuous effort that focuses on empowering and strengthening the local Black community.

Today, Black San Diego hosts at least four events a year, said Jones, through which the county’s Black residents can network with other entrepreneurs and learn about resources available to them, among other perks. It has a board made up of three prominent African American San Diegans, including San Diego State University Hall of Famer Gregory Tolver, owner of J.R. Tolver State Farm in Mira Mesa, and Lance Growth, a real estate attorney and CEO of Growth 1031. And, as of last year, Black San Diego went from being only an LLC (a limited liability company) to an official 501©(3) nonprofit organization as well.

On Facebook, Black San Diego has over 36,000 members and its newsletter goes out to close to 1,000 subscribers, she said, most of which learn about the group via word of mouth. Black San Diego has a strong military population, Smith added, and frequently gets testimonials from business owners around town about how the organization has helped them.

“One Black-owned beauty supply store, Berlen’s Beauty Supply (in National City), said once it started to share on our page, the company experienced a 30% growth in business,” said Smith. “After we posted about Eden San Diego (a Black-owned plant nursery in University Heights) on our Instagram page, there was a line out the door the next day of people that heard about the company through us wanting to buy plants from them. And once a waitress at Louisiana Purchase (a restaurant in North Park) came up to us and said she was employed there off a post we put up on Black San Diego. It literally only takes one post.”

Moving forward, Smith and Jones said they want to launch a workshop program that will provide Black San Diego-based business owners the necessary tools to continue to grow their business.

The three main areas of focus will be “start”, “develop” and “sustain”, said Jones, adding that it would cost about $500 per business to go through the workshop program. To fund the effort, Smith said they’ve created sponsorship packets with tiered pricing options, ranging from $1,000 to $5,000, that can be found via Black San Diego’s official website: OurBSD.com.