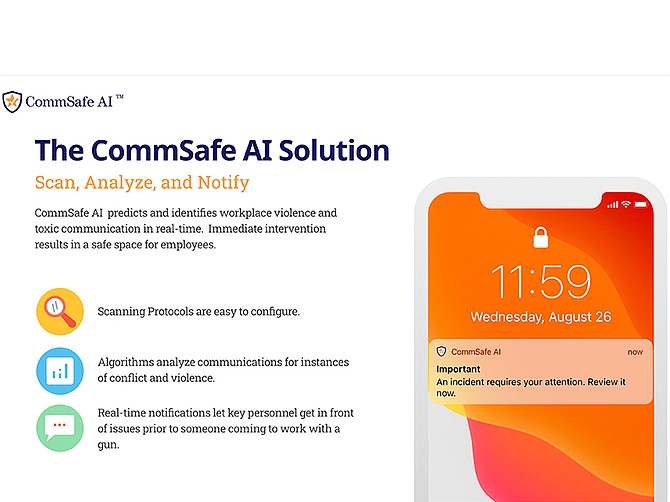 Photo courtesy of CommSafe AI. CommSafe AI is currently in beta testing with select clients, the company plans to release the full version to the commercial market in Q3 or Q4.

After retiring from the United States Navy, Ty Smith founded CommSafe AI, a Black-owned technology company that specializes in conflict and violence prevention.

CEO and co-founder at CommSafe AI, Ty Smith said he got the idea for the company after realizing there was no leading solution that provides a systematic way to become aware of violent-related issues in real-time.

“I founded CommSafe AI because there was no systematic way to identify these issues as they arise in real-time,” said Smith. “Toxic organizational communication has a very detrimental impact on employees as well as organizations. This communication can lead to patterns of bullying, harassment, sexual harassment, aggression, escalated conflict, threats, discrimination, and violence.”

Formerly called Vigilance Risk Solutions, CommSafe AI has introduced the first-to-market Software-as-a-Service (SaaS) tool that allows organizations to get ahead of threats and violence in the workplace before they happen.

Its technology works by analyzing communication in real-time and flags toxic messages — similar to the algorithm of an email spam filter — that would threaten the integrity of a safe communication space or violate shared company values.

In particular, it uses algorithms that can “track tone of voice,” and can pick up when a message is insulting, according to Smith.

In addition to alerting management of an issue, it also provides “next step” recommendations. For example, the system would suggest customized coaching for well-meaning employees to help them increase their communication awareness and sensitivity.

“Deterring or capturing toxic interactions early before they further escalate or deepen their harm allows organizations to focus on building a positive, inclusive culture while protecting employees,” said Smith.

“There is an enormous hunger for this type of tool, whether employees are in the office or continue to work virtually,” he added.

The physical security market in the U.S. is valued at roughly $53 billion. A high growth market , it’s projected to grow at 9% year-over-year up till 2025.

Before the pandemic, Commsafe AI provided its clients primarily with web-based training courses and has since pivoted its business to become a 100% SaaS company.

Focused on developing its CommSafe AI software, it is currently going through beta testing with select clients. The company plans to release the full version to the commercial market in Q3 or Q4.

The company didn't disclose annual revenue numbers, but the company has seen 300% revenue growth over the last five years, according to Smith.

To date, the company has raised over $1 million in pre-seed funding from investors. In addition, CommSafe AI was accepted into the La Jolla-based EvoNexus, the region’s biggest tech startup incubator to help scale its software.

“Raising money as an African-American founder, is hard, doing it in San Diego is almost mission impossible,” said Smith. “The fact that we’ve raised over 1 million in investor funding is something I rarely pat myself on the back on.”

“At times it’s been disheartening and frustrating, but when it comes down to it  —  I remember I’ve done hard things before and keep going,” he added.

Since founding CommSafe AI, Smith has assembled an executive team that includes top military and law enforcement veterans, as well as experts in conflict and violence prevention.

Smith’s service to the nation spanned 20 years of honorable service to include six combat tours to Iraq, the United Arab Emirates, and Afghanistan.

He earned a Master of Business for Veterans from the University of Southern California, Marshall School of Business, where he currently serves as a member of the Marshall Business School Board of Counselors. A retired Navy SEAL, Smith is also a mentor at the San Diego State University Lavin Entrepreneurship Center and The Honor Foundation.