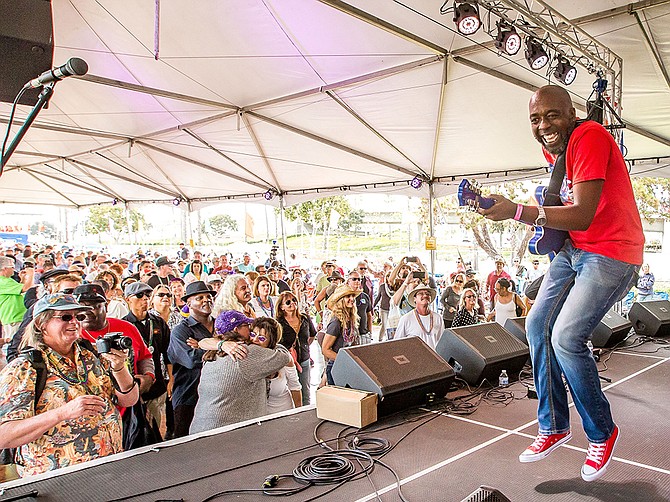 Photo Courtesy of Gator by the Bay Gator by the Bay, the annual Louisiana-inspired annual festival, will mark a return in 2022 after two years of dormancy. Photo is from the 2019 event.


After a two-year hiatus, Gator by the Bay, the annual Louisiana-inspired four-day music and food festival, will return in 2022.

According to organizers, Gator by the Bay will be held next year from May 5 to May 8 at Spanish Landing Park, across the street from the San Diego International Airport.

In 2019, the event welcomed over 15,000 attendees and held over 100 performances, said Peter Oliver, festival producer.

This year Gator by the Bay, with a reported economic impact of over $5 million annually, is expected to draw similar crowds, he said.

“Gator by the Bay is a one-of-a-kind event that brings joy and lasting memories to people of all ages,” said Oliver. “Each year, over 15,000 passionate enthusiasts attend this event to get a taste of Louisiana’s rich culture on the West Coast. After two years of dormancy, we are happy to be back with all the fan-favorite Mardi Gras experiences including samples of the history, food, music, dancing, and more.”

Founded in 2001, the festival counts on enthusiasts from throughout California and 39 other U.S. states, added Oliver, as well as Canada, Mexico, Europe, Asia, New Zealand and Australia.

In 2019, Catherine Miller, a producer for the Gator by the Bay annual Zydeco, told San Diego Business Journal that the now 19-year-old event “generates between 1,100 and 1,300 hotel room nights for the city of San Diego.”

The four-day family Gator by the Bay event is presented by the Bon Temps Social Club of San Diego. The nonprofit’s purpose is to promote the enjoyment and understanding of Cajun and zydeco music and dance styles as well as create a community of like-minded individuals.

Gator by the Bay “brings the spirit of New Orleans and bayous of Louisiana” for a celebration best known as Southern California’s Mardi Gras in May, according to the organization.

Per usual, next year’s event will feature a robust music line-up delivered via seven music stages. This includes performances from Grammy award winning Steve Riley, the rock and metal drummer, and Sugarray Rayford, the soul blues singer and songwriter, among others.

Louisiana comfort food will also be sold and a Mardi Gras costume parade will take place, said Oliver, along with a handful of new experiences that will be held throughout the multi-day stretch. A staple event that will make a comeback this year is Gator by the Bay’s chef-led gumbo cook-off, he said, for which it brings over 10,000 pounds of crawfish per year from Louisiana to San Diego.

After the two-year hiatus, it comes as little or no surprise that Gator by the Bay - and other events like it - will return.

According to experts, big events are back, including concerts, festivals and sports, all of which are expected to revert to their pre-pandemic numbers – and glory. Event professionals see the number of events and event attendance reaching and potentially surpassing pre-pandemic levels, according to a recently published report by Vox.com, the news and opinion website owned by Vox Media.

This is as a result of pent-up demand and the continued roll-out of the vaccination, the report states.