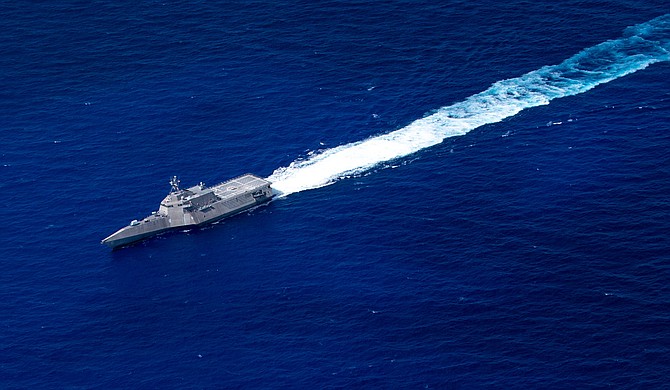 The Littoral Combat Ship USS Jackson, based in San Diego, transits the Pacific Ocean on Aug. 3. Three contractors received awards to sustain such ships during the next few years. Photo courtesy of U.S. Navy.

Delivery orders will be competitively awarded under these contracts, which are to be performed in San Diego (58%); outside the continental U.S. (28%); and in other continental U.S. (14%) locations, as appropriate. Each of the contracts has an estimated ordering period of 19 months, which is expected to end in February 2023.

These contracts were competitively procured using full and open competition with three offers received via the beta.sam.gov website. The Naval Sea Systems Command of Washington, D.C. awarded the contracts, announced on Aug. 4.

Heffler to Build in Monterey

The U.S. Navy awarded Soltek Pacific Construction Co. a $38.5 million task order under a previously awarded multiple-award construction contract for design and repair of the thermal dynamic testing facility (also known as T-Range) complex at Naval Air Weapons Station China Lake. The task order also contains one planned modification which, if exercised, would increase the cumulative task order value to $38.6 million. Work will be performed in Ridgecrest in California’s Mojave Desert and is expected to be completed by December 2024. Two proposals were received for this task order. The Naval Facilities Engineering Systems Command Southwest in San Diego awarded the contract, announced on July 29.

The U.S. Navy awarded RQ Construction LLC of Carlsbad a $10.3 million modification to increase the maximum dollar value of an existing task order for the repair and maintenance of Michelson Laboratory Wings 2-5 at Naval Air Weapons Station China Lake. After award of this modification, the total cumulative contract value will be $92.5 million. Work is expected to be completed by July 2023.

The U.S. Navy awarded Harper Construction Co. Inc. a $7.7 million modification to increase the maximum dollar value of an existing task order for the construction of Michelson Mission Systems Integration Laboratory at Naval Air Weapons Station China Lake. After award of this modification, the total cumulative contract value will be $106 million. Work is expected to be completed by November 2022. The Naval Facilities Engineering Systems Command, China Lake, awarded the latter two contracts, announced on Aug. 5 and Aug. 9.

The U.S. Army awarded General Atomics Aeronautical Systems Inc. of Poway a $14.8 million contract modification for Gray Eagle full rate production and ground support equipment. Gray Eagle is the Army version of GA-ASI’s Predator aircraft. Work is expected to run through May 2023. The U.S. Army Contracting Command at Redstone Arsenal, Alabama awarded the deal on July 29. The Defense Department announced it on July 30.

The U.S. Navy awarded American Systems of Lexington Park, Maryland an indefinite delivery, indefinite quantity contract that could be worth as much as $165 million. The contract provides software engineering and technical support services in support of a wide range of naval air programs for aircraft systems and subsystems for the Naval Air Systems Command software engineering department. Three percent of the work, worth up to $5 million, will be performed at North Island. Work is expected to be completed in August 2026. This contract was competitively procured via an electronic request for proposal; four offers were received. The Naval Air Warfare Center Aircraft Division at Patuxent River, Maryland awarded the contract, announced on July 30.