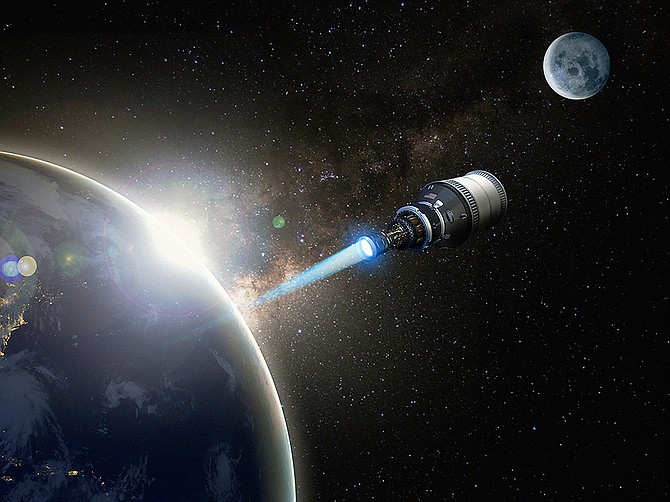 An illustration from the Pentagon’s advanced projects office shows a rocket using nuclear thermal propulsion. General Atomics is one of three contractors on the project. Rendering courtesy of DARPA.

The Defense Advanced Research Projects Agency (DARPA) awarded General Atomics a $22.2 million contract for the initial phase of the DRACO program. The program’s goal is to demonstrate a nuclear thermal propulsion (NPT) system above low Earth orbit in 2025. The two other prime contractors on the project are Blue Origin and Lockheed Martin (NYSE: LMT).

In a previous interview, a General Atomics executive said such a rocket would not be used in Earth’s atmosphere.

The deal was announced on April 9. Roughly three-quarters of the work (71%) will be performed in San Diego, with the balance in Louisville, Colorado; Rockville, Maryland; Seattle, Washington; and Cullman, Alabama, with an estimated completion date of October 2022.

DRACO stands for Demonstration Rocket for Agile Cislunar Operations. Cislunar is a term referring to the space between the Earth and the moon.

DARPA, the Pentagon’s advanced technology office, said in a statement that “rapid maneuver” is a core tenet of modern Department of Defense (DoD) operations on land, at sea and in the air. However, rapid maneuver in the space domain has traditionally been challenging because current electric and chemical space propulsion systems have drawbacks in thrust-to-weight and propellant efficiency, respectively. DRACO’s NTP system has the potential to achieve high thrust-to-weight ratios similar to in-space chemical propulsion and approach the high propellant efficiency of electric systems. This combination would give a DRACO spacecraft greater agility to implement DoD’s core tenet of rapid maneuver in cislunar space.

“The performer teams have demonstrated capabilities to develop and deploy advanced reactor, propulsion and spacecraft systems,” said Maj. Nathan Greiner of the U.S. Air Force, program manager for DRACO. “The NTP technology we seek to develop and demonstrate under the DRACO program aims to be foundational to future operations in space.”

Phase 1 of the program will last 18 months and consist of two tracks. Track A will entail the preliminary design of an NTP reactor and propulsion subsystem concept. Track B will produce an Operational System (OS) spacecraft concept to meet mission objectives and design a Demonstration System (DS) spacecraft concept.

“This first phase of the DRACO program is a risk reduction effort that will enable us to sprint toward an on-orbit demonstration in later phases,” Greiner said.

The Department of the Navy awarded General Atomics Aeronautical Systems Inc. of Poway a $13.1 million modification to a previously awarded contract. Under the deal, the U.S. Marine Corps will procure mission kits, ground support equipment, spares, element communications gear and additional required equipment in support of the MQ-9A Reaper unmanned air systems. Most of the work will be performed in Manama, Bahrain. The balance will be performed in Poway as well as Yuma, Arizona, and is expected to be completed in August. The Naval Air Systems Command, Patuxent River, Maryland awarded the contract, announced on March 31.

Cubic Corp. (NYSE:CUB) announced on March 24 that its Nuvotronics business received a contract worth more than $10 million from the Department of Defense through the National Spectrum Consortium to develop a dual-band, ultra-high performance and low size, weight and power (SWaP) fifth generation (5G) wireless network communications transceiver (WNCT) for military applications. Cubic Nuvotronics will support the DoD’s “5G to Next G” Program which was established to accelerate the implementation of wireless communications for the military. WNCT’s simultaneous dual-band operation provides greater operational resiliency and ensures high-speed data with low latency, with no interference on current DoD frequencies.

The point of the program, according to Cubic, is to develop an advanced backhaul radio to support the future throughput rates associated with increased data demands and need for spectrum use agility. The ultra-compact 5G backhaul leverages Nuvotronics’ patented PolyStrata three-dimensional (3D) microelectronic radio frequency (RF) fabrication process to ensure a robust, scalable and secure wireless data transport solution in support of the 5G network enhancement for the Augmented Reality/Virtual Reality (AR/VR) networks and Next Generation (Next-G) Government initiatives.

“As network demands increase and more devices are connected, connectivity in millimeter wave spectrum is critical to support higher throughput demands,” said Martin Amen, vice president and general manager of Cubic Nuvotronics. “Nuvotronics’ WNCT solution provides the ability to access this spectrum, allowing an ultra-fast, low-cost and high data rate solution to meet the demand, which is perfect for the adoption in AR/VR.”

Cubic Nuvotronics will work with the U.S. Army program office known as PEO STRI, as well as Joint Base Lewis-McChord and industry partners including Nokia and the Wireless Research Center (WRC) over a period of three years on the project. The DoD announced it will be awarding $600 million to contractors for “5G experimentation” at five military test sites with successful projects anticipated to support the DoD’s more than 4,800 sites and 560,000 facilities around the world.