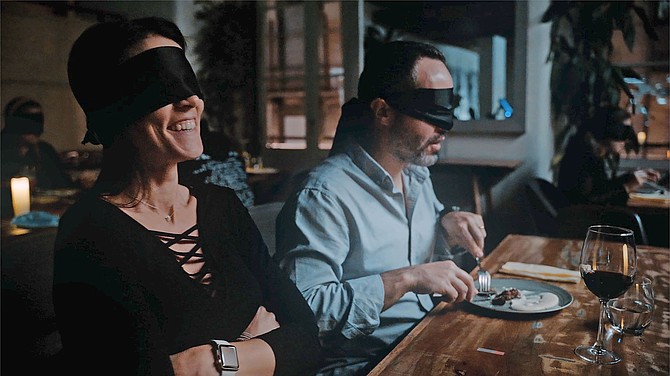 Fever, a Madrid-based entertainment discovery platform, is bringing its “Dining in the Dark” culinary activation to San Diego. Photo Courtesy of Fever.

Dining in the Dark, a gastronomic activation through which patrons eat with blindfolds on, is coming to San Diego.

Hosted by Fever, a Madrid-based entertainment discovery platform, Dining in the Dark will take place at an as-yet-unannounced local venue starting May 26, said Mariano Otero, vice president and general manager for Fever. It will run for 10 weeks, of which eight weeks have already completely sold out, he said.

The cost is $90/person, not including alcoholic beverages. Two three-course meal sessions will be held per day – 6 p.m. and 8:30 p.m. – hosting up to 50 people each. Diners can choose between meat, seafood or vegan, but everything else will be a surprise to the palate, said Otero, adding that the company will most likely extend the pop-up locally as long as there is demand for it.

“Following the popularity of Dining in the Dark among our community in many of our other markets, particularly Europe and Australia, it felt a natural next step to continue our expansion of this original concept across North America,” said Otero. “Dining in the Dark is a unique dining experience that takes eating out to a whole new level and has been tailored to adhere to restrictions during this post pandemic era. The experience not only offers an innovative way to engage with our community, but also provides opportunities for those who have been adversely affected by the pandemic, by partnering with local venues and leading chefs, producers and restaurateurs we are able to offer visibility for these partners through our platform and by reinventing the dining experience, encourage people safely back into restaurants.”

Scott Forrest, project manager at Fever, said San Diego was a target market for the Dining in the Dark expansion because of various reasons, including the size of the proclaimed foodie city and spending habits of San Diegans.

“Aside from things like the size of the city and expenditure, we also take into consideration possible locations of restaurants,” he said, adding that the San Diego venue has not been finalized and might change down the line. The menu, Otero said, will most likely change as well as it will be seasonal.

Dining in the Dark was first launched in July 2020 in the United Kingdom, said Forrest, and came up when the Fever team explored potential COVID-safe events to launch and promote.

“We wanted an event where people couldn’t break their social bubbles,” said Forrest. “An event that allowed us to have people in the dark, unable to move and that seemed a safe way to dine.”

Dining in the Dark is currently in 17 cities in the United States, he said.

Dining in the Dark isn’t the only event that Fever plans to bring to America’s Finest City.

According to Forrest, the company, which launched in 2015 with the mission of promoting and creating innovative events, kicked of its Candlelight series in 2019. It’s a music concert performed by classical or jazz musicians, he explained, that takes place in historic venues like cathedrals and churches, with up to 2,000 candles lighting up the space.

Candlelight is currently in eight cities around the world, said Forrest, and will be coming to San Diego soon.