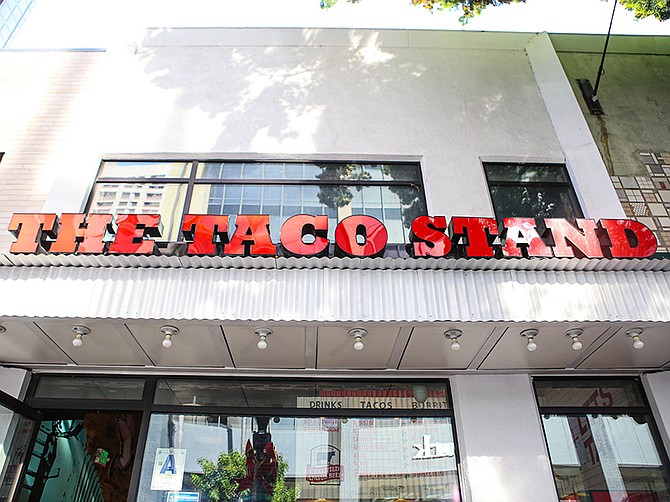 Photo courtesy of Downtown San Diego Partnership. The Taco Stand is one of more than 50 participating restaurants in the Downtown Loyalty Gift Card Program.

In line with its mission to support and promote downtown businesses, the Downtown San Diego Partnership is helping the area’s restaurants improve their bottom lines during the pandemic.

Through a new, innovative initiative called the Downtown Loyalty Gift Card Program, purchasers can buy $35 gift cards to any of the more than 50 participating restaurants and retailers for the price of $25. Downtown businesses involved include Yoga One, Cowboy Star Restaurant and Butcher Shop and Blue Bottle Coffee Co., among others.

The first round, launched in August, sold 700 cards in four days and raised $23,000 in revenue. The second, which kicked off Sept. 15, moved 800 cards in five days and raised $28,000, for a combined total of $51,000. Now, Downtown San Diego Partnership is prepping for round three, slated to start sometime in October, with a fourth round following shortly after that, according to Betsy Brennan, president and CEO.

One hundred percent of all proceeds goes back to the restaurant operators, she said.

“The Downtown Loyalty Gift Card Program is a way to support local businesses downtown,” said Brennan. The extra $10 in each card’s value comes from philanthropic donations to the Partnership from the likes of Union Bank, ACE Parking, San Diego Padres and Cox Communications. “These are people that want downtown businesses to thrive and they know they are suffering during the pandemic. Our restaurants need this. With no conventions and no business travel, they need San Diegans to support them.”

As part of the initiative, Alex Gutierrez, director of special districts for the Downtown San Diego Partnership, said the organization also helped its downtown restaurant partners set up e-card programs on their respective websites — another tangible benefit for long-term use, he said.

“Many downtown restaurants are still facing an uphill battle because of COVID-19,” said Gutierrez. “This process has been a critical step for some small business owners to work with the Downtown Partnership team to update their POS [point of sale] systems to make gift card purchases possible. Upgrades that will hopefully serve them far into the future beyond each sale.”

The idea for the Downtown Loyalty Gift Card Program came from Sumeet Parekh, managing partner at HP Investors and a board member of the Downtown San Diego Partnership, said Brennan. Parekh owns more than 30 properties downtown, she said, and during a brainstorming meeting, posed the question: How do we support restaurants and small businesses right away?

For round one, Brennan said the Downtown San Diego Partnership hosted the sale on its own. For round two, the organization teamed up with the California Restaurant Association for marketing, she said, and timed its release with “Dine Diego,” an initiative hosted by San Diego Restaurant Week for more exposure.

Because the Downtown San Diego Partnership has more than 300 members, Brennan said it was fairly easy to get in touch with restaurants and establishments to join the Gift Card Loyalty Program. She said the organization also runs the Downtown San Diego Partnership Clean & Safe initiative, which works with more than 30 restaurants in the city’s core, some of which are also participating in the gift card project.

“We work with restaurants and small businesses every day,” said Brennan, “maybe because they need their sidewalk power washed or need an escort for an employee at the end of their shift to get from work to their car late at night, a service we offer for free. There are others that we are working with to build out parklets and put street furniture out. So, we have all these different partnerships that existed and have been able to build new ones, including with Elixir Coffee, which is near our office. We didn’t have an existing relationship with them, so we asked them if they wanted to be part of our program.”

Brennan said all the restaurants that participated in round one decided to participate in round two, plus more. After seeing the success of the first round, a few new businesses hopped on board for the second installment, including retail establishments and yoga studios.