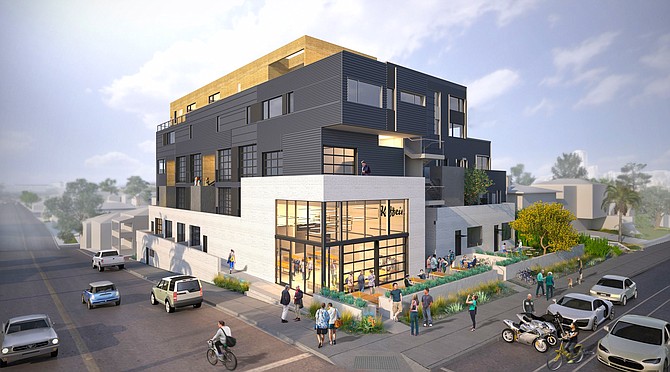 Buzz is a $9 million apartment project under construction on the east side of I-5 in Golden Hill. The architect is TFWA of Ocean Beach. Rendering courtesy of Rammy Urban Infill and Hub & Spoke Communities.

“The luxury apartment market is showing cracks,” Cortez said. “There’s a huge demand for housing by necessity – affordable market rate housing without government subsidy along transit and near job centers.”

Alemany said the target market for the projects he and Cortez build is “the missing middle,” which he described as “people who can’t afford Class A luxury apartments but make enough income that they don’t qualify for government housing.”

The pair specialize in small scale, infill developments of 40 to 50 apartments, Alemany said.

Their first project was Nest, a $4.5 million apartment building in Hillcrest at 4073 Albatross St. that was completed in August 2019 with 13 stacked flats and townhomes in a 53-foot tall building.

“There was a skinny infill site with less than 40 linear feet of frontage on the street,” Aleman said, adding that the apartments and townhomes were stacked to get higher density on the site.

Cortez and Alemany said that Nest “contributes to workforce housing in the neighborhood by offering floor plans smaller and more efficient than nearby luxury apartments at a fraction of the cost.”

The lower level has a garage with eight parking spaces. Because the project is near transit – two bus lines – parking requirements on the project were lessened.

“Recently, we installed bike lockers, which are private lockers, fully enclosed. The reason for that is we encourage alternative modes of transportation, encouraging people to get out of their cars,” Cortez said.

With two hospitals nearby, Nest was specifically designed to attract health care workers.

Among other things, Nest was built with sound dampening materials between floors and the apartments and townhomes come with blackout blinds to accommodate people who work night shifts, Cortez said.

“We talked to nurses from the hospitals and the feedback we got was the majority of the housing in the area was built in the 1960s and 1970s and the acoustics and the sound was very poor and there was no air conditioning. What they were looking for was a place that was quiet and that had air conditioning and blackout blinds,” Cortez said. “Anyone who lives in that neighborhood or has been in the medical complex of Hillcrest knows there are ambulances driving through every 15 minutes.”

While Nest is distinctive in style, at the same time, it was designed to fit in with the rest of the neighborhood with a timeless quality.

“A majority of newly constructed buildings are contemporary and they look like spaceships, they’re black and white and gray – very cold,” Cortez said. With warn earth tones, “It was important for us to build something that you couldn’t tell if it was built five years ago or more than 20 years ago and we let the structure of the building show.”

Connecting the project to the outdoors also was a key element in Nest’s design. The project has a 500 square-foot entry courtyard and all but one of the units has balconies of 80 square feet to 200 square feet and the one that doesn’t has roll-up garage-style doors, Cortez said.

“Every single unit has its own private outdoor space,” Alemany said.

Nest was nominated for a 2020 orchid award in the San Diego Architectural Foundations annual Orchid & Onion competition to highlight the best and worst architecture of 2019.

Orchids go to projects of special note and onions go to those that missed the mark.

Nest was cited as “a prime example of a thoughtful and well-crafted urban infill project, and the greater neighborhood opportunities they afford.”

Among those working on Nest were TDT Construction as construction manager, DiDonato Associates architects, with specialty metal work by Artist & Exile, murals by Rafael Lopez, custom hanging planters by San Diego Macramé and Product Etc., which made a concrete Nest sign. Construction financing of $3 million was provided by David Ibrahim of Cal Private Bank.

Nest was a hit before it was even finished, with half the units “leased solely off renderings” and the building fully leased by November, Cortez said.

The project proved to lenders that their idea of providing market-rate workforce housing as infill projects was viable and led to the second project by Cortez and Alemany – Buzz.

Buzz is a $9 million mixed-use apartment building that’s under construction in Golden Hill at 1144 30th St. with nine traditional apartments, three co-living suites, six short term vacation rentals, and a restaurant. The three co-living suites have five to 10 lofts each that share kitchens to keep the rental costs down and encourage a strong social dynamic, Cortez said.

The architect on the project was TFWA based in Ocean Beach.

Built on a high point in Golden Hill, Buzz has panoramic views of the downtown skyline, San Diego Bay, Coronado Bridge and Tijuana.

Monthly rents will likely be about $1,500, Cortez said.

As of late September, the project was about 80% complete, Cortez said.

“We designed the highest massing along 30th Street, which is a commercial corridor, and it steps down on B Street to blend in with the residential community,” Cortez said. n