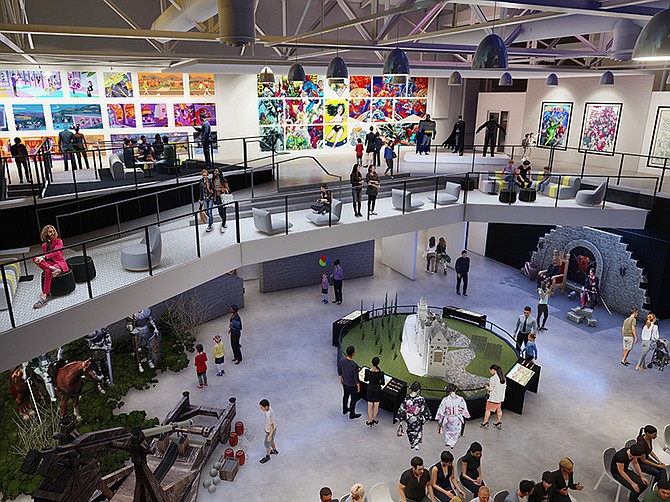 San Diego will finally open the doors to the highly anticipated Comic-Con Museum next summer.

A division of the San Diego Comic Convention, the nonprofit has raised roughly $17 million of its $34 million funding goal. It anticipates hosting 100,000 visitors a year upon opening and to be a substantial economic driver to the city.

The Comic-Con Museum will be housed in the 68,000-square-foot former San Diego Hall of Champions building located in the Palisades, the southern section of Balboa Park. Thanks to a $175,000 donation from Cox Communications, renovations will begin with Comic-Con Museum’s Education Center, the Cox Innovation lab.

The 6,000-square-foot classroom space will serve educators for grades pre-K through 12, community groups such as summer camps and book clubs, and museum visitors looking for comics and popular art-related enrichment.

Full renovations, dubbed the Long-Range Comprehensive Plan, will go through 2024, according to Melissa Peterman, vice president of development.

“Over the last couple of years, the museum has been creating special programming and activities,” she said. “The vision we are sharing now will be rolled out in phases over several years. We anticipate opening our doors in the summer of 2021 as a fully functioning museum with rotating exhibits and a year-round schedule of programs.”

Activations include panels, creator meet-and-greets, experiential cinema, watch parties, eSports, cosplay shows and concerts, among other planned experiences. As part of the multi-year phased plan, Comic-Con Museum will add 25,000 square feet of space for a café, a gift shop and a 4K video theater and presentation space.

Peterman said the expansion will be made possible thanks to charitable contributions from nearly 14,000 charter members, who paid between $10 and $1,200 for their memberships, as well as stakeholders. The latter include the city of San Diego, David C. Copley Foundation, DC Entertainment, AT&T, SDG&E, Legler Benbough Foundation, U.S. Bank, eBay and the Mandell Weiss Charitable Foundation.

Patti Roscoe, chair of the museum, said the attraction will not only breathe “renewed life and energy” into the park and the city. The hope is that it will be a catalyst for San Diego’s economic recovery.

“The space … represents new beginnings on so many levels,” she said. “It’s an opportunity for the museum to play a role in San Diego’s economic recovery and resurging tourism industry. We see the museum as a wonderful addition to Balboa Park, which is already a vital tourism attraction that draws visitors from all over the world.”

“We are hopeful in the role the Comic-Con Museum will play in those efforts and in helping to revitalize the Palisades area of Balboa Park, which isn’t as heavily trafficked as Plaza de Panama,” added the museum’s Peterman.

“In a normal year, the Balboa Park Cultural District delivers over $670 million in economic impact for the city of San Diego,” said Peter Comiskey, executive director at the Balboa Park Cultural Partnership. “We can be certain that the introduction of such a unique destination venue with such a strong and identifiable brand will elevate that further.”

Miro Copic, marketing lecturer at San Diego State University, said the opening of the Comic-Con Museum will certainly be helpful in boosting the region’s economy. Unlike the previous tenant, the San Diego Hall of Champions, the Comic-Con Museum is a global destination of pop culture and art, he said, that can attract new visitors from nearly anywhere in the world.

“People that come to Comic-Con are huge fans, but they are limited in space as well as time when they come to the convention,” he said. “This will be interesting to a wide variety of tourists because at the museum, they can convene, they can learn about comics, and it will continue to offer them new things to consider in that it will have a popular culture component that will always need to be updated. That in itself will make it a really exciting experience and should be something this city is extremely proud of.”

While the museum hasn’t opened its doors yet – other than hosting one-off events at the venue the last two years – it has already begun to make its presence felt with the addition of the Comic-Con Museum at home online programming, launched in the spring.

As part of the virtual classes, the museum releases weekly activity books and offers online art education on topics like how to make a comic book, a collaboration with National City-based nonprofit A Reason to Survive (ARTS).

Upon opening, Peterman said visitors can expect similar in-person programming, including series on the art of storytelling, the science of superheroes and costume design.

“We want to be able to touch on all the different components of pop culture,” she said, “and expose folks to elements they may not have known about before.”

Added David Glanzer, chief communications and strategy officer for Comic-Con: “The spirit of Comic-Con has always extended beyond the conventions and that’s why we are very excited to be able to capture and share this creative energy in a space that is designed to be participatory, educational and, most of all, fun. Comic-Con is about creativity and collaboration and the promotion of oftentimes unrecognized forms of art. We look forward to the museum evolving forward with the support of so many people who will benefit from this unique institution.”