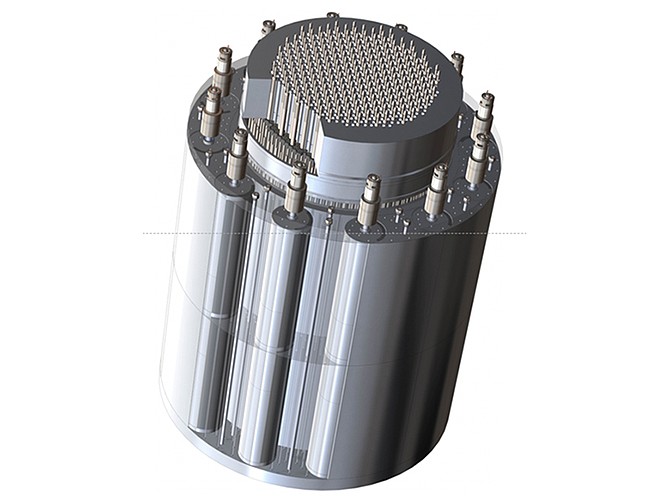 Nuclear-powered spacecraft may be moving from science fiction to reality, with General Atomics Electromagnetic Systems helping with the engineering details.

GA-EMS has been working on a nuclear thermal propulsion concept under a deal with NASA and the space agency’s contractor, Analytical Mechanics Associates. Financial terms of the agreement were not disclosed. The San Diego business announced on Sept. 9 that it delivered its work to the space agency.

The nuclear thermal propulsion (or NTP) reactor was designed for a future NASA mission to Mars.

In nuclear thermal propulsion, a spacecraft’s onboard nuclear reactor heats an element such as liquid hydrogen, which expands into a gas and propels the craft through space.

“GA-EMS is uniquely positioned to develop and deliver a cost effective, safe NTP reactor system to progress future space missions,” said Scott Forney, president of GA-EMS, in a statement distributed by the company. “This is an exciting effort that directly aligns with our 60-plus years of nuclear energy research and development, including nuclear reactor design and deployment and our expertise in space systems. We are excited to contribute our ideas to the next generation of space exploration for our country and our world.”

GA has a long history of working with nuclear power. In the 1950s, the business developed its TRIGA reactor, frequently found at universities and in research settings. The letters stand for Training, Research, Isotopes, General Atomics.

The concept of a reactor powered spaceship is just about as old. In the 1960s, GA was involved in Project Rover, where the U.S. government designed a nuclear thermal rocket that was ultimately never used.

NASA engineers say nuclear thermal propulsion reactors could drive spacecraft faster than conventional chemical rockets, benefiting the humans who travel on them. “First generation NTP systems could cut total mission duration in half, while still leaving adequate time for Mars surface exploration,” said a NASA paper from 2018. In addition, the system would offer more flexibility in case astronauts had to abort their mission.

The same paper said that the introduction of nuclear thermal propulsion would be analogous to going from a propeller powered DC-3 aircraft to a jet-powered SR-71 Blackbird aircraft capable of flying at 2,000 mph.

In an interview earlier this year, Dr. Christina Back, Ph.D. said that conventional chemical rockets would do the initial work of lifting spaceships from the Earth’s surface into orbit. Once in space, nuclear thermal propulsion reactors would be used. Back is vice president of nuclear technologies and materials at GA-EMS.

The National Academies of Sciences, Engineering and Medicine’s Committee on Space Nuclear Technologies recently invited GA-EMS to brief it on its nuclear thermal propulsion concept.

“Our team was extremely honored to present our ideas for a NTP reactor design to the NAS [National Academy of Sciences] committee,” said Back. “NTP systems for NASA human Mars missions are achievable in the near-term, and our solution takes advantage of cutting-edge advances, especially with nuclear fuel and high temperature ceramic matrix composite materials. By applying modern science and engineering methods, GA-EMS is reducing risk in space NTP technology development and rapidly advancing the state-of-the-art.”