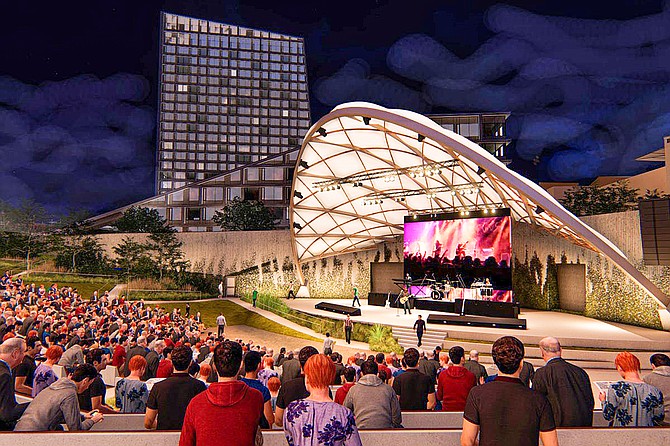 A $50 million amphitheater and surrounding grounds is being built near the new trolley stop at the University of California San Diego. Rendering courtesy of Safdie Rabines.

An outdoor amphitheater that can accommodate nearly 3,000 people will be a central part of what the University of California San Diego is calling its new front door.

Designed by Safdie Rabines Architects of Mission Hills with BNBuilders of Sorrento Valley as the general contractor, the $50 million amphitheater and surrounding grounds is meant to be the venue for everything from impromptu student performances to large outdoor concerts and theatrical performances.

“I really think this is going to be a central focus point for the campus, especially as you come in off the light rail. When you walk through that open space and come upon the amphitheater, you really have a sense of place,” said Jamie Awford, principal of BNBuilders.

The amphitheater is being built into the edge of Pepper Canyon at the Pepper Canyon trolley stop of the new trolley line to UC San Diego scheduled to open in 2021.

It shares a site with a new 74,0000 square-foot Design and Innovation Building, also being built by BNBuilders and designed by EHDD of San Francisco, and an existing 183,000 square-foot Structural Materials Engineering Building.

“It kind of naturally fits there along with the other projects that are going in around the amphitheater,” Awford said. “It’s really going to be a unique space, not only for UC San Diego and the students on campus, but for the community as well.”

The university “is kind of blurring the edges of the campus to make it more open and inviting for people to come in,” Awford said.

Coming off the trolley, the amphitheater will be the first thing people see as they enter the campus, said Richardo Rabines, co-founder of Safdie Rabines Architects.

“It’s going to be very noticeable and visible,” Rabines said, adding that the amphitheater is unusual in that it was designed as a park with a 10,000 square-foot lawn that also functions as an informal seating area.

“The challenge has been to convert a canyon into a park, to create a welcoming place of arrival, a place of gathering and cultural celebration and to introduce a front door to the campus,” Rabine said. “It’s creating an amphitheater that’s a park. That dualism is interesting and it fits on the canyon,” Rabines said. “The canyon has been transformed from a very natural canyon”

The amphitheater grounds step down from the top of the canyon to the stage itself.The shell about the stage is about 4,000 square feet and made of a translucent material that lets natural light filter through.

At its peak, the shell is about 40 feet tall and is shaped to resemble a pepper seed in a nod to the name of the canyon’s natural vegetation.

Shade canopy poles are located throughout the space to support even the most complex stage rigging, audio-visual systems and broadcasting needs, according to Safdie Rabines’ website.

The amphitheater also has two large computerized video screens that could be used to show movies and for video class presentations as well as included in theatrical performances.

Approaching the stage across a grassy area are concrete benches with wooden accents arranged in a semi-circle to provide seating for about 1,500 people, Rabines said.

The lawn to the rear of the site has room for about an additional 1,500 people.

The amphitheater and surrounding landscape work should be finished by the end of the year or early January, said Awford of BNBuilders.

Along with the amphitheater, BNBuilders is constructing what the university calls a “public realm” around the site.

“It will be a combination of green space, pavers and art work that will draw people into that part of the campus and connect through the other portions of the campus as you move through the campus spine,” Awford said. “The university has spent a lot of time making sure they preserve as much open space as possible.”

Awford said construction is proceeding without any serious delays despite the COVID-19 pandemic and protocols that had to be put in place as a result.

“We have continued to progress and stay on schedule, with the topping off recently,” Awford said.