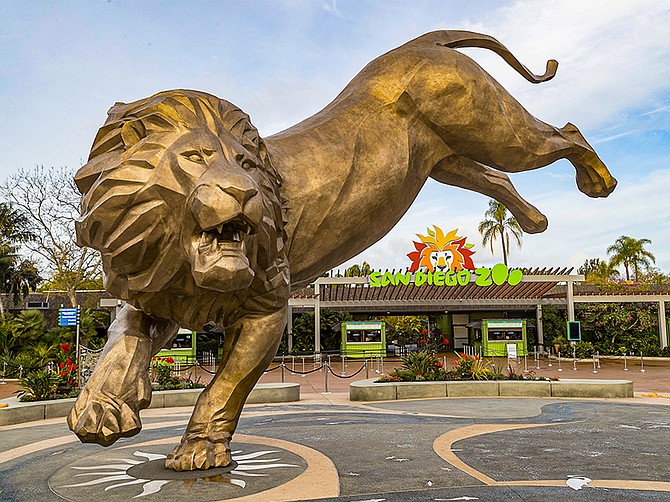 Since 1984, San Diego Zoo Global has hosted its “Rendezvous in the Zoo” (R.I.T.Z.) celebratory and fundraiser gala at the peak of summer, held at the San Diego Zoo and attended by roughly 1,000 guests at up to $500/per ticket.

San Diego Zoo Global has not only pushed the event back a few weeks, so not to coincide with the Zoo’s reopening in June, it’s also taken the entire affair off the Zoo grounds and on to the world wide web for the first time in its 36-year history.

While going virtual is new territory for San Diego Zoo Global, the ultimate goal is to reach more people, including attendees from outside of San Diego County, and raise even more funds than in previous years.

Held on Sept. 12, the VIP portion of the night, which no meal included. dinner service from Eddie V’s Prime Seafood restaurant and a bottle of champagne delivered to participants’ homes, was completely sold out, according to the company. With no actual head count limit this time around, San Diego Zoo Global was still signing people on at a discounted rate of $100 per person just days before the event took place, no meal included.

“This is all new territory for us,” he said. “Historically, the event takes place on the ground, with a limited capacity based on tables and chairs, so, it has been somewhat capsized. Going out to a larger social media audience – we’ve never done something like this and I’m excited about how broad we could go. It suddenly turns into a global event or people tuning in from different continents and from across the world. This is certainly a special experiment for us.”

In addition to R.I.T.Z., San Diego Zoo Global hosted a 10-day silent auction on www.sandiegozoo.org, which kicked off Sept. 4, through which folks had the opportunity to bid on items like artwork, jewelry and curated vacation packages. Funds raised through the auction and the fundraiser will support the urgent needs of wildlife at both the San Diego Zoo and the San Diego Zoo Safari Park and aid critically endangered species around the world through San Diego Zoo Global’s conservation work.

Also new this year is that some of the funds raised will go toward San Diego Zoo Global’s “Critical Needs” campaign, said Baribault. Launched during the pandemic, the purpose of the initiative is to maintain all critical services, including feeding wildlife and maintaining the grounds at the zoo, all of which has continued even while the destination was closed due to the global crisis.

“Traditionally, this event is about celebrating conservation achievement and the funds go to conservation work,’ said Baribault. “But this year, funds raised from this effort will also go toward supporting our “Critical Needs” campaign. During the pandemic, we have continued to operate and maintained all critical services… at 100% capacity. This ‘Critical Needs’ campaign is really to fund our work, to protect and care for wildlife here on the grounds and to continue our conservation work that has gone on while the zoo and the park have been closed.”

Because most of San Diego Zoo Global’s conservation fields involve living things, wildlife needed to be cared for and managed throughout the coronavirus crisis and stay-at-home orders, said Baribault. This is really an effort to raise awareness for those needs, he said, and “acknowledge that we’ve continued to do our part even during the period of closure.”