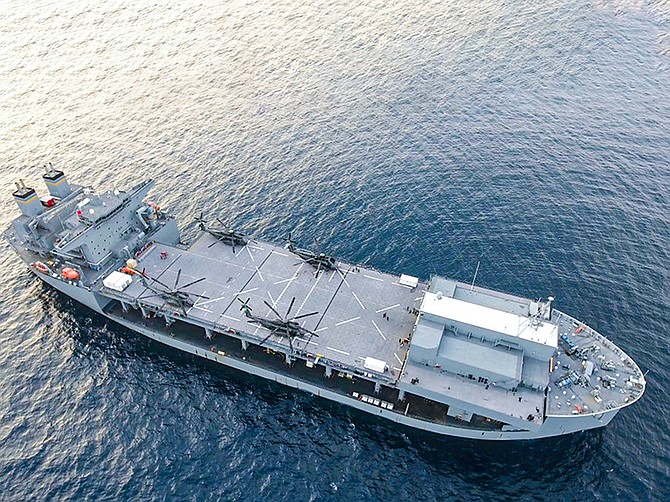 Photo courtesy of U.S. Navy. The USS Lewis B. Puller is an Expeditionary Sea Base ship built by General Dynamics NASSCO in Barrio Logan. The builder received a contract to increase berthing on subsequent ships of the same type.

The following are selected defense contracts awarded to San Diego County companies in July, August and September. They have been announced by the U.S. Department of Defense. Listings also include companies operating in San Diego County.

The U.S. Navy awarded General Dynamics NASSCO a $35.6 million modification to a previously awarded contract. The Forward House Habitability Modification is an engineering change proposal that applies to the sixth and seventh in a series of Expeditionary Sea Base ships. It modifies the ships’ berthing requirement to support an additional 100 military crew members.

The Expeditionary Sea Base is 784 feet long. It can support airborne mine countermeasures and special operations. Its flight accommodates four helicopters. As originally designed, the ship has 250 berths for its military detachment and 34 berths for a crew from the Military Sealift Command.

Work will be performed in San Diego and is expected to be completed by January 2024. The Supervisor of Shipbuilding, Bath, Detachment San Diego, awarded the contract, announced on Sept. 4.

The U.S. Navy awarded RQ Construction LLC of Carlsbad a $33.1 million task order under a multiple award construction contract for the design and construction of a new child development center complex at Marine Corps Air Station Miramar. The task order also contains one planned modification, which if exercised would increase the cumulative task order value to $33.3 million.

The work to be performed provides for two single story facilities for infants, pre-toddlers, toddlers and preschool aged children of military and authorized civilian personnel at MCAS Miramar. Combined total square footage for the two facilities shall not exceed 62,000 square feet. The center will provide adequate space for children between 6 weeks and 5 years of age. These two facilities combined will provide an essential facility offering military personnel and authorized civilians and their families with full time, quality childcare and development for about 462 children. The new facilities will be single story reinforced concrete masonry unit, reinforced concrete foundation, slab on grade and composite steel deck, standing seam metal roof over metal deck and steel framing.

Contractors to Supply Berths on Ships

Financial terms of the deal were unavailable. The Navy will spend up to $25.9 million under indefinite delivery, indefinite quantity contracts. The five-year deals may be extended for another six months, which would bring the contract ceiling to almost $29 million. The base ordering period is expected to be completed by August 2025; if the option is exercised, the ordering period will be completed by February 2026. The contracts were competitively procured with the solicitation posted on beta.sam.gov as a small business set-aside, with four offers received. The Naval Supply Systems Command Fleet Logistics Center in Norfolk, Virginia awarded the contracts, announced on Aug. 13.

The work to be performed provides for essential repairs to three natural gas/diesel fuel-fired water tube boilers, which provide hot water to the heating and cooling, domestic hot water and steam utilization systems of approximately 170 facilities. This project will include hydro testing, boiler inspections, emissions testing and provisions for the cybersecurity of facility-related control systems. Work is expected to be completed by November 2021. Four proposals were received for this task order. The Naval Facilities Engineering Command Southwest of San Diego awarded the contract, announced on July 30.