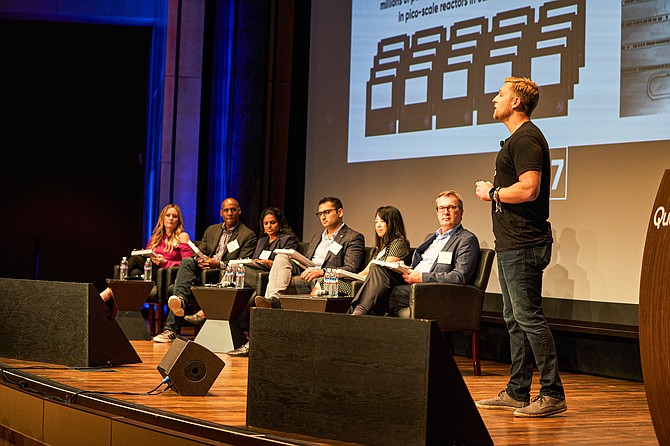 Three San Diego companies were awarded a total of $75,000 at the John G. Watson Quick Pitch competition last year. Photo courtesy of Outside the Lens.

It will allow Tech Coast Angels (TCA) to make investments of up to $500,000 quickly — in as little as 30 days — for promising startups.

The purpose of the new fund is to provide portfolio diversification for members, and attract the best startups with bigger checks and a clear process, said Ashok Kamal executive director of Tech Coast Angels.

“Not only have TCA’s annual funds accelerated our investing volume, but also they have amplified our investing performance,” said Kamal. “Recent local successes in TCA’s fund portfolio include Series A financings by GoSite and Visgenx, parabolic growth during COVID by Mercato, and the acquisition of Paradigm Diagnostics by Exact Sciences.”

This is the third annual fund launched by the San Diego angel network over the last three years.

The local investment chapter is adopting a unique annual fund model in which the investing decisions are democratically made by 200 TCA members, according to the organization.

The most recent fund, ACE Fund 20 invested $3.7 million in 19 companies including local startups Mercato, BlueNalu and Upcycle (in addition to Visgenx and Maxwell Biomedical).

“Last year our fund was $3.7M of a total of $12M invested by TCA — San Diego. This year we hope that our $4M fund is an indicator of increased early-stage investing across the ecosystem,” said Dean Rosenberg, vice president of funding for TCA.

According to new research by AngelList, a popular website for startups to raise capital from investors, broad-based angel investing remains the best strategy and serves as a value proposition for angel groups.

“Investors increase their expected return by indexing as broadly as possible at the seed stage (i.e., by putting money into every credible deal), because any selective policy for seed stage investing — absent perfect foresight — will eventually be outperformed by an indexing approach,” said Kyle Stanford, analyst at PitchBook.

Despite the global venture deal-making slowdown caused by the COVID-19 pandemic, Tech Coast Angels and many other investor groups remained open for business throughout the year.

“The record-breaking size of our annual investment fund this year shows that TCA members are committed to startup investing — even in a pandemic, in an election year, and with all of the other market volatility,” said Rosenberg.

In 2019, Tech Coast Angels’ San Diego chapter invested in 22 companies, with an average investment of $555,000 for new portfolio companies. To date, the group has invested a total of more than $6 million so far in 2020.

The latest ACE Fund is for both new and existing TCA portfolio companies.