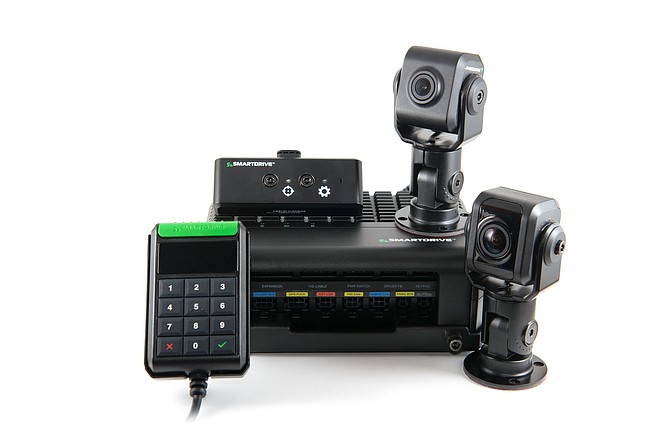 SmartDrive Systems, which offers video safety and telematics technology to operators of big-rig trucks and transit vehicles, has agreed to be bought by Dallas-based Omnitracs LLC. The two companies announced the deal Sept. 9. Terms were not disclosed, though one report in the financial media put its value at $450 million.

Omnitracs, which offers technology that complements SmartDrive’s, was previously part of Qualcomm Inc., and at one time was located in San Diego. Omnitracs moved to Dallas after Qualcomm sold it to Vista Equity Partners in 2013.

The SmartDrive business will remain in San Diego, said Omnitracs CEO Ray Greer, noting the region is a good source of talent in the areas of telematics, the Internet of Things and the convergence of hardware and software. Telematics is a term for a computer monitoring vehicle use with the help of sensors and wireless connectivity.

“From my point of view, it’s business as usual for them,” Greer said, adding that Omnitracs’ San Diego employees will move into SmartDrive’s facility.

Video is a technology that Omnitracs wanted to invest more in, Greer said, adding that “only 2%” of his workforce concentrates on video.

The video portion of SmartDrive’s offering exceeds that offered by Omnitracs, yet Omnitracs offers a variety of functions not on the SmartDrive system, such as route planning, hours of service and regulatory compliance.

By combining the talent and technology of both companies, Omnitracs said it will be able to offer a converged, end-to-end platform that optimizes safety, driver productivity and workflow, as well as routing, dispatch and compliance. Such a product would be an industry first, the two companies said.

The deal is expected to close in the fourth quarter.

SmartDrive’s in-cab cameras monitor commercial drivers, detect distraction or instances of risky driving, send video clips to SmartDrive and ultimately the operator’s corporate office, and give managers opportunities to counsel drivers to do better. Cameras are also aimed at the world around the vehicle; the video clips they collect also fight fraudulent insurance claims.

Mitgang, who has been at SmartDrive for eight years, said he planned to work on the integration of the two companies. “I’ll be around for a while,” he said.

Revenue was in the $11 million range when he joined the organization, he recalled. He said SmartDrive reached $100 million in revenue this year and that it continues to grow at 25%.

He described his emotions as a mixture of excitement at the demand for his product and the company’s growth potential, and melancholy since organizations inevitably change as they scale.

The deal came together in 90 days. “In this crazy world, this is an all Zoom transaction,” Mitgang said.

San Diego has several businesses in the telematics space. They include Netradyne and Lytx. Early this year, the Permira private equity firm invested more than $1 billion for a majority stake in Lytx. The entire transaction valued Lytx at $2.5 billion.