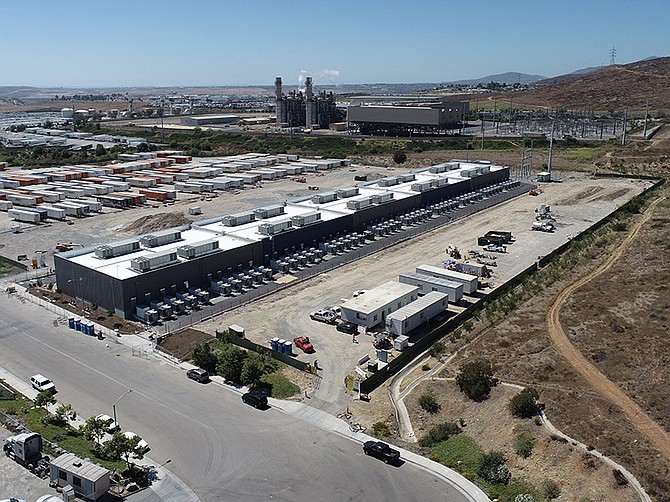 Otay Mesa is now home to the largest battery energy storage project in the world.

The Gateway Energy Storage project, which cost hundreds of millions of dollars, was developed and is operated by New York-based LS Power. On Aug. 19, LS announced that the 230-megawatt plant had been energized. By the end of August, it was expected to have a 250-megawatt capacity.

Much of the energy to be stored in the batteries will come from industrial-scale solar and wind power plants in the California desert. The power will travel via San Diego Gas & Electric Co.’s Sunrise Powerlink.

“We see battery storage as the future,” said Jason Anderson, CEO of the Cleantech San Diego trade organization. “The fact that we have the world’s largest in San Diego, I think that’s telling, especially as we continue down our path to 100% renewable energy.”

Battery storage plants are able to take solar energy generated during daylight or off-peak hours and store it for use later. LS Power said its Gateway project will reduce carbon emissions, improve grid reliability and reduce energy costs for consumers.

LS Power has operated a 40-megawatt battery storage plant in Vista since 2018. “Seeing it work and seeing it work well in the market built confidence that Gateway will work,” said Cody Hill, LS Power’s vice president of renewables.

Both the Gateway and Vista projects played a role in the drama of the last few weeks, when state energy consumption was high and grid operators said rolling blackouts may be necessary.

Hill said the business started its energy storage development efforts six years ago, reviewing power prices and studying locations around the country. Looking at the fundamentals of energy storage, the San Diego region is one of the most valuable locations nationally, he said. Geographically it is at the edge of the continent and needs resources. That is coupled with the region’s “aggressive” stance toward adopting solar power.

“Having a lot of solar on the grid drives opportunity,” he said.

A Link to the East

Otay Mesa, for its part, is an excellent location electrically, with proximity to high-voltage lines to the Imperial Valley and Arizona, he said.

SDG&E’s 120-mile Sunrise Powerlink stretches from Imperial County to San Diego. It went into service in 2012 after 18 months of construction and several more years of planning. The project cost $1.9 billion.

From an engineering standpoint, the Gateway project was “relatively straightforward,” Hill said. It contains 98 inverters connected to batteries. It is modular. “You’re kind of copying and pasting a design.”

Investors in the Gateway project were undisclosed. Hill said the company financed it with a combination of equity and debt.

LS Power is privately held and does not disclose revenue. It also invests in transmission lines, natural gas power plants and solar plants. It developed the 170-megawatt Centinela Solar Energy Project, covering 1,600 acres in the Imperial Valley; the project sells its output to SDG&E. The business also has investments in hydroelectric, coal and wind power plants.

The business is already planning a project that would take away the Otay Mesa plant’s claim as the world’s largest battery storage facility. A 316-megawatt storage facility is planned for the site of the Ravenswood power plant on the East River in Queens, New York. LS Power plans to build it in the next few years, Hill said.

Closer to the region, LS Power is planning the 125-megawatt LeConte Energy Storage facility in Calexico, Imperial County. A 200-megawatt plant is planned in the San Francisco Bay Area community of Pittsburg.

Hill said LS Power plans upgrades at the Gateway plant that will improve the duration of its service.

In other renewable energy news, Omaha, Nebraska-based Tenaska and an international firm, Capital Dynamics, are developing nine battery energy storage centers in the San Francisco, Los Angeles and San Diego metro areas. They are expected to be in operation in 2022 or 2023. Financial terms of the deal were not disclosed. Tenaska and Capital Dynamics jointly own two solar facilities in the Imperial Valley.