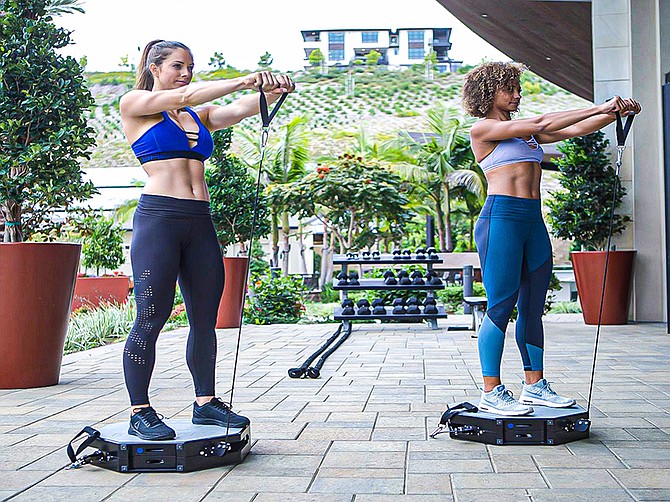 Photo Courtesy of BodyFly Fitness. The BodyFly was developed for both indoor or outdoor use, a 22-inch base, its size allowing for multiple machines to be used within group settings.

BodyFly Fitness, a Mission Valley-based provider of at-home gym equipment, is empowering fitness professionals to make the most out of their workouts with its product called BodyFly.

Founded in 2016, by former NFL athletes and military veterans. The product was developed after three decades of elite physical training experience in the professional and military sectors.

“We want to provide an effective, beneficial full body workout system that isn’t limited by how much space you have or where you are,” said Seyi Ajirotutu co-founder and CEO at BodyFly Fitness. “Our team consists of professional sports trainers, military trainers and health enthusiasts, and we’ve pooled our knowledge to create a product that we hope will change the way people see workout systems.”

The BodyFly is a portable cable machine that can be used anywhere any time, said Kareem Smith, the company’s chief operating officer, adding that the product was designed to replace large and bulky fitness equipment found in gyms into one workout machine.

In particular, the BodyFly was developed for both indoor and outdoor use, a 22-inch base, its size allowing for multiple machines to be used within group settings. Its cables can be used from a 360-degree angle allowing freedom of movement, enabling users to workout from all sides of the machine.

Unlike traditional dumbbells and resistance bands, Bodyfly uses a patented flywheel and gas shock system that provides constant resistance to make your exercises more effective. Users can perform up to 250 unique exercises, ranging from chest, arms, legs, as well as core workouts.

In 2017, the company participated in the San Diego Sports Innovators (SDSI) program. Since graduating, they had inked deals with large hotels, private owned gyms, as well as San Diego school districts.

Bob Rief, SDSI’s executive director said he was very impressed with the founding team’s ability to execute on the initial idea.

“In our Accelerator, we sometimes see the “horse” and sometimes we see “the jockey,” in this instance we saw both the horse and jockey. They have a great product and the resolve to make it all happen which is a pretty rare combination,” said Rief.

Earlier this year, the company joined the San Diego-based Boss Lab, which was launched earlier this year as part of an $11 million commitment to fighting racial injustice and supporting more Black-owned startups.

Prior to BodyFly fitness, Kareem served eight years in the U.S. Navy as an aviation fire fighter and assistant command fitness leader. Ajirotutu is a retired NFL who played for the Los Angeles Chargers, Carolina Panthers, and ended his career with the Philadelphia Eagles to continue working on BodyFly Fitness

To date, the company has raised roughly $900,000 from investors and will be launching a Kickstarter campaign at the end of this year to get the product into the hands of more everyday consumers.

By 2021, Smith said the company expects to sell about 150 units each month and projects to bring in $1.5 million in annual revenues.

Looking ahead, the goal is to expand its product into various cities in Southern California such as Los Angeles and San Francisco.