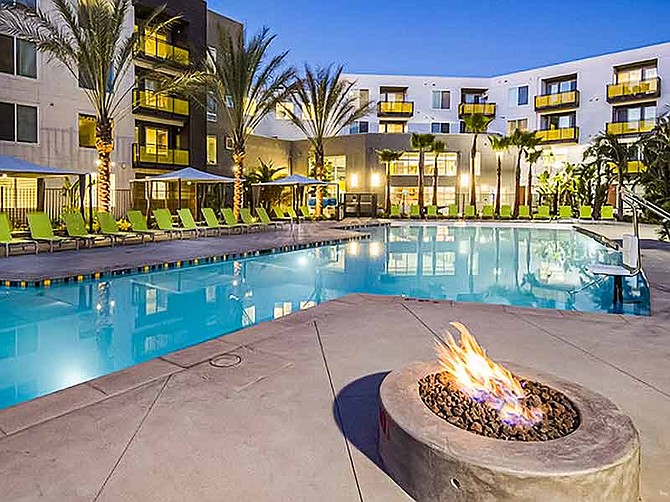 Despite outbreaks of COVID-19 at some college campuses and a switch by some to online classes, student housing is proving to be one of the most resilient markets for commercial real estate, according to Frederick W. Pierce IV.

“It’s definitely a recession resistant investment and one that’s particular good timing now that we’re in a recession,” Pierce said. “To show you our confidence, we’re moving full speed ahead, even during the pandemic.”

Pierce is president and CEO of Pierce Education Properties and an alumnus of San Diego State University.

Pierce said one apartment might have three or four bedrooms with a common kitchen but with their own bathrooms.

For example, he said the student housing property he just bought in Michigan has swimming pools, fitness centers, tanning beds, a business center and a hockey rink.

Pierce said student housing is a safe bet because students or their parents pay the rent on time. When a student signs a lease with his company, Pierce said their parents guarantee payment.

In September, 99% of students who lease space in his buildings paid their rent and in August, 98% paid.

Even if students aren’t going to classes in person, they want to stay in their own apartments rather than go home, Pierce said.

“They don’t want to miss out on the college experience. Most kids were looking forward to it for most of high school,” Pierce said. “College is about so much more than what you learn in a classroom. It’s about educating the whole person. It’s about growing up, making friends.”

Pierce contends that the risk of infection from COVID-19 among those living in student housing is low.

“It’s being transmitted out at the bars,” Pierce said. “Being at college may be one of the safest places they can be.”

Football as a Measure

Pierce’s formula for investing in student housing is to go to schools that have powerhouse football teams. As a result, he said about 90% of his holdings are in the Midwest and the Southeast.

“We go to public universities that play Division One with a minimum of 20,000 undergraduates or 20,000 total students,” Pierce said.

Besides being a football fan, Pierce said he uses football as a measurement because he figures big schools with strong football programs will have an equally strong enrollment.

Student housing is a niche industry which Pierce said has been consolidating since the mid-1990s, which is when he got into it, forming The Pierce Company Inc. in 1995. It became Pierce Education Properties in 2007.