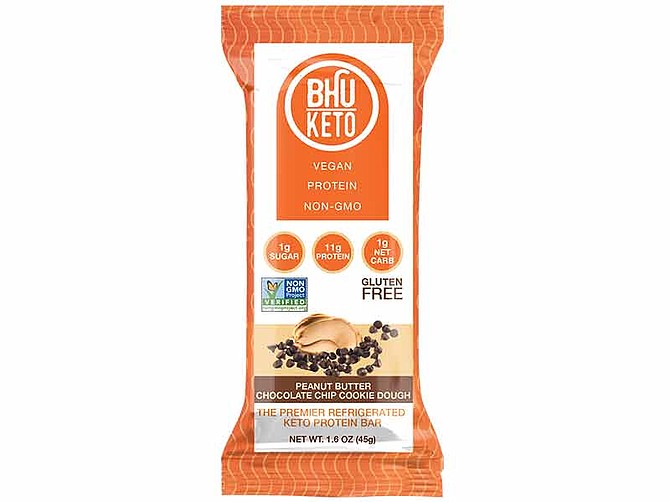 Photo courtesy of Bhu Foods. Bhu Foods’ refrigerated bars are vegan, keto, gluten-free, non-GMO and made with no sugar alcohols, can sugars or artificial ingredients.

As of this month, Bhu Foods will be available in 490 Whole Foods, more than 1,500 Target locations and 900-plus Walmart stores nationwide; its Peanut Butter Chocolate Chip Cookie Dough Keto Bites will be in the former and its refrigerated Keto Protein Bars, available in four flavors, will be in the latter two. Both products are plant-based, gluten-free and non-GMO and made with no sugar alcohols, cane sugars or artificial ingredients.

Bhu Foods, pronounced “boo” and meaning “of the Earth” in Sanskrit, the sacred language of Hinduism, is available in 5,000 locations across the country, said Katleman. In addition to Whole Foods, Target and Walmart, retail partners include Publix, Jimbo’s, Lazy Acres Market, Barons Market, Gelson’s Market, Wegmans and The Vitamin Shoppe, among others. Bhu Foods products are also sold online, on the company website, as well as Amazon.

The line carries protein cookies in two flavors; granola; protein cookie dough in a jar in four flavors; keto bites in four flavors; and keto bars in five flavors. To coincide with the Target launch, Bhu Foods, which sources almost all its ingredients locally, released a Snickerdoodle profile recently that will be available exclusively at the national retailer.

It was her own relationship with food that inspired Katleman to launch Bhu Foods.

Upon graduating from Pomona College in 1980, she launched Laura’s Boston Brownies, a decadent brownies company she ran for 17 years. In 2013, Katleman moved back to San Diego, where she is from, and decided to start Bhu Foods after noticing some of her own self-destructive eating habits.

“I realized I was addicted to sugar and there weren’t a lot of transition foods in the marketplace,” she said, assuming there must be others struggling with the same dependence.

So, she decided to address the problem.

“My motivation was helping people transition from sugary snacks to healthy bars. Our bars are not sweetened, have no sugar alcohols or cane sugar or Stevia, and that is the gap we found in the marketplace. My goal was to provide an organic bar that wasn’t full of artificial flavors.”

Filipe Marafon, director of marketing at Bhu Foods, said the company’s target market is millennial women, although the brand is all inclusive.

“There’s been a change in people’s behaviors across the board, so, it doesn’t matter what generation they are from these days,” he said, adding that since COVID-19, the company has experienced an increase of 60% in online sales. “People are realizing how important it is to be healthier and to eat better. Our target market is mostly women, millennials, but, Bhu Foods is really a good product for anyone.”

It wasn’t until 2018 that Bhu Foods began to scale, said Katleman. That year, because competition is so stiff in the protein bars segment, she decided to create a refrigerated bar to get noticed.

“They trained customers to go looking for fresh bars in the refrigerator segment,” said Katleman. “We certainly help each other on the shelves. People who eat Perfect Snacks would try our bars, too, and vice versa. Without them, I’m not sure I would have made it.”

These days, Bhu Foods has its own brand following and recognition.

Katleman attests that smart business acumen, as well as embracing change and remaining true to the company’s mission, is important.

“People can rely on us to do what we say we are going to do, to honor them and to be of service to them,” she said. “Our values are to break the mold and do something a little different than what’s out there. We want to be at the cutting edge of food, always.”