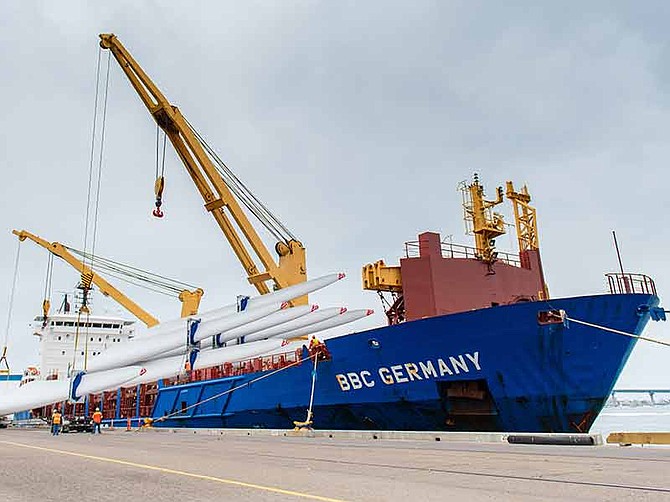 Photo courtesy of Port of San Diego. A work crew unloads massive windmill blades from a ship at the 10th Avenue Marine Terminal. A recently completed $24 million modernization project made operations like this possible.

Clearing the way for a wider variety of bulk and oversize cargo, the Port of San Diego recently completed its $24 million modernization of its 10th Avenue Marine Terminal.

The terminal, south of the Hilton San Diego Bayfront and north of the San Diego-Coronado Bridge, takes up 96 acres. One of its biggest users is Dole Food Co. of Thousand Oaks, which imports containers full of bananas to the western United States there.

Dignitaries marked the completion with a ceremony on Sept. 29.

“The completion of the 10th Avenue Marine Terminal Modernization project is foundational to providing modern, open and flexible space for cargo operations,” said Michael Zucchet, vice chairman of the Board of Port Commissioners. “As the fourth largest port in the state, this project not only improves our cargo handling capacity and creates more jobs, it also bolsters our designation as a Strategic Port in support of our national security efforts.”

With the exception of the Dole shipments, San Diego is generally not a destination for containerized cargo. One recent shipment traveling through the terminal was 45 windmill blades, each measuring 220 feet long. The shipment would not have been possible without the recent terminal upgrades, the port said.

The terminal handles a variety of cargo, including military cargo during times of war. It also handles steel for shipbuilding and dry bulk cargo such as soda ash, aggregate and cement.

More development of the terminal is planned. The port said the timeline for improvements would be determined by market conditions.

There are two commercial freight terminals on San Diego Bay. The second is the National City Marine Terminal, to the south at the foot of Bay Marina Drive. The National City terminal does a large business in importing and exporting vehicles.

The Port of San Diego handled 5.33 million tons of cargo during 2019, down slightly from 5.39 tons in 2018, according to the Pacific Maritime Association. Autos and trucks comprised 68.9% of the tonnage while containerized goods made up 24.2% of the tonnage. Some 3.8% of the tonnage was bulk cargo, while 3.1% was general cargo.

The port of San Diego handled 76,000 containers in 2019, compared to 11.8 million in the ports of Los Angeles and Long Beach combined, according to the association.

The port said it has been attracting new business. In 2019, Mexican sugar producer Zucarmex agreed to a long-term contract.

In other news, the port announced on Oct. 12 that it updated its master plan to include a new concept for trucks serving the marine terminals — a concept that includes dedicated truck lanes. The port estimates the cost of upgrading Harbor Drive will be between $21 million and $32 million.

The plan is meant to reduce greenhouse gas emissions and steer traffic away from Barrio Logan, a neighborhood that combines industries and residences. The concept, called Harbor Drive 2.0, includes a designated “haul road” and intelligent transportation systems to separate truck traffic from regular traffic.

Port commissioners approved a framework memorandum of understanding with two transportation agencies, Caltrans and SANDAG, at their meeting on Oct. 9.

One proposed improvement would let trucks “jump the queue” at several intersections along Harbor Drive to bypass other vehicles and keep them on the designated truck route outside Barrio Logan. According to the port district, this would reduce idling and separate trucks from other vehicle traffic.