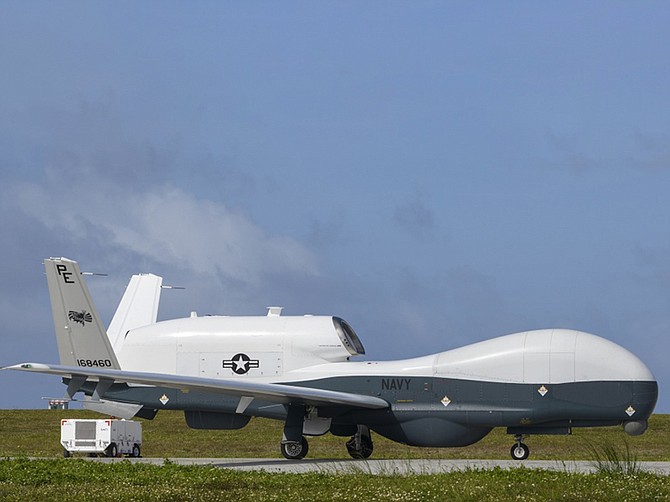 Photo courtesy of U.S. Navy. A U.S. Navy Triton unmanned aircraft taxis at Andersen Air Force Base in Guam in an image from April. Builder Northrop Grumman says it may have to temporarily close the Triton production line if the 2021 Pentagon budget proposal is not amended.

Northrop Grumman Corp. (NYSE: NOC) lifted the curtain on its high-altitude Triton unmanned aircraft program recently and offered a glimpse into several worlds: the world of its U.S. Navy customer, the world of Capitol Hill budget negotiations, and the world of military-to-military relationships.

The business, which engineers Triton and other unmanned aircraft in Rancho Bernardo, offered an update on the Triton program Sept. 29.

The good news is that its Navy customer finds the Triton useful. “Invaluable” was the word that the Navy’s 7th Fleet used when discussing the aircraft this spring. The unmanned Triton will eventually be a substitute for the EP-3 Aries, a manned intelligence aircraft similar to the 1960s-era P-3 Orion.

With its specialized sensor suite, Triton is able to patrol large expanses of ocean, gathering intelligence and situational awareness. The aircraft flies at altitudes greater than 50,000 feet (9.5 miles) and has a range of more than 2,000 nautical miles.

The Navy has two Tritons based in Guam, in the western Pacific Ocean, roughly 1,000 miles away from Asia. Having the aircraft in Guam “creates a complex problem set for our adversaries,” the commanding officer of the Navy’s Triton squadron said in May.

Northrop Grumman also said that it may experience production difficulties since the latest Pentagon budget request does not have any money for the Triton program in 2021 and 2022. The business said that it may have to temporarily close the production line for the aircraft, harming suppliers and potentially driving up costs for subsequent Triton aircraft. Northrop Grumman’s factory is in Palmdale.

The Defense Department budget for 2021 is not finalized, even though the fiscal year began on Oct. 1.

“We estimate that stopping and restarting the [production] line alone will cost roughly $150 million and then each aircraft likely costs about $20 million more,” said Shaffer. “Consequently, we are talking to Congress and our Navy customer about opportunities to sustain the production line, protect our suppliers and support the program long-term.”

One option for keeping the line open, the corporation said, would be if Australia orders additional aircraft. Northrop Grumman said that matter is between the U.S. Navy and the Australian government, though the corporation stood ready to help if asked. Australia recently signed a contract for three Triton aircraft. It ultimately plans to buy six, possibly seven, aircraft. Technically, the sale is routed through the U.S. Navy.