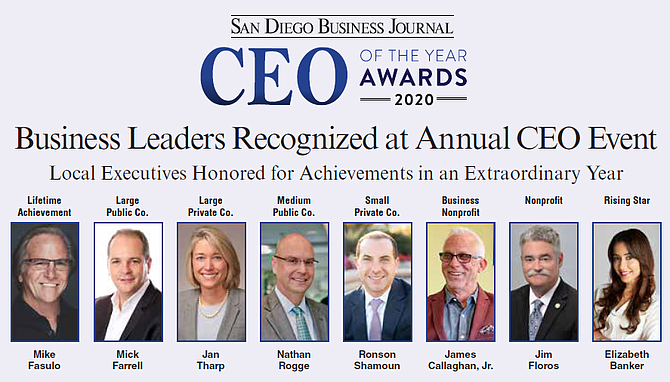 San Diego business leaders were recognized on Wednesday, Sept. 30 at the 12th Annual San Diego Business Journal CEO of the Year Awards, held this year for the first time in a virtual format.

Traditionally the event is an opportunity to recognize local executive leaders' achievements within their companies, their industries, and in the San Diego community. It is a chance to showcase the best and the brightest who exemplify the spirit of San Diego.

Because of the pandemic, the event was held virtually with more than 400 tuning in to watch the hour-long event.

With over 200 nominations, all representing a wide variety of industries, from biotech, to real estate, to education. The San Diego Business Journal Executive Team had the difficult task of narrowing down the nominations to 100 finalists.

Tide Rock Holdings was the gold sponsor of the event.

First up was the 2020 Lifetime Achievement Award.

Receiving the honor was Mike Fasulo, president and COO of Sony Electronics. Appointed to his current position in 2014, Fasulo has been with Sony for 36 years. He oversees Sony Electronics’ multi-billion dollar business in North America and successfully executed a comprehensive turnaround. A staunch supporter and advocate for elevating diversity and inclusion to the highest levels of thought, dialogue and real action, he helped drive the company’s tangible efforts to serve the community and region during the COVID-19 pandemic and ongoing social justice movement.

Also congratulating him by video from Japan was Sony Corporation President and CEO Kenichiro “Ken” Yoshida who commended his dedication to helping others. NBA Hall of Famer Bill Walton who has worked with Fasulo volunteering with the Boys and Girls Club also congratulated Fasulo.

Awards were given in seven categories. The first being Rising Star. This honor went to Elizabeth Banker of Shore Solutions, Inc.

Banker became a first time CEO at 29 when she bought the business and led the company to its first profitable year in 2016, while also giving birth to her first child on her own 30th birthday. In 21017 she led her company to record revenues, employee count and profitability, despite a crisis where access to the company’s main sales channel was lost for nearly five months due to third party technical issues. A veteran, Baker has been an inspiration to many facing challenges throughout her life and has conquered them with determination, passion, and an eagerness to succeed.

The honoree in the Nonprofit category was Jim Floros, of the Jacobs and Cushman San Diego Foodbank. The Food Bank and its North County chapter comprise the largest hunger relief organization in San Diego County. During the COVID-19 Crisis, Floros was quick to mobilize and engage the food bank to address the immediate need.

In the first two weeks of the emergency, the food banks conducted 175 food distributions and gave away nearly 600,000 more pounds of nutritious food to seniors, working poor families, low income military families, children, the recently laid off and furloughed, and those who had never faced food insecurity before

During 2019, Callaghan led the way to increase his organization’s capacity to serve a total of 1,200 more clients per year, increasing funding by approximately $19 million which included the addition of 145 staff. All while managing $60 million in funding to serve 10,000 clients with 570 staff in San Diego County alone.

Honored in the Small Private Company category was Ronson Shamoun of RJS Law. Shamoun is the founder and CEO of RJS Law, where he has led the tax law firm for 17 years. The company has offices in San Diego, Orange County, and Beverly Hills.

He is known for holding himself to the highest level of integrity and expects everyone in the office to do the same.

Involved in the community, Shamoun is an ardent contributor and supporter for various organizations. Every year he donates and pays any costs associated with billboard campaigns for the Girl Scouts of San Diego and Susan G. Komen Race for the Cure. He also hosts the Big Give Bash at his firm which benefits the USD School of Law.

In the first 18 months of her tenure, she successfully steered the organization through legacy-based challenges, including class action lawsuits, criminal indictments, bankruptcy and a subsequent company sale. The most impressive aspect of these achievements is that in the midst of this period, she was able to develop a transformational corporate strategy with a focus on growth and innovation. She re-established Bumble Bee’s North Star foundation of purpose and vision and redefined the company’s values and guidelines.

Honored as the CEO of the Year in the Medium Public Company category was Nathan Rogge of the Bank of Southern California.

Rogge has been a major factor in the growth and success of Bank of Southern California since taking the role of president and CEO 12 years ago. His expert guidance has led to several major mergers and acquisitions, a complete re-branding of the bank, and the development of an award-winning workplace and culture.

2019 and early 2020 were especially important with the acquisition of CalWest Bank intended to fuel the bank’s growth in the region. To facilitate this acquisition and future growth in 2020, Rogge oversaw a $12 million capital raise though the issuance of common stock. The proceeds were used to help strengthen the banks’ balance sheet. At the completion of the acquisition the organization will have approximately $1.1 billion in assets with capital of approximately $120 million.

The final CEO of the Year Award was in the Large Public Company category. Mick Farrell of ResMed was the honoree.

Farrell has not only overseen ResMed’s transformation from a medical device leader to a global pioneer and leader in digital health, he and his team’s collective mission is to help the 936 million people who suffer every night from the effects of sleep apnea, and the 400 million people with COPD, live higher-quality happier lives with the help of ResMed’s medical device and digital health technologies

Plus ResMed powered through the pandemic with four straight quarters of double-digit revenue and earnings gains, topping consensus estimates every quarter.

Since Farrell became CEO five years ago, revenue has doubled to $3 billion and ResMed’s stock is up roughly 300%. That far outpaces the S&P 500’s 116% rise in that time.

He leads a global company agile enough to shift during a global pandemic and help give hundreds of thousands of people a fighting chance against COVID-19, all while keeping 7,500 employees safe and working in San Diego and around the world.