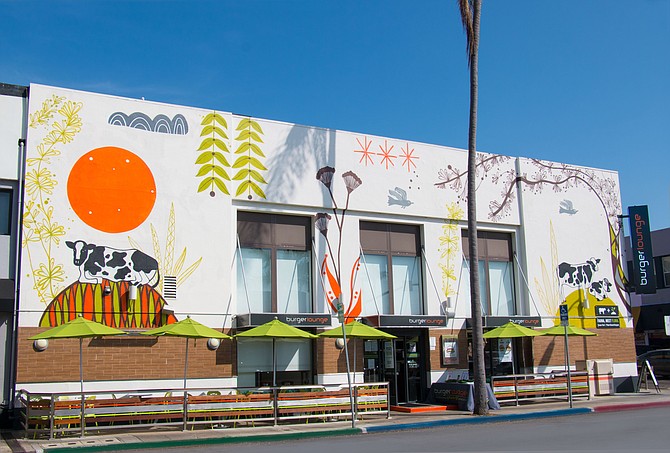 Photo Courtesy of California Restaurant Association. Bleu Boheme, a French restaurant in Kensington, is among the more than 300 restaurants participating in Dine Diego.

Burger Lounge LLC, the Little Italy-based burger chain with over $40 million in revenue in 2019, wants a piece of the meatless pie.

The company, founded in 2007 and with 350 employees, has converted its Hillcrest location into a plant-based test kitchen. The Real Food Innovation Test Kitchen will trial a number of plant-based burger combinations, according to J. Dean Loring, president and CEO, to debut in mid-November across all stores.

“When we began 13 years ago, we made a commitment to source the highest quality grass-fed beef possible,” Loring said. “We are putting the same emphasis on sourcing our new plant-based menu, of course with taste and flavor at the forefront.”

The goal of the revised menu, dubbed the Fauna and Flora menu, is to meet the growing demand for plant-based meat alternatives, said Robert Lane. The vice president of marketing of Burger Lounge said he hopes to meet the needs of flexitarians, vegetarians and vegans while simultaneously catering to the company’s meat-eating customer base.

“The menu today will cater very well to the meat eater and the plant eater,” he said. “This is not a pivot away from responsibly-sourced meat, which is what we built our brand on. This is an addition to address the social demand for plant-based products, done with the same responsibility to sourcing we’ve always had at Burger Lounge.”

The conversation to launch a plant-based test kitchen came about in 2019, according to Jason Grooms, vice president of operations services. The company, with 23 locations in California and Las Vegas, didn’t open any stores last year. Instead, it focused closely on identifying what the next step in the evolution of Burger Lounge would be.

In the early part of 2019, the burger chain begun offering some vegan products as part of its existing lineup, said Grooms, including a vegan bun and a vegan house Thousand Island dressing. Around April this year, the company made the decision to open its first test kitchen and officially add plant-based options to Burger Lounge’s bill of fare.

“We didn’t wait till things turned around” from COVID-19, he said. “We knew it was the direction we wanted to go in, we just needed to do it right. So, we used hibernating restaurants to get ready for it. We knew, COVID or not, that it was something we wanted to do.”

In response to COVID-19, Burger Lounge removed salad items from its menu. The reason, Lane said, was because they took up 50% of the company’s physical inventory but made up a very small amount of revenue. These were replaced by the Lounge Box, a take-home, uncooked burger kit for four, and Burger Lounge Essentials, through which the company sold goods like cheese, bread and even cleaning supplies to both guests and employees.

“We wanted to come out guns blazing, with new energy and a new menu that was remodeled with a reinvigorated brand,” said Lane. “Guests will make new choices in the coming year. Some restaurants will no longer exist. We wanted to make some noise when things appear to get back to normal, so we can show the world we were not just sitting back on our heels.”

For Grooms, it was important for the company to be thoughtful and duteous about these company-wide changes.

“We saw a lot of brands and concepts that were just putting plant-based patties on the menu items it already had,” he said. “We wanted to put our culinary engine behind it to be as good as the other burgers we create. We knew that if we came out with some off-the-shelf product or something that wasn’t to our level of rigor and didn’t have our special touch, our customers just wouldn’t accept it.”

Cashew-based milkshakes will also be available in strawberry and vanilla.

Lane said he hopes the menu revision will produce a significant boost for the company that will result in the opening of new locations as well as the hiring of new staff members. A second test kitchen is scheduled to open in Del Mar before the end of the year, he said.

“It’s the core value of Burger Lounge since day one to provide food that values the body and the planet,” said Lane. “This menu is an extension of that.”