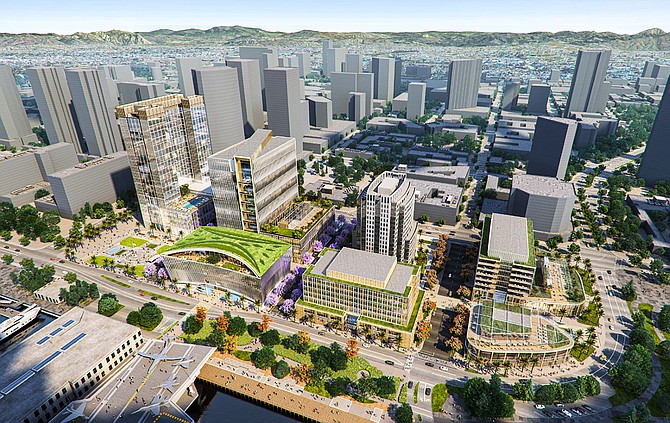 A more than eight-acre chunk of the downtown San Diego waterfront property that had been part of the Manchester Pacific Gateway project will instead become a life science campus with an estimated price tag of about $1.5 billion.

The real estate investment firm IQHQ based in Solana Beach has acquired most of the Manchester Pacific Gateway site with plans to build what it calls the San Diego Research and Development District, dubbed RaDD.

The rest of the site will be retained by the Manchester Financial Group for construction of a hotel and plaza.

IQHQ declined to disclose what it paid for the property.

Covering five city blocks, the district will include a 17-story tower, several labs, up to five office buildings, and a museum.

In a statement, Mayor Kevin Faulconer said the IQHQ project “will transform our waterfront and bring top tier science companies to downtown.”

The exact makeup of the life science district and the price tag of the development is “a bit of a moving target,” Bonanno said.

In all, the project will have up to 1.3 million square feet of space.

“The idea of it is we do office and lab space in a major scale that’s in a transportation rich location,” Bonanno said. “This is a very beautiful sort of resort-like area on the North Embarcadero of San Diego Bay.”

With a groundbreaking in early October, plans are to complete the first phase of the project by summer 2023 – about a year after Stockdale Capital Partners will finish developing Horton Plaza as an office, life science and retail campus.

To date, life science firms have clustered around the University of California San Diego and the surrounding neighborhoods of UTC, Sorrento Valley and Sorrento Mesa to some extent.

Bonanno said downtown is ripe for life science companies and presents a far different opportunity than those suburban locations.

“Being in an urban environment like this is conforming to the direction life science is going, being able to live, work and play in the same location,” Bonanno said. “It’s just a different kind of work experience.”

The COVID-19 pandemic may have slowed the trend – a “little bit of a setback,” Bonanno said. “We don’t think that will last.”

On top of the overall urban environment, Bonanno said the science district will offer views that can’t be matched.

“You’ve got these view corridors which the project is built around,” Bonanno said. “Those views change at night but they don’t get worse.”

RaDD will be IQHQ’s first project in San Diego.

The company also has projects in San Francisco, Boston and Andover, MA, according to its website.

“The Research and Development District is exciting on so many levels – not only does it represent our first acquisition in the San Diego region, which IQHQ is proud to call home, we also have an opportunity to create the first truly urban waterfront campus dedicated to the advancement of life sciences,” Tracy Murphy, IQHQ president, said in a statement.

“Once complete, the RaDD will be a premier development that will spark and define the region’s commercial life science market in San Diego similar to that of the Seaport District in Boston,” Murphy said.