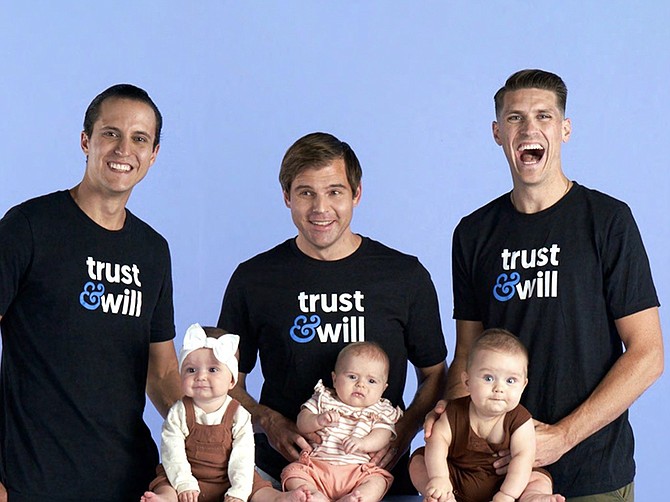 San Diego-based Trust & Will, which aims to become the Turbo Tax of estate planning, has raised a $15 million Series B round of funding.

The latest capital infusion comes at a time when the company has seen significant adoption on its platform, tripling its member base to roughly 160,000 customers.

To date Trust & Will has raised more than $23 million in venture capital funding, most recently closing its $6 million Series A back in December 2019.

Returning backers Revolution’s Rise of the Rest Seed Fund, Link Ventures, Halogen Ventures, Western Technology Investment and Techstars Ventures (among others) also participated in the round.

The company plans to use its new funds to aggressively expand its sales and marketing efforts as well as broaden and accelerate its product development, said Cody Barbo chief executive at Trust & Will.

Founded in 2017, Trust & Will is modernizing the trust and estate planning industry with an easy, fast, and secure way to set up your estate plan online.

Barbo, who is 30, co-founded the company with Daniel Goldstein and Brian Lamb. He says the idea for the company arose at a time in which he and other team members were starting to get married, have kids and also begin thinking about whether they had a will or a trust.

Fast forward, since launching its first product in 2018, Trust & Will has secured strategic partnerships with several institutions including Fifth Third Bank, AARP, Mint.com, Acorns, Haven Life Insurance and Girl Scouts of the USA.

Estate planning is a $22 billion annual industry with about half of all adults in the U.S. having no will at all, said Barbo. This includes an estimated 45 million parents with minor children.

Its customers span a range of demographics, but its two sweet spots are 30 to 55 year olds who are married with minor children, homeowners and first time estate planning makers or assisting an elderly family member with their own estate plan.

“Estate planning is the single most impactful thing you can do to protect your loved ones from the unexpected. But for most families it’s become little more than an afterthought,” he added.

While Trust & Will’s self-service option is designed for young families with less than $1 million in assets, the company also has begun offering support for customers with more complex estate planning needs.

In addition, customers can pay a one-time fee or an annual subscription to have their documents hosted on Trust & Will’s Internet cloud.

Trust & Will’s products aren’t the only ones out there.

Other companies, such as LegalZoom, also offer estate-planning services for those looking to get documents quickly and don’t want to pay an estate-planning attorney. Trust & Will claims its service is easier to use than its competitors’.

Earlier this year, the company also began offering its platform at no cost to financial advisors, so far more than 1,000 have signed up.

Barbo is the former founder and CEO of Industry, a career-oriented, LinkedIn-like platform for hospitality workers and employers. Lamb and Goldstein previously worked in product design, custom software development and marketing for agencies.

Headquartered in Little Italy, it employs roughly 24 local staffers. The company plans to double its headcount over the next year.

“Our vision is to be the household name for modern estate planning,” said Barbo. “Over the years to come we will continue building out our platform for tens of millions of families to create and manage their estate plan online, and eventually to facilitate an end-to-end digital transfer of wealth.”