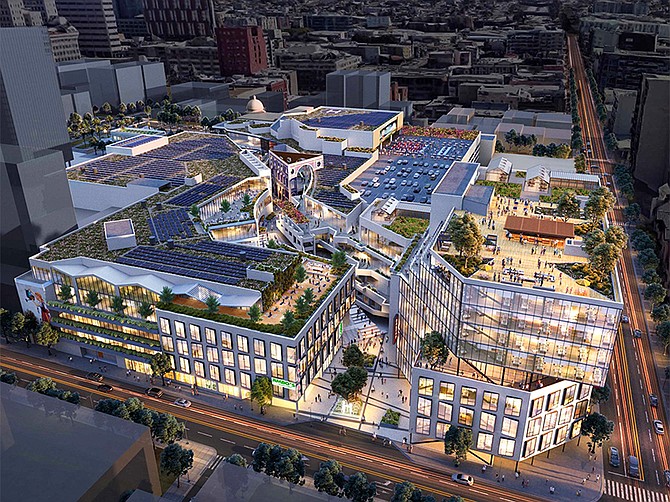 Downtown San Diego is expected to rebound strongly from any troubles caused by the COVID-19 pandemic, according to many experts.

Retailers have been hard hit by the pandemic, especially restaurants, and the office market is also hurting but multi-family projects continue to chug along with two prominent sales since the beginning of the pandemic.

Coupled with the $275 million redevelopment of Horton Plaza into a mix of life science office space and retail, the IQHQ San Diego Research and Development District (RaDD) is expected to bring a surge of activity, providing a long-awaited downtown employment hub.

“The investors I’ve talked with in the last three months in particular have been very bullish on downtown,” said Betsy Brennan, president and CEO of the Downtown San Diego Partnership. “San Diego is resilient.”

David Malmuth, a downtown developer and lecturer at the University of California San Diego, said IQHQ’s project makes this “a dynamic moment” for downtown.

“It offers great possibility,” Malmuth said. “A couple of years ago, there was not a lot of confidence that those kinds of businesses want to be downtown. With the investment IQHQ is doing, that changes that.”

IQHQ based in Solana Beach in September acquired most of the Manchester Pacific Gateway site along the bay front.

John Bonanno, chief investment officer of IQHQ, said that despite the COVID-19 pandemic, “You’re starting to see a renaissance down there (downtown) that I would see continuing.”

“What we saw with the acquisition of the Manchester project land was really a unique piece of land in what we see as really the right place to kick that off,” Bonanno said. “We’re not the only people. We know that all of our competitors have looked down there, have considered going down there.”

Vacancy in the general office market has reached 20% to 30% downtown, Brennan said, but she said bright spots for the downtown office market include Kilroy Realty’s ongoing construction of a 219,000 square-foot office campus at 2100 Kettner Blvd. and redevelopment of the former San Diego County courthouse into a mixed use project by Holland Partner Group of Vancouver, WA

Called Courthouse Commons, the 37-story project at 220 W. Broadway by Holland is estimated to cost $400 million and would include 270,493 square feet of office space, 18,595 square feet of commercial space, and 431 apartments.

The courthouse project could make that section of downtown “into a much more walkable area of downtown and it’s right near the bay,” Brennan said. “This could be really nice for connectivity between the waterfront and downtown, which is something we always wanted.

“Downtown’s office future is heavily reliant on its ability to attract new companies because it’s new companies that will create the growth in the downtown office market,” said Gary London, an economist and real estate advisor. “The existing companies mostly will compress to one extent or another, are going to develop hybrid solutions to how people work – some working at home, some working in the office.”

That said, London is optimistic about the downtown office market looking beyond the pandemic.

“The downtown office future will be quite bright because there’s potential for a bunch of new companies downtown, particularly with the right size high-tech,” London said. “That’s going to be tamped down a little bit by a compression in demand of existing companies. As their leases come up, they’re going to renegotiate for smaller amounts of office space. But I’m pretty confident about it (downtown).”

“Downtown will recover, but it will take time. Biotech could be a significant new player, but it will probably require a major pharmaceutical firm to enter or increase its presence in the San Diego region in a substantial way,” Reaser said. “Downtown must compete with Torrey Pines, UTC, and Sorrento Mesa/Valley for life sciences tenants.”

Derek Hulse, managing director of Cushman & Wakefield in San Diego, said that “2021 will be a slow recovery and return to the office for many companies, but we should see a significant increase in activity the latter part of 2021 and in the years to come.”

“While there may be some short term pain with excess inventory and low tenant demand, the future of the submarket is very promising,” Hulse said. “Long term, downtown San Diego is a vibrant and evolving submarket with immediate access to an international airport, public transportation connecting the downtown submarket to Torrey Pines, UTC and two major universities (UC San Diego and San Diego State University).”

On the retail side, downtown is hurting, said Bill Shrader president and founder of Urban Property Group, a commercial real estate brokerage.

“I’m crossing my fingers that we have a Comic-Con next year. I think everybody is. That would be huge,” Shrader said.

Meanwhile, Shrader said more than 25 restaurants have closed downtown because of the pandemic.

“Traffic is down. The convention center is down. The hotel occupancy is very low. That’s just trickling through to the retail tenants as well. What’s hurting them also is the office buildings aren’t fully occupied,” Shrader said

Yet Shrader said his firm has seen a lot of activity.

Rents are down, and that gives people a chance to move into a better location that they may not have been able to afford before, Shrader said.

“The deals that we are doing is people who are improving their location,’ Shrader said.

While general office and retail is struggling downtown, the apartment market is one of the stronger players in commercial real estate downtown.

The market is softer than it was prior to the pandemic, but Brennan and Rachel Parsons, a director of the commercial real estate brokerage Moran & Company said the downtown apartment is doing better than some might think.

Downtown “is probably the most active as far as investment sale locations in all of San Diego County this year,” Parsons said.

Traffic is down, “but the overall economics of downtown San Diego is still pretty solid,” Parsons said. “There’s a lot of capital invested in downtown, which kind of creates a really positive vision looking forward.”

Among significant deals cited by Parsons were the September sale of the 129-unit AV8 apartments in Little Italy for $70.1 million and the October sale of the 143-apartment Valentina at 1919 Pacific Highway for $110 million.

Tyler Sinks, director of multifamily sales for Berkadia’s San Diego office, said that the Valentina sale was remarkable because it set a new record for the per unit price at more $710,000.

“This COVID blip is literally a blip in the 10 or 15-year picture in what downtown is going to look like,” Sinks said. “I would definitely continue to bank on downtown.”

On the downside, many apartment landlords are offering concessions in the form of free rent. Typically, landlords offer free rent for a limited time when a building first opens, but the concessions of late have been for longer periods – two months instead of one.

Still, the base rents have remained steady and Parsons said that “occupancies have maintained well.”

Brennan said that while there has been some movement to the suburbs and more rural areas from some people who want more room as a result of the pandemic, she said “There’s just as many people who want to live in an area that’s great for transit, that is easy to get out to the bay and the beaches.”

Similar, Brent Schertzer of the Holland Partner Group said “We’ve been pretty surprised. Everyone was saying there was going to be this big exodus from downtown.

“We, at least with this project (The Merian) haven’t been seeing that.” Schertzer said.

Brennan said she expects that the city’s tourism industry – a key element to the downtown economy - will be back to where it was pre-pandemic within 24 months.

“Now that there is supposedly some vaccines that seem to be safe and effective, as they roll out those maybe in a year or two years from now, I think we’ll see a really nice recovery for downtown, our downtown and all downtowns,” Brennan said.