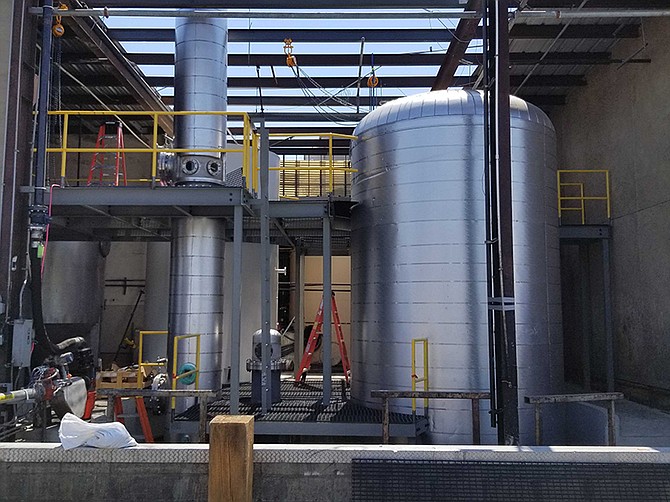 But because of COVID-19, which has drastically impacted the hospitality industry – from which New Leaf sources most of its inventory – the company took a hit earlier this year.

Thankfully, Jennifer Case, founder and CEO, implemented a pivot plan that is not only helping the company recover from the slump, but also exponentially growing the business.

Case halted all oil collecting and converted the company’s 35 staff members to assistant contractors to keep them employed. Those employees are currently working on an $8 million, partially-state-funded expansion of the company’s Barrio Logan facility, which will take it from a 5-million-gallon production to 12 million before the end of the year.

The company also strategically shifted a bulk of its focus to its biodiesel and feedstock trading and transloading secondary business, she said. This basically means New Leaf buys biodiesel fuel from other operators and sells it forward for a profit. The margins are still the same, said Case, the only difference is New Leaf doesn’t make the fuel itself.

“Restaurants got hit really hard and the oil stopped coming in the spring – business went down to 25% of normal business for that time of year. It was the lowest it’s been since I’ve been in business, even worse than 2008 (during the Great Recession),” said Case, who grew up in Los Angeles. The mother of one studied political science at the University of California San Diego and got her law degree from Pepperdine University.

“We took a hard look at our company to figure out what it was we needed to do to survive. We either kept producing fuel and sold it at a loss, just to keep employees and lose money in the process. Or turn them into assistant contractors for the expansion and wait till the oil market comes back. That (the latter) is what we did.”

But that only solved part of the problem, said Case.

The plant is closed and undergoing the enlargement. But although the facility is shut down, New Leaf still had customer orders to fill. So, it turned to its trading category to fulfill those purchases with fuel obtained from other companies.

This vertical is doing extremely well, said Case, and is what has kept the company afloat during these uncertain times.

Joe Gershen, director of sales and marketing, is who launched the trading business for New Leaf Biofuel four years ago. With people being home during the lockdown and placing more orders online, the need for biodiesel fuel (mostly for delivery trucks like those used by Amazon) is at an all-time high, he said.

“While other segments of the fuel business were pretty hard hit by the pandemic, the one thing that seemed to sustain well was the heavy-duty diesel sector,” he said. “People are working from home and still getting deliveries, most of which is delivered on trucks and rail, all of which use diesel fuel.”

The way the trading business works is New Leaf purchases biodiesel fuel from other producers, mostly from states in the Midwest, including Missouri, Oklahoma, Iowa and Kansas. The fuel then makes its way down to Southern California through a rail operation in Fontana, in San Bernardino County, said Gershen. That shipment is then picked up by New Leaf’s fleet of 10 trucks and taken back to the plant.

Because this sector is growing so rapidly, Case recently put in for a grant from the United States Department of Agriculture (USDA) in order to build 2 million gallons worth of storage tanks in the Fontana rail facility. If it gets funded, it will have a huge impact on the continued growth of the company, she said; New Leaf could buy more fuel at the best market price, store it in the lockers and sell it when the prices are at their highest, as opposed to selling the product first and then going off to find a seller.

Even if the grant isn’t awarded, Case said she will go out and raise money for it, the same way she raised money to launch New Leaf in the first place; the company was funded using money from grants, a loan from the City of San Diego and a friends and family round.

“It is really nice to be recognized,” she said, “especially in the industry I chose to play in, which is a male-dominated field. It’s really nice when you are recognized not only for building a cool company but doing so as a female.”