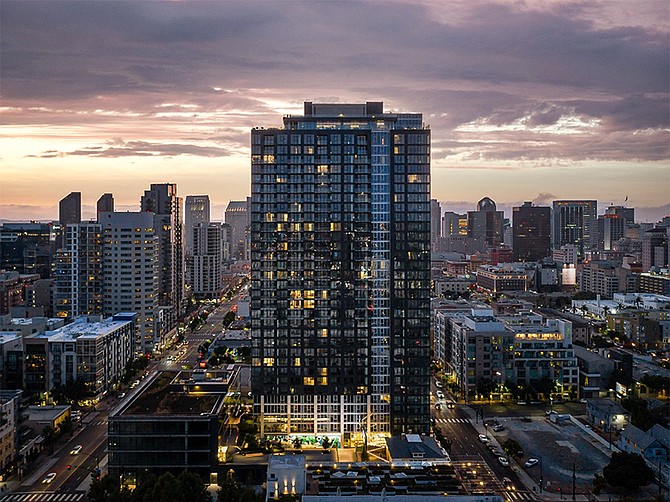 A $285 million East Village apartment tower completed in August by the Holland Partner Group is seen by many as a sign of downtown San Diego’s resilience.

As of mid-November, leasing was strong despite the COVID-19 pandemic, said Brent Schertzer, managing director of Holland Partner Group.

At 34 stories and more than 500,000 square feet, The Merian has 426 apartments, 85 of which have been designated for low-income residents.

“We’ve had really good activity,” Schertzer said. “If we weren’t in the middle of COVID, I think it would be stronger.”

Nearly a third of the market-rate apartments and nearly half of the low-income apartments have been leased, Schertzer said.

“Some of the larger units, like the two-bedroom units, have been really leasing well. That’s probably people wanting more space working from home,” Schertzer said.

“From what we’ve seen, there’s still a huge demand for housing and rental housing,” Schertzer said. “There’s been a bit more competition in terms of attracting tenants in the market, but from what we’re seeing, there is really strong interest of people wanting to locate downtown.”

Like many other apartment complexes, The Meriam is offering concessions to attract tenants – up to eight weeks free rent, according to its website.

Typically, prior to the pandemic, developers often offered up to a month free rent on a new project when it opened.

“You have seen some higher concessions this year than in the past,” said Rachel Parsons, a director at the commercial real estate brokerage Moran & Company.

Although The Merian was designed and was well under way when the pandemic hit in March, Schertzer said that “unknowingly, the project was really designed well for COVID given the outdoor space within the project.”

The plaza has a large outdoor video screen and a stage.

Tyler Sinks, director of multi-family sales for Berkadia’s San Diego office, said The Merian was one of downtown’s standout projects.

Carrier Johnson was the architect on The Merian with interior designs by Vida Design.

The Merian shares the block at Park Boulevard and Market Street with a historic home that’s been incorporated into The Merian and a 67,000 square-foot building that the Holland Partner Group built as the downtown campus for the University of California San Diego.

Exterior work has been completed on the UC San Diego building but the university will make tenant improvements on the interior, Schertzer said.

Originally known by its address as Park + Market, Holland Partner Group changed the name of its project to The Merian as a way of noting the project’s connection to art and science programs that UC San Diego offers and its reputation as a research institution.

“We were actually pretty inspired by having UCSD as a neighbor next to the residential building,” Shertzer said.

Maria Merian, for whom the apartment tower has been named, was a German-born naturalist and scientific illustrator.

Her work was used as the inspiration of several of the many artworks in the complex that bears her name.

“That fit in with this idea of the intersection of art and science,” Schertzer said.

San Diego artists Ron Miriello and Sean Kelly did the art in the project.

As part of the overall project, Holland Partners Group renovated the exterior of the historic two-story Remmen Building that was built on the site in 1907. The building was reoriented on the site toward Park Boulevard.

“That gave us the ability to open up the courtyard to the public,” Schertzer said. “Right now, we’re looking for tenants to lease that as a restaurant, café or bar of some sort.”