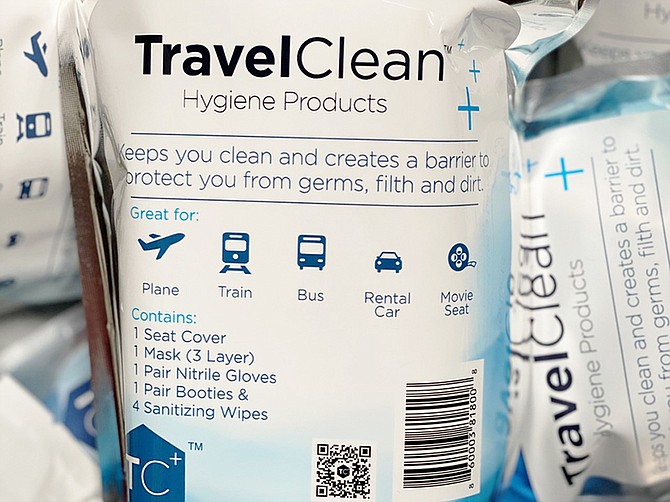 Photo courtesy of TravelClean. TravelClean sells disposable and hygienic personal travel kits, that include a seat cover, booties and gloves in a recyclable pouch.

COVID-19 has changed travel as we know it; from armrests to airplane bathrooms, travelers are more aware of the potential germs around them while on an aircraft.

TravelClean, a Carlsbad-based company that sells disposable and hygienic personal travel kits, is hoping to answer the call.

Retailing at $17.99 each, the pouches include a three-layer, non-surgical face mask; a pair of non-woven fabric booties; a non-woven fabric seat cover; four alcohol-based wipes; and one pair of nitrile gloves. The goal is to keep travelers safe and healthy in this hypersensitive climate and beyond, said Managing Partner Nicholas Esayian.

Since relaunching May of this year – the Carlsbad-based company was originally founded in 2014 – TravelClean has sold $500,000-worth of the recyclable kits. At this pace, Esayian projects the company will reach north of $2 million in revenue by the end of FY2020.

“I was a professional sports car driver from 1992 to 2019 and traveled a lot for racing. I’m not a complete germaphobe, but I do have issues with cleanliness in public spaces,” said Esayian, who also founded San Diego-based Light Helmets, a sports helmet manufacturer. “I was flying back from the Sema Show (automotive trade event) in Las Vegas one year, and I thought to myself, ‘my God, this seat is no different than sleeping on a hotel mattress with no sheets’. And that’s when the idea for TravelClean popped into my head.”

The company was founded in 2014, although it has functioned in the background as a low value business since then, said Esayian. In 2017, he launched Light Helmets and shifted most of his efforts to that.

But in February, just as COVID-19 began to make its way to the United States, Esayian said he got a call from a local television producer advising him to rethink the concept. A few weeks later, he said he edited the original infomercial he shot years prior and tested it on a local network. Based on the response, he knew that he could not only entice consumers, but also corporations and industries that rely on tourism.

So far, Esayian said the reception has been as he hoped.

Since launching in May, he’s sold $500,000 worth of kits, or roughly 30,000 to 35,000 individual packages. Esayian expects to sell $600,000 worth of TravelClean products, which are available on Amazon and on the TravelClean website, by the end of the year.

Miryam Wahrman, a microbiologist and author of “The Hand Book: Surviving a Germ-Filled World,” said a quick DIY cleaning routine could reduce one’s exposure to germs. She cautions travelers to be aware of the back of their heads and to place a barrier between them and airplane seats.

A seat cover, like the one in the TravelClean kit, sounds like it could do the trick.

So far, the hardest part of running the business was keeping up with the initial demand, said Esayian. He said he pivoted operations at the Light Helmets headquarters the first few weeks to pick, pack and ship from there. Since, he’s partnered with ShipMonk, a Pennsylvania-based fulfillment company, and Shopify, a Canadian e-commerce company.

All product comes from China, said Esayian, although he is looking to source from Mexico soon for operations-related reasons. Marketing mostly takes place via Facebook and Instagram. The company is currently looking into the influencer market for potential partnerships, he said.

So far, two National Football League (NFL) teams have purchased TravelClean kits, as well as a couple of banks and a handful of professional sports players. Esayian said he and his team of five have also had promising conversations with the Golden Globe awards, which are contemplating gifting TravelClean kits next year. Esayian has also had meetings with a number of airlines, including United Airlines and Southwest Airlines.