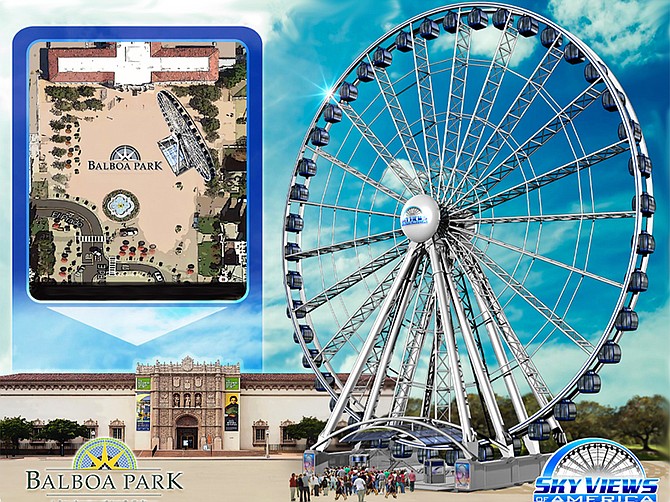 Cohn Restaurant Group, Inc. (CRG) is vying for the 148-foot-tall rotable wheel to be temporarily housed at Balboa Park’s Plaza de Panama. CRG is a hospitality firm founded in 1981 which owns and operates 25 restaurants in Southern California and Maui, Hawaii.

The wheel is owned and operated by Sky Views of America, a Phoenix, Arizona, based company. Sky Views currently has an observation wheel installed at Bayside Marketplace in downtown Miami and is in the midst of mounting another one in New Jersey’s American Dream retail and entertainment complex.

If approved, The Balboa Park Star – the Balboa Park observation wheel’s working title – will run anywhere between three and six months, according to Sky Views. It will also set the stage for a sky-dining experience, curated by CRG.

The impetus behind the out-the-box activation is to help draw people to the 1,200-acre historic park, said David Cohn, which has been hard hit since COVID-19.

“We are looking to reactive the park and bring people back to it,” he said. “So, we revisited this idea... that Sky Views brought in 2014 for the Centennial (celebration). We truly believe that if we think boldly and outside the box, that this could be a fun thing to play with for six months or so, temporarily, in the Plaza de Panama.”

Ben Pickett, vice president of Sky Views, said, other than providing the necessary permits, no costs will be endured by the city for the installation and operation of the observation wheel. On the contrary, it will create a handful of jobs for San Diegans.

General admission will be between $12 to $15, he said, with discounted prices for groups, senior citizens, military and children. There will be an additional charge for the dining option, Pickett added. The price will include a multiple-course meal prepared at CRG’s The Prado, located in Balboa Park, to be enjoyed while riding one of 36 gondolas. Each gondola can accommodate up to eight passengers, he said, from the same family or pod.

Elsewhere on the COVID-19 front, staff and attendees will be asked to wear face masks and maintain social distance. The use of the gondolas will be staggered (every other gondola will be skipped per rotation), so to create enough space and time in between riders for employees to completely disinfect each area.

Other Parts of the City

“The Cohns were part of the group of stakeholders we reached out to in 2014, when Sky Views was approached the first time to place an observation wheel in Balboa Park,” said Pickett. “At that time, it didn’t fit the mission of the park, and, after exhausted efforts, they changed direction and focused on a different area. When COVID-19 hit, my contact in San Diego spoke with David Cohn and they thought, maybe this is a good opportunity to revisit bringing the observation wheel back to the park on a temporary basis and use it more so as a driver to get people back in the park, into museums, institutions and restaurants.”

Pickett said he doesn’t believe Sky Views will make much revenue from the Balboa Park observation wheel because of COVID-19 restrictions. But it is a good opportunity to show locals what Sky Views is about and what it can offer the public, he said. The goal, said Pickett, is to continue to work with the city of San Diego and hopefully bring the Sky Views of America product to other parts of the city.

Negotiations to bring the observation wheel to San Diego started in September, she said. And, although there is no official launch date yet, Bowman-Styles said the wheel is one step closer to becoming a provisional fixture of Balboa Park.

“The Federal Aviation Administration project application, which is centered on the height of the wheel and the proximity to the airport, was recently approved,” she said. “We wanted to make sure at 148 feet tall, the observation wheel wouldn’t present an obstacle to aircrafts flying into San Diego International Airport, and, the approval basically says that it won’t. It was a wonderful bit of good news for us. But we still need to go through with the process.”

Once all the permits are obtained, Bowman-Styles said it would take between 10 to 14 days to install the observation wheel. The base, she said, is 56 by 75 feet and won’t leave any markings on the Plaza de Panama grounds once removed.

Bowman-Styles also said while the launch date of the observation wheel is contingent on how soon the city grants the permits, the wheel will be out of the park no later than mid-June. That is when the San Diego Museum of Art, also at Balboa Park, plans to host its annual Art of Life fundraiser event, Bowman-Styles said, and all parties involved want to be respectful of the prior engagement.