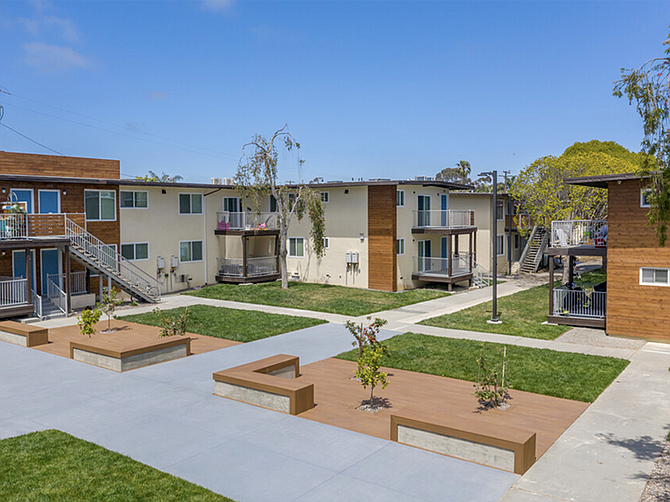 Photo courtesy of Avezta Equity. An Oceanside apartment complex was taken down to its studs in an extensive renovation project by Avezta Equity, Inc.

The company likes to acquire troubled properties and turn them around to improve neighborhoods, said Jacky Schon, Avezta co-managing member.

Renamed The Village, the 84-apartment Oceanside project is in the Crown Points neighborhood at 415 Grant Street near Oceanside High School.

Avezta acquired the property in 2017 and finished renovating it in October.

Sea Executives, a sister company, is the property management company that runs the day-to-day operations of the property.

“It’s an excellent location. It was a problem for the city and we looked at it as an opportunity,” Schon said. “It’s a beautiful area, so close to the ocean. It’s west of the (Interstate) 5. It just needed better management.”

Oceanside police said that the property had long been a problem area but that Avezta has turned it around with the renovation.

Police reported that the number of calls they’ve had to the property went from a high of 339 the year Avezta acquired it to 48 in 2020.

Schon said she and others with Avezta met regularly with police and other city officials to go over improvements they were making to the Crown Heights apartment complex and ask for suggestions.

At the suggestion of police, Avezta removed trees that were used as a spot for drug deals by gang members, replacing them with prickly bougainvillea plants, added fencing around the perimeter, repaved the parking lots and installed gated entrances to the property that operate through resident cell phones.

The property was a mess when Avezta Equity acquired it, Schon said.

Known as the blue building in Spanish because of its original color, the complex was frequented by gang members.

“We had a few units, I can’t even describe the extent of the destruction in those units,” Schon said.

Some were so bad, they weren’t fit to live in, she said, damaged by mold and mildew and generally trashed.

“It was very bad,” Schon said. “Some of the windows were new. Other than that, it was in pretty bad condition.”

To clean it up required extensive renovation.

“This is kind of like new construction,” said Diego Bastidas, co-managing member of Avezta.

“We redid the flooring, the exterior stucco on most buildings, roofs – then we rearranged the floor plans and redesigned the units,” Bastidas said.

To make the best use of space in each apartment, the kitchens and bathrooms were moved, Schon said.

“We added balconies plus exterior spaces on all units,” Schon said.

“It’s like a really different looking property,” Schon said adding that the Oceanside project was the most extensive renovation work Avezta has done.

“We’re super happy with the result. It’s been phenomenal,” she said. “The tenants have been very flexible dealing with our construction.”