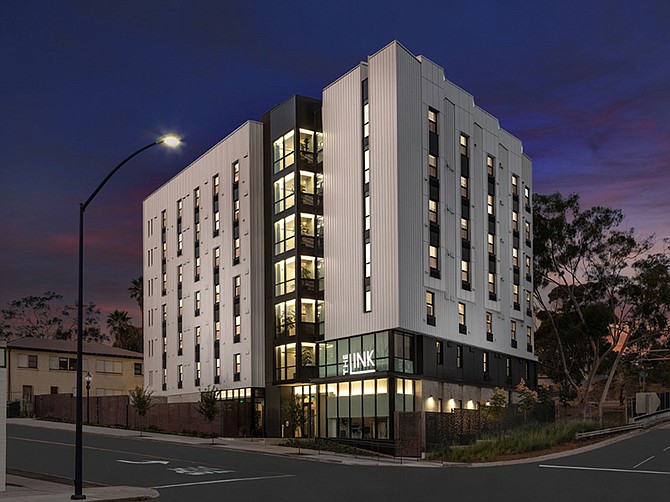 Photo courtesy of Affirmed Housing. The V-shaped design of this East Village affordable housing complex was used to work around an earthquake fault line.

A $35.5 million East Village affordable housing project posed an unusual challenge to its developer and designers – an earthquake fault line runs through the site.

The solution that developer Affirmed Housing based in Sabre Springs and Carrier Johnson + CULTURE architects based in downtown San Diego came up with was to work around the fault line.

“We found out about the fault after we did an initial design so we had to sharpen our pencils,” said Claudia Escala, principal architect and project manager at Carrier Johnson + CULTURE.

The result is a dramatic V-shaped building that stands out from its surroundings on an 11,318 square-foot lot at 707 17th St.

The project, named The LINK, serves as a landmark to a part of East Village that is still in transition.

HA Builders of Jamul was the general contractor on the seven-story, 50,000 square-foot project. ConAm Management is the property manager.

The design that Carrier Johnson + CULTURE came up with for LINK “was turning a negative into a positive,” said Jimmy Silverwood, executive vice president of Affirmed Housing.

“We were starting with a raw block of material before sculpting it,” Escala said. “The building is very straight forward but it has this really striking shape, very attractive shape.”

LINK has 86 apartments, 72 earmarked for people who have been homeless and 14 apartments for households with an annual income of 50% or less of the median area income. For a two-person household, that would be $46,200.

On-site services for residents is provided by People Assisting The Homeless (PATH) with four case managers based in LINK.

Inspired by its location near the Martin Luther King Jr. freeway, LINK pays homage to King with a memorial wall by San Diego artists Chris Puzio and Brian Lynn.

The wall also has a series of vertical wavy lines meant to represent the vines that grow in King’s home state of Georgia.

“The artwork and the quote in particular was spaced where anyone entering the building would be able to see it,” Silverwood said.

The monument also is visible to people traveling 17th Street to get to Interstate 5.

“It looks gorgeous during the day and at night, it’s really inspirational,” Escala said.

The site was a partially abandoned warehouse that Affirmed Housing demolished.

Affirmed Housing was attracted to the site in part because of market rate housing that’s been developed in East Village and the artistic-themed Makers Quarter in East Village.

“A lot of times, we’re trying to locate affordable housing near new market rate to get that blend of housing and incomes that make our communities great,” Silverwood said.

The hope is that LINK will inspire more development in its corner of East Village, Silverwood said.