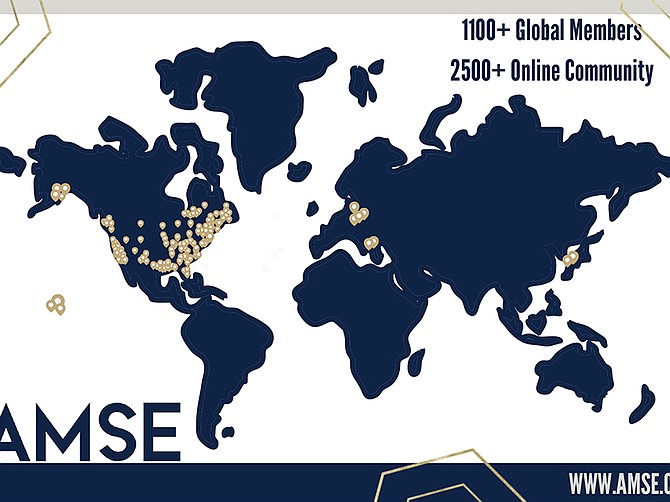 Illustration courtesy of AMSE. A world map shows the homes of military spouses participating in the Association of Military Spouse Entrepreneurs. They include people in the Pacific islands, Europe, Japan and South Korea.

Alicia Thompson of San Diego has few better friends than her laptop computer. She can take it anywhere in the country — anywhere in the world, really — and still be in business.

It’s a capability that serves her well. Thompson is a military spouse, and like all military spouses, she knows that orders to move to another part of the world could come anytime. Her business needs to be highly mobile.

People with spouses in the armed services often do not work, or are steered toward government jobs in the vicinity of a base. A few work for defense contractors. Thompson has chosen the route of an entrepreneur with her graphic design business, ThompsonCre8.

She began her graphic design career when she was in high school. These days her goal is to make $4,000 a month. As a designer, much of that goes to the bottom line. For now she works alone. She is preparing to move “full throttle” into her entrepreneurial venture by forming a limited liability company and eventually hiring employees. That may happen when her husband makes his next big career move.

Thompson said she has benefited greatly from the Association of Military Spouse Entrepreneurs, or AMSE for short. It has given her insight to the possibilities for her business, it has given her a network, and it has given her the motivation to strike out on her own.

“It’s been an amazing resource,” she said.

Flossie Hall, a U.S. Navy spouse who recently ended eight years stationed in San Diego, has been a mentor to Thompson and is one of the driving forces behind AMSE. She is its cofounder and chief operating officer.

Recalling her eight years in San Diego, Hall said the community jump-started her career as an entrepreneur. It was here that she ran the Healthy Momma meal prep and delivery company, generating seven figures in revenue. The region has an abundance of resources, mentorships and programs, Hall said. Added to that is a tremendous sense of community.

“It was the right place at the right time” for an entrepreneurial journey, she said.

Now she is helping other spouses on their journeys.

Hall and CEO Monika Jefferson, a U.S. Air Force spouse and seasoned entrepreneur, began AMSE in the summer of 2019. “We’re still learning to walk,” Jefferson said. Today the organization has 1,322 members concentrated in military communities, including San Diego. AMSE has seven chapters so far (though the closest to San Diego is in Ventura County). AMSE also offers entrepreneurship curriculum, master classes with business speakers and networking opportunities via its Slack channel.

One of AMSE’s projects is a Military Spouse Entrepreneur Guide. The 28-page newsprint guide and digital edition is distributed in partnership with Stars & Stripes, the international U.S. military publication.

The guide contains much material on how to run a business and offers resources. Articles include “Keep Going When You Want to Quit,” “Types of Businesses to Start and Why” and “Six Reasons Why Military Spouses Make Great Entrepreneurs.” Advertisers in the guide include Amazon.com and the Defense Department’s Office of Financial Readiness.

More important, perhaps, is that the guide offers a directory of military entrepreneur businesses — allowing military families and spouses to support one another’s efforts.

Some 80,000 copies of the inaugural guide were distributed at military bases across the United States as well as in Germany, Japan and South Korea.

A second issue, set for February, will be distributed at San Diego military bases, Hall said.

Getting That Second Income

One of AMSE’s long-term goals, said Jefferson, is to have the military provide entrepreneurship training at bases, beside all the other services that the base offers families.

Right now there are very few resources for spouses who want to go into business for themselves, the co-founders said, adding there is no other organization that caters exclusively to the military spouse entrepreneur.

AMSE is unabashedly a for-profit entity. “We’re entrepreneurs,” Jefferson said, adding that making money is not a bad thing. AMSE has two levels of membership: a basic package that is free of charge, and a premium membership with a monthly fee. The founders declined to disclose revenue.

The fields that military spouses pursue typically fall into the area of marketing, coaching, consulting, public relations, health and wellness. “Military spouses need to work in fields that are portable and digital,” Hall said, “anything you can do with a laptop and Wi-Fi.” There is some e-commerce.

Some military spouse ventures have seven figures in revenue, but their number is few. “Those are the outliers,” she said. Some 70% of AMSE members have business revenue of less than $10,000. “They need to figure out how to just get started,” Hall said. “We provide education and curriculum, ideation to launch.”

Hall and Jefferson think the time has come for an organization such as AMSE. Both said they wished there had been such an organization when they had started their businesses.

“Military Spouses are often left behind to pick up and coordinate the chaos of the family and the home because a service member’s career must come first,” Hall said. “However, the narrative is now getting louder and military spouses can have rewarding and meaningful careers as well. We can find passion and purpose in our work. We can do it all while juggling our families and our military life by doing it on our own terms, as entrepreneurs and small business owners. Today, we are coming together to help more spouses realize that they too can have the dream of owning their own career or business. It’s our turn. Our time is now.”