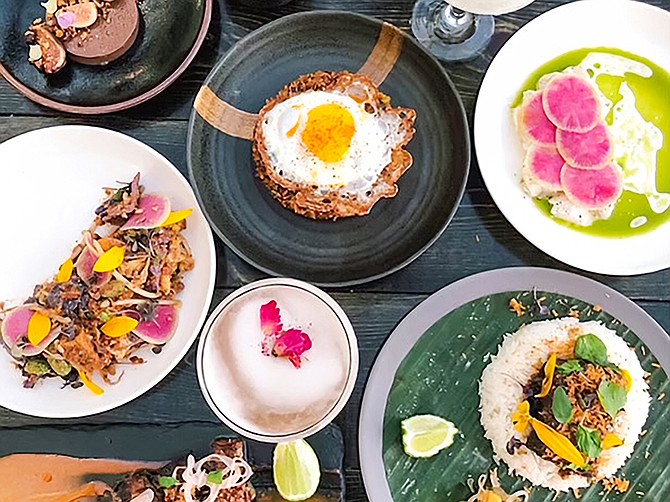 Photo courtesy of Dija Mara. Dija Mara, a Southeast Asian and Balinese restaurant in Oceanside, was one of Michelin Guide's 25 favorite discoveries of 2020.

The booming San Diego food scene continues to get recognized by the Michelin Guide.

Last summer, the restaurant rating system announced William Bradley’s Addison at the Fairmont Grand Del Mar was the recipient of one coveted Michelin star. This appeared in its inaugural all-California edition, the “Michelin Guide California 2019.” It included restaurants in San Diego, as well as Los Angeles, Orange County and Santa Barbara.

This year, in lieu of producing the 2020 California Guide due to COVID-19, Michelin highlighted its 25 favorite restaurant discoveries made in 2020, based on new and inspiring culinary talent.

Five of those restaurants are located right here, in San Diego.

The names of those restaurants were revealed last month during a live-streamed virtual event dubbed the “Family Meal”. The hourlong affair was created to support California restaurants and to honor their creativity, strength and resilience. The eateries were discovered by Michelin inspectors during their undercover dining visits just last spring, before the pandemic hit.

Local food and beverage places are still at limited capacity due to COVID-19 restrictions. But a Michelin nod can boost a restaurant’s traffic significantly, according to experts. In 2017, the late Michelin-starred Chef Joel Robuchon told Food & Wine Magazine that star ratings can increase a restaurant’s business by roughly 20% with just one star, 40% with two stars and up to 100% with three.

Balinese Cuisine with a Twist

Simran Soin, founder of Dija Mara in Oceanside with business partner Rob Jones, said it is their willingness to think outside of the box that she is most proud of.

Dija Mara is one of the only restaurants in North County with a natural wine program, said Soin, which means it features wines with no added yeast chemicals or sulfates. This is yet another reason she believes the restaurant stood out among the rest before the Michelin inspectors.

Since being highlighted on the “Discoveries” list, Soin said more out-of-towners have become aware of the brand. In the last few weeks, she said she has noticed more Dija Mara is all about. way down to Oceanside, wanting to see what all the hype is about at Dija Mara.

“We don’t have a public relations person – we do everything ourselves,” she said. “Our sign is not big. We are more of a hidden gem. Hopefully, now more people will come and appreciate what Dija Mara is all about..”

Validation at its Finest

At Morning Glory, the Michelin Guide inspector celebrated the souffle pancakes as well as the fried rice with pork belly and eggs with runny yolks. Of the latter, he said it is a “great riff on tradition”.

For Arsalun Tafazoli, founder of Morning Glory, the accolade may not mean much toward the restaurant’s bottom line, specifically during the coronavirus crisis. But the acknowledgement is validating, he said.

“With Morning Glory, we really felt breakfast meal was not being taken serious or given the credit it deserved,” he said. “We knew we wanted to work on this and change this perception. It’s the first meal of the day and really sets the tone for the rest of your day. We wanted to give it the respect it deserves. To get that Michelin nod and be the only one serving one meal on there is pretty special. It validates our thought process and all of our efforts.”