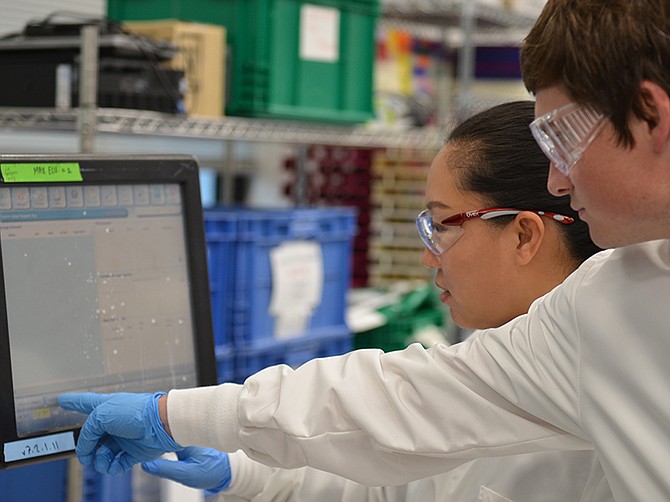 Photo courtesy of Hologic. Research and development scientists Yecong Li, Ph.D., left, and Brian Dockter operate a Panther machine at Hologic. The company received a $119 million award to expand its capacity to produce tests that can detect SARS-CoV-2, the virus that causes COVID-19.

Hologic Inc. received a $119.3 million U.S. government contract to build out capacity to produce SARS-CoV-2 molecular tests, as well as consumables for those tests. The Pentagon announced the deal on Oct. 30.

The contract will support capital and labor investments enabling Hologic to provide 13 million COVID-19 tests per month for the U.S. market by January 2022.

Hologic’s contract provides for the expansion of manufacturing capabilities through additional equipment, facility infrastructure and materials and supplies.

The tests run on Hologic’s fully automated Panther Fusion and Panther systems, which provide initial results in approximately three hours and process more than 1,000 tests in 24 hours. More than 2,000 Panther systems have been installed in clinical diagnostic laboratories around the world, including in all 50 U.S. states.

“Hologic has already made significant investments in our test production capacity, which have resulted in our contributing tens of millions of COVID tests to the United States supply,” said Kevin Thornal, president of the Diagnostic Solutions Division at Hologic. “Our manufacturing teams continue to innovate to increase our contribution, and we are very pleased to partner with the federal government to further our ability to meet the ongoing public health need.”

This award is the result of a competitive acquisition.

Cubic Corp. announced on Oct. 12 that its Cubic Mission and Performance Solutions business division received a $7.5 million contract to develop and flight-test prototype software-defined radios for the U.S. Army. The contract is part of an effort to develop a next-generation datalink waveform for unmanned aircraft systems as well as manned-unmanned teaming. The radios will feature an emerging communications waveform, designed to operate in contested environments.

“Our cooperation with the U.S. Army will embed the most modern and resilient protected communications capabilities into a deployment-ready form factor to meet war fighter needs,” said Mike Knowles, president of Cubic Mission and Performance Solutions.

Cubic’s advanced solution will be offered in a package with optimized size, weight, power and cooling for hosting on several host platforms including the U.S. Army’s small unmanned aerial system platforms. Successful flight tests at the end of the one-year program are expected to inform future waveform specifications and future related acquisitions.

One percent of the work, worth approximately $2 million, will be performed in San Diego.

The contract includes options which, if exercised, would bring its cumulative value to $2.22 billion, with an estimated $22 million going to San Diego.

Ninety percent of the work will go to the U.S. Navy. The balance will be for the governments of Canada, Japan and Australia.

Work is expected to be completed by June 2030.

The government did not put the contract out for public bid, as it determined there was only one contractor that could satisfy agency requirements.

The U.S. Navy awarded Gryphon Technologies a $14.6 million contract for technical and engineering services. Under the deal, Gryphon will perform ship checks to collect data and develop ship installation drawings for landing helicopter dock platforms. Some 12% of the work, worth an estimated $1.75 million, will be performed in San Diego. Work is expected to be complete by April 2021. Gryphon Technologies is based in Washington, D.C. and has an office in Chula Vista. The contract was competitively procured via the beta.SAM.gov website, with four offers received. The Norfolk Naval Shipyard at Portsmouth, Virginia awarded the contract, announced on Aug. 14.