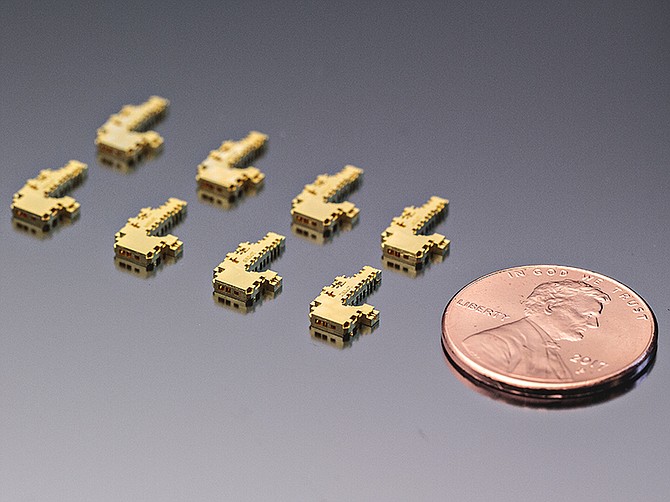 Photo courtesy of Cubic Corp. Nuvotronics electronic components, shown next to a penny to indicate size, can put a lot of circuitry into a small volume. The Cubic Corp. subsidiary forecasts growth in demand for such products.

Nuvotronics, a subsidiary of San Diego-based Cubic Corp., plans to spend $50 million over five years to expand its manufacturing plant in North Carolina and add 150 jobs there. Cubic is forecasting high-volume production of Nuvotronics products for the space systems, defense and commercial markets.

Kearny Mesa-based Cubic bought Nuvotronics last year. The business produces microelectronic components with a unique architecture it calls PolyStrata, which offers a way to substantially reduce the size of electronic circuitry. Such components can be used in microwave and millimeter wave radio communications. The products are suitable for defense as well as commercial applications, including satellite use.

Nuvotronics developed its technology with the help of the Defense Advanced Research Projects Agency, or DARPA, the Pentagon’s R&D agency.

North Carolina Gov. Roy Cooper announced that his state will award Nuvotronics up to $1.17 million in incentives to expand within the city of Durham. The business is located in the state’s Research Triangle area, among high-tech industries near major research universities.

“The production equipment we’re putting in is really state of the art,” said Martin Amen, vice president and general manager for Nuvotronics.

Building the electronics is an additive process. Circuits produced that way can offer 10 times or 100 times more performance from what is commonly offered today, Amen said.

Cubic announced its purchase of Nuvotronics in March 2019. It has so far paid $66.8 million and promises an additional sum that will depend on the company’s future performance.

The major (or Tier 1) defense contractors have used the technology, as well as NASA and the Air Force Research Laboratory. “Since 2008, we’ve been involved with R&D projects that have really proven this technology out,” Amen said.

Nuvotronics has 40 patents. There are significant barriers to entry to working in this technological space, Amen said.

Markets and Markets anticipates the global millimeter wave technology market will grow from $1 billion in 2020 to $3.4 billion by 2025, at a compound annual growth rate of 26%. This will be due to the expected global deployment of fifth-generation (5G) telecommunications infrastructure as well as the launch of Low Earth Orbit (LEO) satellite constellations.

In September, the U.S. Defense Microelectronics Activity certified Nuvotronics as a trusted source for post processing and package/assembly services. Nuvotronics is now part of the Defense Department’s trusted and assured suppliers of microelectronic parts essential to combat operations.

The accreditation “puts Nuvotronics in a unique and exclusive position to provide the U.S. government and its supporting subcontractors with a consistent, reliable and secure supply chain, free from counterfeit or manipulated electronic parts,” Mike Knowles, president of Cubic Mission and Performance Solutions, said in a statement. The Pentagon has identified counterfeit parts as a problem for the U.S. military.

Cubic has been in the news for other reasons. Its stock price rose more than 30% on Sept. 21 on a report that Elliott Management was interested in buying the company. There has been no significant news since then and the stock has held to about the same price since. It closed on Nov. 3 at $61.00.

Analyst Ken Herbert of Canaccord Genuity Capital Markets has a $65.00 price target on Cubic. “We believe $65 would be the baseline for a potential acquisition, and we are maintaining our buy rating,” he wrote in an Oct. 1 research note.

He said continuing as a public company would likely be a negative for Cubic.

Cubic got 56% of its 2019 revenue from a business that sells fare collection equipment and other specialized equipment to regional transportation agencies around the world.