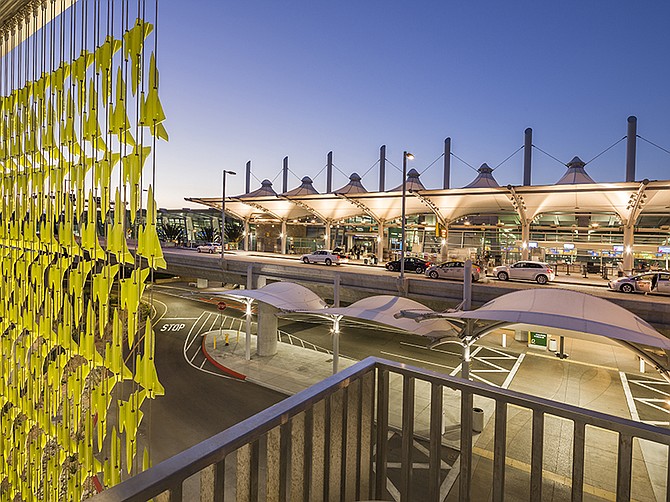 Photo courtesy of San Diego County Regional Airport Authority. San Diego International Airport is one of the fastest recovering airports in the country, according to a recent report.

San Diego International Airport (SAN) is one of the fastest recovering U.S. airports from the COVID-19 travel slump, according to current data.

Released in late October, SAN landed at No. 13 on the “Airport Recovery Index” report by FinanceBuzz.

Using the most recent data available from the U.S. Bureau of Transportation, the Utah-based personal finance company looked at metrics from the 30 busiest airports in the United States. It studied departing passenger count from April 2020, when travel was at its lowest since COVID, and measured it against June 2020, the most recent data available.

San Diego International Airport’s departing passenger count in April was 36,877, as per the study. By June, that number had grown to 209,490. At No. 13 on the “Airport Recovery Index” tally, SAN had a positive percentage change of 468.08% overall.

“There are many different factors which will influence the number of people traveling through our airport the next few months,” she said. “Industry analysts say it will take until 2024 to see the same numbers the airline industry saw in 2019. My hope is that SAN’s rate of recovery will continue to be consistent with the national average and through the many health and safety modifications which airports and airlines have implemented, we will continue to restore customer confidence in flying.”

“In early October, SAN released a video talking about different ways to keep travelers safe as they travel through the airport,” he said. “They are requiring masks throughout the airport, including during dining and in boarding areas. Also, all the high touch areas are being cleaned all of the time. Passengers can skip going up to an agent while checking in and can instead use a kiosk, which will then be disinfected before the next person uses it. That’s just an example of a high-touch area and the protocols being implemented. For physical distancing, SAN has increased spaces between diners in dining areas as well as in boarding areas. There are signs on every other seat, so that travelers can sit apart. These are all huge steps taken in promoting travel and keeping everyone as safe as possible.”

In order to ease travelers’ worries about COVID-19 while traveling through SAN, the San Diego County Regional Airport Authority took a number of COVID-19-focused preventative measures, dubbed the “Let’s Go Safely” program, according to the airport’s Sabrina LoPiccolo. To Walker’s point, this includes the addition of plexiglass sneeze guards at various ticket counters, floor decals and seat separation signage throughout.

To get the word out, she said SAN regularly plays public announcements via its loudspeaker system, reminding passengers to keep their masks on and practice social distancing, among other health and safety practices. The SAN.org website also has all the pertinent information on how to travel safely at the airport, said LoPiccolo.

The executive team at SDRCAA has also made it a point to work together with community stakeholders, like the San Diego Tourism Authority and the San Diego Regional Economic Development Corporation, to continue to push forth these efforts. Additionally, SDRCAA is active on its social media pages, said LoPiccolo. It recently launched a newsletter that reaches 47,000 subscribers, which includes all of the safety protocols and regular updates, among other information.

Most recently, SAN was one of nine airports in the United States to achieve Airports Council International World’s “Airport Health Accreditation” for its health and safety campaign.