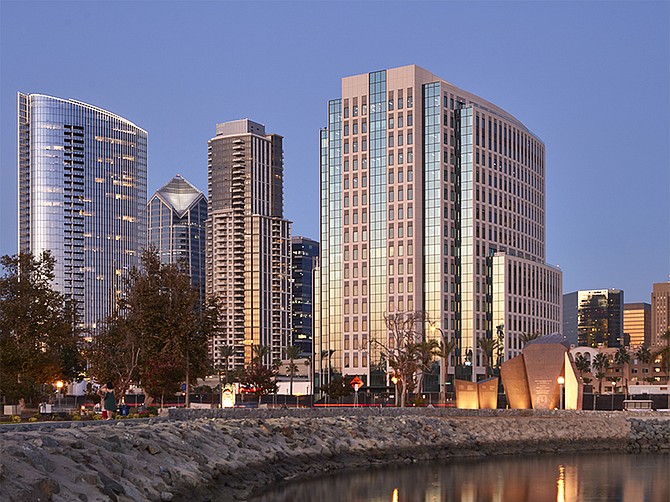 The Navy is slowly moving from a former warehouse that had been its headquarters in downtown San Diego for nearly 100 years into a newly finished, gleaming 17-story office tower along the Bayfront.

With a price tag pegged at $212 million and designed by Gensler, the project was built and paid for by Manchester Financial Group as part of a development agreement covering the area.

The new building is meant to resemble a Navy ship arriving in port, with a curved façade like the prow of a ship.

Paving stones in a wide plaza that surrounds the building are arranged in a pattern to resemble the wake of a ship.

“The nautical theme is pervasive to the building,” said Kevin Heinly, principal and managing director of Gensler in San Diego. “There’s an integration of Navy artifacts throughout the building.”

Turner Construction was the general contractor.

The 375,000 square-foot building was designed in a way that makes it appear lighter as it rises.

“This is a hardened facility and it’s secure and it’s blast proof and all those things, but it’s also inviting,” Heinly said, with 57,000 square feet of open space around the building.

The building façade is glass and precast concrete, which Heinly said “contributes to the building’s strength, representing the Navy’s strength.”

The exterior color scheme was modeled after other downtown landmark buildings, such as the nearby county administration building.

The new Navy building is what Heinly described as “kind of a warm beige but it has warm gray accents at the window headers.”

“What looks to be a lighter color during the day starts to evolve a bit as the sun starts to set and pick up those hues from the sunset,” Heinly said. “The building kind of changes its appearance in a way and starts to capture some of the beautiful colors of the sunset.”

The Navy project is part of the Pacific Gateway Master Plan that includes the $1.5 billion San Diego Research and Development District (RaDD) planned by the Solana Beach-based IQHQ.

“This is going to be a thriving life science complex bringing research and innovation to downtown San Diego, which I think is a very complementary use to having the Navy headquarters there,” Heinly said. “I believe that this isn’t just a Navy building sitting in a mixed-use project. I think this is a project that’s going to become very synergistic to all that RaDD will bring to the site.”

Under terms of the development agreement covering the area, the Navy building had to be part of the initial construction.

“It’s really going to transform downtown by cleaning out their old building and getting them into a brand new Class A office building. They may be there for another 100 years. They don’t build new buildings very often,” said Perry Dealy, president and CEO of Dealy Development, Inc. “They’re going from World War I standards into 21st century standards.”

The new building’s nautical theme is carried through the main lobby, which has a two-story marble wall with a glowing glass Navy seal in the center, flanked with rope and brass accents.

A security desk at the center was designed to resemble the stacked stripes on the arm band of Navy uniforms.

To one side of the lobby is a 4,200 square-foot multi-purpose room that can be divided into three smaller rooms and a 1,800 square-foot exterior patio.

There’s also a 100 square-foot barber shop and room for a planned café and retail shop.

Every floor also has a 160 square-foot break room and a coffee galley of about 100 square feet.

The structure was built on 854 concrete piles that were sunk 70 feet into the ground. The piles effectively hold the building down, keeping it from floating on underground sea water.

The new building is designed to accommodate up to 1,750 people with an initial workforce of 1,450, but staffing will be far below that to start because of the COVID-19 pandemic, said Joe Stuyvesant, executive director of Navy Region of the Southwest.

As with many private business, many of the Navy staff that would be in the building are working from home.

Navy personnel started moving into the new building in small groups starting in late October with the move expected to be completed in mid to late November.

The difference in accommodations between the old converted warehouse and the new building is striking, Stuyvesant said.

“It felt like you were in a cave., not many windows. It was a struggle to keep it habitable. We had regular flooding events, power problems, rodent infestations.” Stuyvesant said. “The way we were laid out was very inconsistent and it was not easy to get from one place to another in the building. You had to go somewhere else in the building to get where you wanted to go.”