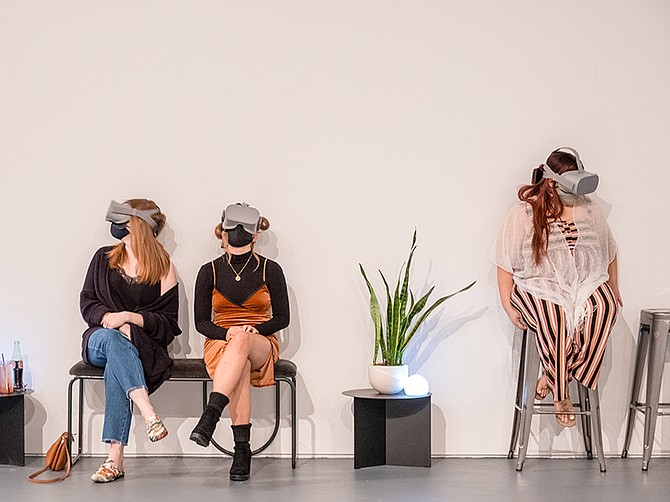 Photo courtesy of Charles Darr. Wonderspaces San Diego LLC has launched a three-film virtual experience series at Liberty Station. The pilot program will run through the end of the year.

Wonderspaces, Inc., the pop-up immersive art production company headquartered in Los Angeles, has returned to San Diego despite the pandemic.

On Oct. 22, Wonderspaces San Diego LLC kicked off a virtual reality film series at Liberty Station. The activation is in conjunction with NTC Foundation, a nonprofit that manages ARTS DISTRICT Liberty Station.

The three-film series will run through the end of the year, with expectations of extending it into 2021. So far, “Gloomy Eyes”, the first movie showing through November 15, has sold out both weekends, according to the company.

Jordan Thomas Hill, general manager of Wonderspaces, said the company was inspired to host a standalone virtual reality experience based on the reception the VR installations usually get as part of its main event.

“We’ve been showing VR films and experiences since 2017 and the technology has grown every year,” he said. “We saw an opening to show longer and more immersive films. The big difference between the previous shows and the one we are doing now is the length – most films are about 30 minutes long – and the visitor’s ability to really immerse him or herself. Though we will always plan and curate our typical shows, we are looking down new paths on how to bring different art forms to the community.”

The Way it Works

Each person will be walked through the experience prior, Hill said. The proper use of the ocular headsets and VR masks will be explained followed by a chat about the film’s creators as well as a brief synopsis on what the film is about. “Gloomy Eyes”, for example, is about a zombie boy that falls in love with a human girl, said Hill, and viewers will be able to view it via individual 360-degree spinning chairs.

“Gloomy Eyes” will be followed by “Battlescar”, which will show from Nov. 19 to Dec. 6. The clip is about the 1970s punk scene in New York City through the eyes of a Puerto Rican girl, said Hill. “Traveling While Black” will be the final film showing, he said, from Dec. 10 to Dec. 13, with the hopes of adding more showtimes through the end of the year.

Because of COVID-19, Hill said the experience is somewhat limited. While the leased 2,500 square foot space can hold up to 140 people, only 12 visitors plus two employees can be in the space per hour. All are required to wear face coverings and will have their temperature taken, he said, and each chair is positioned six feet apart or more for social distancing purposes.

Upon exiting, all equipment will be sanitized before the next group is allowed in, said Hill.

Additionally, no cash is allowed as all tickets are sold online, and no walk-ups are permitted in order to better manage the amount of people in the building at once.

Lisa Johnson, president and CEO of the NTC Foundation, said it created a short-term commercial space rental program in March as a result of the pandemic that allows companies like Wonderspaces to test out experiences at Arts District Liberty Station.

“We call it our short-term space use program, through which tenants can rent a space for as little as a week and up to a year without any long-term commitment,” she said, adding that Liberty Station is running at about 91% these days. “Wonderspaces is a good example of this. We created a simple, streamlined program to allow tenants like Wonderspaces that want to pop-up and test out an experience. And, also, our current tenants that may need some additional space for social distancing purposes. It is beneficial for us, but also for them to try something out and take it from there.”

The Liberty Station virtual reality pop-up event is a pilot program for Wonderspaces, with the hope of taking it to other cities starting next year. Hill said Wonderspaces, with permanent installations in Scottsdale, Arizona, Philadelphia, Pennsylvania, and Austin, Texas, is hoping to sign a long-term lease in San Diego soon.