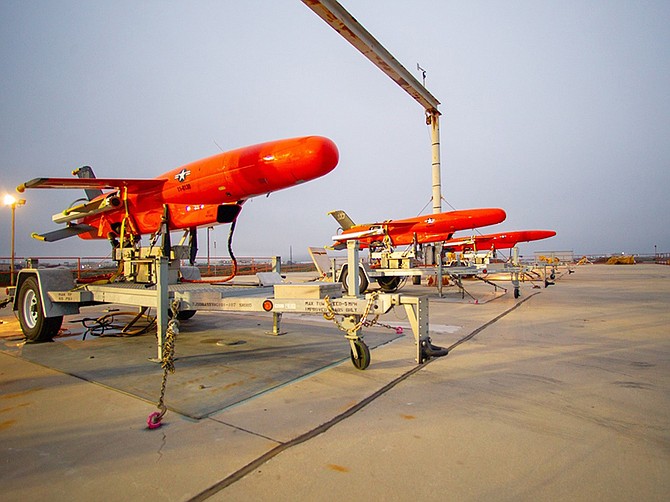 Kratos Defense & Security Solutions Inc. (Nasdaq: KTOS) announced on Oct. 5 that it received an initial $29.2 million full rate production contract for Lot 1 of the BQM-177A subsonic aerial target (SSAT) drones from the U.S. Navy for the procurement of 35 target aircraft and technical data.

Steve Fendley, President of Kratos Unmanned Systems Division, said, “This FRP 1 [full rate production] award, coupled with the site activation efforts we are undertaking around the globe in support of the U.S. Navy, in spite of the significant challenges posed by the current pandemic, represents a huge stride forward towards achievement of full operational capability for the BQM-177A SSAT within the coming fiscal year. Kratos is immensely proud of our role as the sole-source provider of this high-performance unmanned aerial system emulating the most advanced cruise missile threats posed by potential adversaries. We look forward to providing this revolutionary and evolutionary capability to the U.S. Navy and its allied and coalition partners for the next several decades, with this program and platform expected to be one of our most important and fastest growing.”

Kratos has its headquarters in Scripps Ranch. Work under this particular contract will be primarily conducted in Kratos facilities in Sacramento and Fort Walton Beach, Florida. The total contract value if the options for Lots 2 and 3 are both exercised at the maximum production quantities is $130.1 million.

Separately, on Sept. 29, Kratos announced that it received a multimillion dollar order for 20 high performance target system aircraft from a key, long-term, international customer, which was unnamed. Work under this contract will be primarily conducted in Kratos’ new facility in Oklahoma City.

The U.S. Navy awarded MA Engineers JV, a small business joint venture based in San Diego, an indefinite delivery, indefinite quantity architect-engineering contract for mechanical engineering, electrical engineering and plumbing services located in the Naval Facilities Engineering Command Southwest area of responsibility. An estimated 86% of the work will be performed at Navy and Marine Corps facilities in California. The contract could be worth as much as $30 million.

The work to be performed provides for preparation of requests for proposals, construction contract packages and support services, mechanical and electrical site investigations and fire protection engineering. Work is expected to be complete by September 2025. This contract was competitively procured via the Federal Business Opportunities website with seven proposals received. The Naval Facilities Engineering Command Southwest in San Diego awarded the contract, announced on Sept. 30.

The U.S. Navy awarded Raytheon Co. of Tewksbury, Massachusetts, a $12.7 million ceiling increase and a 21-day period of performance extension modification to a previously awarded, cost-plus-fixed-fee contract for Cross-Domain Maritime Surveillance and Targeting. Some 10% of the increase, worth $1.27 million, is expected to be performed San Diego. DARPA, the Defense Advanced Research Projects Agency, says the Cross-Domain Maritime Surveillance and Targeting program “seeks to identify and implement architectures consisting of novel combinations of manned and unmanned systems to deny ocean environments to adversaries as a means of projecting power.” Work is expected to be completed by November 2021. This modification brings the total cumulative value of the contract to $53.5 million. The Naval Information Warfare Center, Atlantic in Charleston, South Carolina awarded the contract, announced on Oct. 22.

The U.S. Navy awarded CAPE Environmental Management Inc., a small business based in Honolulu, a $90 million cost-plus-award-fee modification to a previously awarded indefinite delivery, indefinite quantity contract for environmental remedial action services at various sites within the Naval Facilities Engineering Command Pacific area of responsibility. This modification brings the total cumulative contract value to $185 million. The work to be performed provides for, but is not limited to, remedial actions such as removal actions, expedited and emergency response actions, pilot and treatability studies, facility operation and maintenance and performing other related activities associated with returning sites to safe and acceptable levels. Some 25% of the work will be performed in California and is expected to be completed by July 2021. The Naval Facilities Engineering Command Pacific at Pearl Harbor awarded the contract, announced on Oct. 14.

Technology Security Associates Inc., or TSA Inc., a small business based in California, Maryland, received an indefinite delivery, indefinite quantity contract that could be worth as much as $83.3 million over five years. One percent of the work, worth approximately $833,000, will be performed at Naval Air Station North Island. The contract provides a full range of platform security and related support services to include security modeling, program security management, trusted systems and network, cybersecurity, anti-tamper, system security engineering, international programs security support, acquisition security support, communications security support and physical security, force protection, anti-terrorism and emergency management support for the Naval Air System Command and the Naval Air Warfare Centers. Work is expected to be completed by October 2025. This contract was competitively procured as a small business set-aside; two offers were received. The Naval Air Warfare Center, Aircraft Division of Patuxent River, Maryland, awarded the deal, announced on Oct. 20.