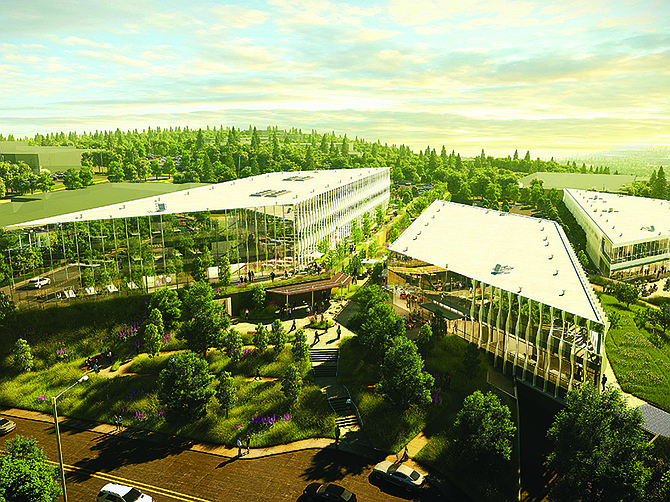 A Torrey Pines office campus is getting a $100 million makeover to convert it to updated lab space for the life science industry.

Muse at Torrey Pines is being given a whole new look, inside and out by The RMR Group, Inc. including new building skins.

Comprised of three buildings at 3030, 3040 and 3050 Science Park Road, Muse sits high on a bluff and had been leased to Scripps Research, which vacated the campus in mid-2019.

“We really felt here was a compelling opportunity to kind of bolster the class of the buildings,” said Chris Bilotto, vice president of asset management for The RMR Group.

Prior to the renovation, Bilotto said the campus buildings were probably Class B or Class C – not the top of the line Class A space that The RMR Group is shooting for, especially given its high profile location on a hillside in the heart of San Diego’s life-science cluster.

“Torrey Pines is the standard for life science locations in San Diego,” Bilotto said. “From each of the buildings you really get a full panoramic view ether from the space itself or some of the areas as you wander through the campus.”

The three buildings are being gutted down to the slab and structural steel, Bilotto said.

The redeveloped buildings will have exposed ceilings to give the spaces an airier feel with floor-to-ceiling glass.

In keeping with the life-science orientation of the campus, the new exteriors will have fins and other architectural features that resemble the double helix structure formed by the double-stranded molecules of nucleic acids such as DNA.

“It’s almost a new development,” Bilotto said of the redevelopment of the three buildings. “They hadn’t gone through any major upgrade in many, many years given where the market is today.”

The redeveloped campus will include lounge areas, an indoor/outdoor training and conference center, a restaurant, a fitness center, showers, bike and surfboard storage, and charging stations for electric vehicles.

There also are three underground parking garages and surface parking.

“We put a lot of thought into exterior elements of the campus, with walking trails integrating nature and art,” Bilotto said. “There’s really and outdoor experience here that lends itself well to the San Diego climate.”

The largest of the three buildings – the three-story 3030 Science Park Road will be delivered to whomever leases the space as a shell with a finished lobby.

The lobby features a soaring ceiling that goes up two stories.

The two-story 3040 Science Park Road will have the amenities on the ground floor and about 10,000 square feet of office/lab space.

The second floor of the 3040 building will have about 23,000 square feet of be fully finished space, Bilotto said.

“It’s effectively intended to be move-in ready. With that, you’ll have the flexibility to add equipment, depending on your needs,” Bilotto said.

The two-story 3050 Science Park Road will be delivered in shell condition with interior improvements up to tenants.

So far, the COVID-19 pandemic has had little effect on the project, Bilotto said.

With construction started in October, all of the entitlements that required city approval were in place prior to the pandemic.

Construction started in October, by which time all the permitting was in place.

“There are some areas that have slowed, but not necessarily impacting overall schedule,” Bilotto said. “Everyone has been really good of accommodating virtually what we need and giving responses. For the most part, we haven’t seen a material impact.”

Leasing is led by Grant Schoneman and Chad Urie, managing directors of the commercial brokerage JLL in San Diego.

The property is owned by Diversified Healthcare Trust (NASDAQ DHC) based in Newton, Mass. and managed by The RMR Group, also based in Newton with regional offices in San Diego.

Ferguson Pape Baldwin Architects was the designer and Rudolph and Sletten General Contractors & Engineers is the builder.

Nearly $5 billion has been raised by venture capital funds for the biotech market, Urie said.

Scheduled for completion in the fall of 2020, Muse will become available for lease at a time when there is virtually no lab space available in the Torrey Pines area.

“Overall, this is a project that we’re excited to deliver to the market,” Bilotto said, adding that several companies have already inquired about leasing space in the campus.

“We have ongoing dialogue with several different tenants,” Bilotto said. “Activity has been good, given the economic volatility.”