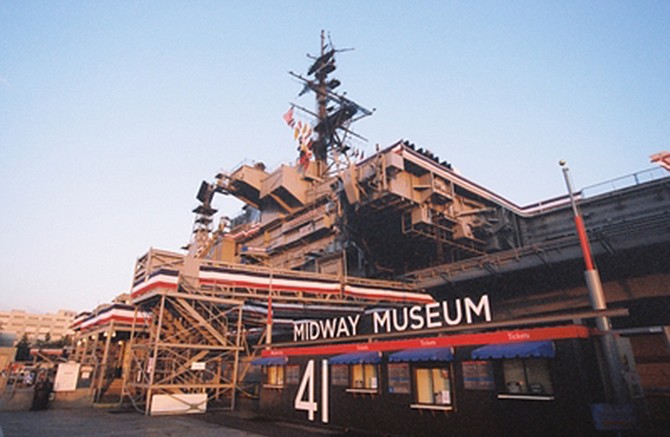 Every year, the USS Midway Museum has approximately 1.4 million guests come onboard. This year, thanks to COVID-19, it is unlikely that will happen.

But like many other attractions and destinations in town, the USS Midway swiftly pivoted in order to stay in tune with its members and continue to connect with its fans by facilitating the worldwide web, specifically its website and its social media pages.

As of March 27, the USS Midway, which normally employs 300 and counts on approximately 1,000 volunteers, is offering virtual tours, among other web-based activations, all available on the Midway.org site.

“During our temporary closure, we want to stay connected and engaged with our museum members, fans and followers and the general public,” said David Koontz, marketing director at the USS Midway. “We introduced a fun and educational online virtual experience, giving people the unique opportunity to visit the ship from home. They can visit our website and enjoy exhibits and ship spaces, listen to the award-winning audio tour, view an extensive naval aircraft gallery, find fun kid activities and read about and hear from the heroic sailors who served on the USS Midway.

“Our goal is to continue to add new content to our virtual online experience as often as possible.”

These programs include the “Midway’s 360 Virtual Tour,” where viewers can check out the flight deck, hangar bay, aircraft and various ship spaces through 360-degree imagery; the “Museum Audio Tour,” the USS Midway’s audio tour that takes listeners from the flight deck and galley to hangar bay and engine room and through which they can hear Midway sailors describe their lives on the shipboard; “United Stories of America,” the museum’s new docuseries on those who served on the aircraft carrier; “Ship’s Stories,” on which the USS Midway’s ship historian and others share stories of naval history; “Aircraft Gallery,” where one can learn about the Midway’s 30 restored naval aircraft from over seven decades; “Little Skippers,” with kids’ focused activities; and “Operation Frequent Wind,” a section on the site commemorating the 45th anniversary of the evacuation of Saigon by the same name.

“We were initially planning to hold onboard activities related to this important anniversary,” said Koontz, “but this year we are making it a virtual and interactive experience.”

For Mac McLaughlin, the president and CEO of the USS Midway, it would have been a shame if the USS Midway — the most visited ship museum in the world, he said — wouldn’t have taken advantage of its more than 60 exhibits, 30 military aircrafts and its overall rich naval history.

“During a visit to the USS Midway Museum, there are many exciting and inspiring experiences for our guests, including the award-winning self-guided audio tour of the flight deck, hangar deck and below deck areas,” said McLaughlin, “the Battle of Midway Theater, more than 30 military aircraft displays, flight simulators, docent talks, and the junior pilot program.”

The USS Midway Museum first opened to the public in June 2004 and hosts more than 1 million guests each year, according to McLaughlin. Commissioned in 1945, he said it was named after the climactic Battle of Midway of 1942. The ship served for 47 years, “the longest serving aircraft carrier during the 20th century”, said McLauglin, “supporting U.S. military and humanitarian efforts around the world.”

Nearly 250,000 sailors and officers served their country aboard the USS Midway, he said, before it was retired in 1992.

Visitation to the USS Midway Museum follows a seasonal pattern, McLaughlin said, with higher attendance during the summer months and other annual peak holiday periods. So, when the novel coronavirus crisis first hit stateside, the USS Midway was just weeks shy away from getting its prime season started.

Until the country opens back up, Koontz said the plan is to stay active online and regularly promote USS Midway’s virtual experiences through social media, emails, media advisories and employee and stakeholder sharing. In the meantime, it will continue to closely monitor the COVID-19 situation and prepare a plan to reopen that follows public health requirements and protocols, he said. This includes personal protective equipment, social distancing measures, cleaning and sanitation, employee screenings and training and guest communication through signage and web messaging, he said.