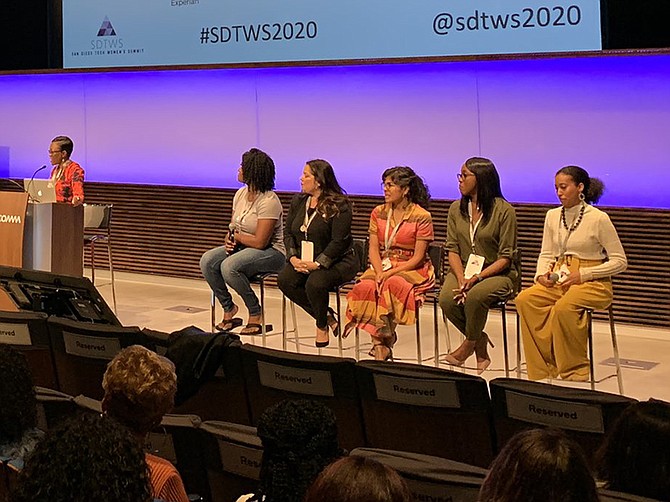 Photo courtesy of Athena. Blacks in Tech is dedicated to increasing the representation of female African Americans in STEM occupations.

San Diego Women’s Tech Summit, an annual conference that celebrates the region’s diverse woman leaders in technology had more than 300 attendees at its inaugural event. The summit was held at Qualcomm Campus on March 7 as part of International Women’s Day commemoration.

San Diego recently ranked as a “Top 5 Superstar City” for its national standing in high-tech job growth, by the Brookings Institute.

In parallel, San Diego is welcoming tech titans like Amazon, Apple, Teradata and Tesla to the neighborhood as they establish proximity to the region’s diverse STEM (science, tech, engineering and math) workforce.

However, a puzzling fact persists, even as UC San Diego graduates more women in STEM than any other university in the nation, women are significantly underrepresented in STEM occupations, specifically in leadership.

According to Athena’s 2018 STEM Workforce Equity Index, women account for only 23% of San Diego’s STEM workforce. Nationally, women are not faring much better, accounting for 25% of the STEM workforce.

Although women are now gaining awareness about the variety tech fields, not all women pursuing a STEM career are finding their way to success. As a result, local woman advocacy groups founded the women’s tech summit to upend this trend.

Founded in 1998, Athena, is a women’s empowerment advocate that fast tracks women in STEM through leadership development. The organization’s goal is to widen the bridge and empower one million women leading in STEM, by 2030.

Last month, during the World Economic Forum, Wall Street giant Goldman Sachs chief executive, David Solomon declared his firm will not take companies public without at least one “diverse” board director, with an emphasis on women.

In addition, he cited the significant outperformance of the company’s portfolio with women on their boards as the primary motivation.

Smithson said, she sees a trend of companies – in the business to make money and drive shareholder value – working to “modernize” their workforce by increasing the numbers of women in their boardrooms.

“It’s an incredible movement that is afoot and driven by data. It’s driven by the correlation between diversity and profits. And it’s also driven by values that are from the Millennials and the Gen Z’s,” said Smithson.

In particular, attendees dedicated their Saturday to a nine-hour career and resource fair with the local support from Intuit, Qualcomm and Sony Playstation. The conference enabled the tech giants to showcase their “culture code” and internal programs, promoting how their company uniquely supports women in tech.

Event Coordinator of WomenOfAi, Nour Zabaneh said, “These groups are instrumental in introducing women to technology, providing them mentorship along their journey and giving them opportunities to advance their careers.”

Talk about great timing, the event, which has been described by participants as an extraordinary collaboration, took place just days before the coronavirus outbreak hit the region. Which in turn caused a domino-like effect of events and conferences being either postponed or cancelled.

“We felt pretty blessed.” Smithson said, “The feedback that we got, was that everyone was so glad we’re having conversations that are predicated on data. Although the numbers are really hard to look at, it gives us ability to have an honest conversation about the perception gap.”

Looking ahead, the successful San Diego Women’s Tech Summit plans to be held again next year with hopes to expand and attract an even larger crowd of emerging women leaders.

“This is just the beginning but it’s the actions that women take today that will pave the way for future girls to change the world with technology,” said Zabaneh, “As these organizations expand, cross collaborate, and reach more women there will be an increase in women in technology in the workforce.”