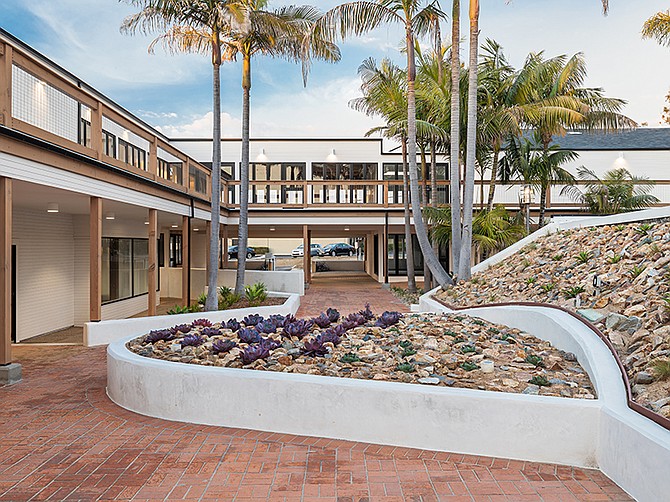 Photo courtesy of Harbor Associates. The newly renovated Bungalows office building in Del Mar has a beachy feel with storage rooms for bikes and surfboards.

A development company based in Long Beach is ramping up its investment in San Diego County with an eye toward redeveloping property to fit the tastes of people in their 20s and 30s –the so-called millennials.

“Millennial themes on how we use space and interact amongst coworkers is woven into our company fabric and designs since we’re all largely millennials,” said Justin Loiacono, one of the four principals of Harbor Associates.

Harbor Associates in a joint venture with Platform Ventures holding company based in Kansas bought Cornerstone Corporate Center at 1900-1903 Wright Place and 1917 Palomar Oaks Road in March for $34.2 and is putting the final touches on the $3.5 million redevelopment of a Del Mar office complex it bought in May 2018 for $15.7 million.

The company wants to invest an additional $250 million in Southern California with San Diego County among its prime targets, Loiacano said.

“We’re going to be very big players in the San Diego market,” Loiacano said. “Major employers are leveraging Carlsbad’s quality of life and coastal location to attract and retain workers. We intend to create an attractive workplace environment by adding relevant on-site amenities to create a best-in-class office campus for companies looking to be in Carlsbad.”

COVID-19 may slow down the redevelopment of the Carlsbad center, but Loiacano said renovation of the Del Mar property is pretty much finished.

“It’s to be determined if it’s going to slow down new acquisitions,” Loiacano said.

Harbor Associates was attracted to San Diego County for its quality of life and because property is less expensive than in other California markets.

The county also has a highly educated workforce, Loiacono said.

Coincidentally, the county also has one of the highest concentration of millennials in the nation, according to a recent study by Cushman & Wakefield – which Harbor Associates sees as its target market...

Among the company’s other principals, Paul Miszkowicz is 32 and Joon Choi is 37.

The fourth company principal – Rich McEvoy – is 43, “close enough to be a millennial,” Loiacono said.

Although Harbor Associates has investments elsewhere, “Our primary markets are really all of Southern California – Los Angeles, San Diego County, Orange County, a little bit of the Inland Empire,” Loiacono said. “We specialize in that middle market space, deals that are $20 million to $100 million.”

The company has kept a low profile, Loiacono said, but “as of lately, we’ve been acquiring projects that are competitive with some of the biggest players in the market.”

Typically, the company looks for buildings that were built from the 1970s to 1990s that are overdue for some work, Loiacono said. The Carlsbad property is slightly newer.

Existing amenities include a fitness center with men’s and women’s locker rooms, a sand volleyball court, a lap pool and spa, and outdoor dining areas with barbecues.

“We’ve got a pretty comprehensive repositioning plan,” Loiacono said. “Major employer are leveraging Carlsbad’s quality of life and coastal location to attract and retain workers. We intend to create an attractive workplace environment by adding relevant on-site amenities to create a best-in-class office campus for companies looking to be in Carlsbad.”

Brian Douglas, a senior vice president of Platform Ventures, said the acquisition of Cornerstone Corporate Center “fits our investment themes and allows us to work with an experienced local sponsorship group in a market exhibiting strong fundamentals.”

In keeping with its millennial theme, Harbor Associates plans to expand the amenity offerings at Cornerstone Corporate Center by relocating and expanding the fitness center to spill out into a courtyard plaza that will have shaded soft seating and Wi-Fi service.

The pool will be renovated and the sand volleyball court will be converted into a multi-purpose sports court and a fresh food service will be added.

“We’re trying to create office arrangements that promote health and wellness through providing on-site amenities and flexible work environments both indoors and outdoors,” Loiacono said. “We think these diverse environments help our tenants to creatively express themselves and work most efficiently.”

The company also is planning to renovate building lobbies and corridors.

“Across the four buildings, we will have touched quite a bit of the common assets,” Loiacono said.

The interior offices will range from 1,500 square feet to 6,000 square feet and include some that are wide open in what’s become known as creative office designs and others that are more traditional, McEvoy said.

“We like to offer a variety of spaces across both size and configuration,” McEvoy said. “We try to provide a supply of inventory, if you will, that’s appealing to the largest group of folks in the marketplace.”

The Del Mar project – the Bungalows at 2010 Jimmy Durante Drive - has a far more casual, beachy look and feel, in keeping with the community. McEvoy said.

“It resembles more of a beach cottage type feel,” McEvoy, said. “It’s a really unique product in the coastal market that’s quite different from a traditional coastal office location. It’s just a totally different experience from what you see in many of these Class A office towers.”

The two-story building has offices ranging from 1,500 square-feet to 4,500 square feet that are ready for tenants to move in.

Renovations included new siding and roofs, adding bike and surfboard storage rooms, electric vehicle charging stations, and on-site showers to allow tenants to bike to and from work, exercise during lunch breaks and take breaks at the nearby beach.

“We’re promoting a healthy work life balance that takes advantage of the amazing nearby outdoor amenities,” Loiacono said. “Health and wellness is important to millennials.”

Many of the office suites include skylights and windows that can be opened to allow for natural light and ocean breezes.

The company also added soft seating and Wi-Fi service in the renovated courtyard.

“The buildings hadn’t been touched since they were built in the early1980s, so there was a lot of work,” McEvoy said.