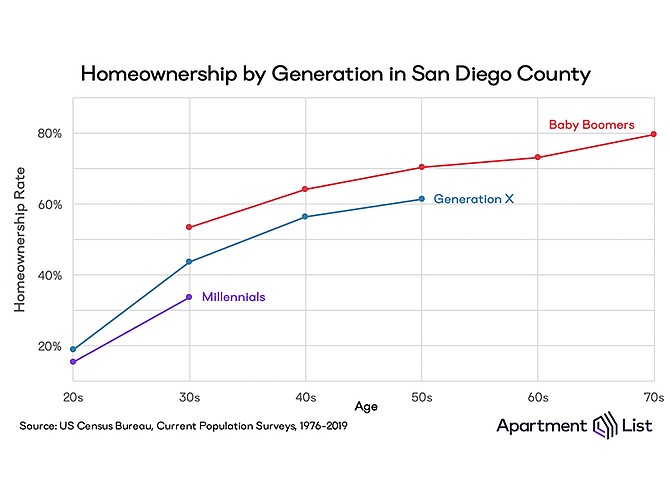 When it comes to buying homes, the so-called millennial generation — those in their late 20s and early 30s — fall far short of previous generations.

Rising home prices and mountains of student debt are holding millennials back from buying a home, said Rob Warnock, an economist with Apartment List.

“I think it ultimately comes down to a financial situation,” Warnock said.

More surprising is that the decline in home ownership is a trend that’s been going on for decades, Warnock said.

“What is usually described as a very millennial experience is actually this trend that’s been happening for four generations now,” Warnock said. “Every generation has had a lower home ownership rate than the generation that came before it.”

Why that happened is a bit of a mystery, Warnock said, considering that most surveys show the people of all generations see home ownership as an important factor in financial security.

“We’ve run some surveys that are asking whether people value home ownership, whether they think it’s important for personal success, for financial success,” Warnock said. “The vast majority of people, whether they’re old or young, most people would like to own a home.”

Wanting to buy and be able to buy is another matter.

According to a 2019 survey by Apartment List, nearly half of millennial renters have money saved for a down payment on a new home.

“The down payment is, for many, the largest and biggest financial obstacle to homeownership,” the firm reported.

Even though overall homeownership is down among millennials, they do make the largest segment of homebuyer, according to Apartment List.

“Millennials are the least likely to own a home, but the most likely to purchase a new one,” Apartment List said its national study on homeownership by generation.

“It’s not surprising that millennials today are buying a majority of new homes, given they’re now the largest generation and are in their prime home-buying years,” Warnock said.

When they do buy, the preferences of people in their 30s are very similar to that of older generations — primarily their grandparents, according to the National Association of Realtors.

Despite the age gap between millennials and the so-called silent generation, “the two groups are likeminded in terms of buying preferences,” the Association of Realtors reported in March.

About 53% of the youngest group of millennial home buyers — those between the ages of 22 to 29 — and silent generation buyers rated proximity to friends and family as a high priority, according to the association.

“The silent generation — older Americans who are typically grandparents and great-grandparents — for years have prioritized living near family and other loved ones,” said the association’s chief economist, Lawrence Yun.

“But it was surprising to see younger millennials with home buying preferences and ideals similar to older segments of the population,” Yun said.

Both groups also said they were attracted by the amenities that came with a new home.

“Although younger homebuyers closely mirror older buyers, the two groups are not totally in sync,” the association reported. “Younger millennials have the highest share of unmarried couples buying homes at 21% whereas only 3% of homebuyers in the silent generation and 3% of boomers were unmarried at the time of purchase. Older millennials have the highest share of married couples, 67%.