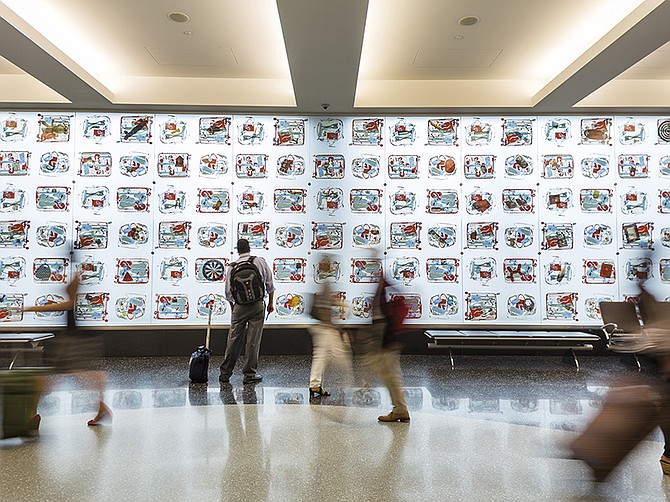 The San Diego County Regional Airport Authority, the independent agency that manages the day-to-day operations of the San Diego International Airport, wants travelers to know that the critical infrastructure in the transportation sector remains open and in full operation during the coronavirus pandemic.

“Obviously, there are a lot of changes as a result of coronavirus, primarily in the number of passengers going through the terminals and airlines suspending or temporarily reducing flights coming in and out of the San Diego International Airport,” said Kimberly J. Becker, president and CEO of the San Diego County Regional Airport Authority. “And the ones that are coming in have passenger loads and volumes that are less. That translates to fewer people parking, fewer people renting cars and fewer people getting food and beverages. So, our numbers are down. But we do have employees continuing to come to work… operating every day and following restrictions (and) getting people where they need to go and cargo where it needs to go.”

For the month of March, Becker said the airport is down about five flights. In April, it will be down an estimated 90 flights, she said. British Airways and Lufthansa have temporarily suspended flights to San Diego due to the European suspension of entry. Countries included in that list are: Austria, Belgium, Czech Republic, Denmark, Estonia, Finland, France, Germany, Greece, Hungary, Iceland, Italy, Latvia, Liechtenstein, Lithuania, Luxembourg, Malta, Netherlands, Norway, Poland, Portugal, Slovakia, Slovenia, Spain, Sweden and Switzerland, said Becker. And as of March 16, the United Kingdom and Ireland are also restricted.

While there is no data yet on how much passenger count has been impacted as a result of COVID-19, Becker said airlines are trying to manage their fleets to effectively control expenses while still providing services.

After closely analyzing its finances, Becker said the agency is delaying about $130 million worth of projects in its “Capital Improvement Program” spending budget, adding that there might be more delays to come. She said construction projects already in the works will continue and the ones that were planned for later will move forward with the procurement and federal environmental review processes. Becker said the agency is looking at projects that have not been started yet to reassess its needs and also to make sure it is controlling costs as much as possible.

“We are looking at all financials and trying to figure all of that out,” Becker said. “Everything is moving at a record pace. Every time we think we have a plan together, something new happens and requires for us to hit the planning board again.”

When looking at immediate adjustments, Becker said the airport has already closed most of its food and beverage shops as well as specialty stores. She said most retail, food and beverage places opted to close on their own because of decreased traffic levels. She added that those that are open have reduced their capacities so social distancing recommendations and requirements are met.

“What we did is we closed down all specialty retail, like the shops that sell goods and gifts and things like that that aren’t essential for travel,” she said. “We kept open news and gift shops because they sell water, snacks and over the counter medicine. We kept some of them open in the terminals or in each area passengers might go through so there is at least one place they could access necessities.”

Overall, the airport as well as airlines, the latter which handle the cleaning of their respective aircrafts, have all stepped up their maintenance efforts, Becker said, adding that after each flight, cleaning crews are more thoroughly washing each airplane. And, if the plane remains at the airport overnight, the cleaning department is conducting even more deep cleaning efforts to ensure the interior of the planes are sanitized, completely disinfected and safe, she said. Becker added that in the terminals, all high touch level areas are being scoured more frequently to protect the health and wellness of those traveling through the airport.

Carl Winston, director of San Diego State University’s L. Robert Payne School of Hospitality and Tourism Management, said there are still a lot of flight options out of San Diego – all things considered – to all cities within the United States as well as Canada, as domestic travel has not been suspended.

“There are plenty of planes flying,” Winston said, “and as long as there are planes flying, there are people in them, although they might not be heavily packed. But, when you fly, you might need a hotel,” and food, and maybe a car and gas, he said. He added that air freight is also still flying, mostly to prevent grocery stores from having supply shortages. And, while that is not classic tourism business, it still provides some level of impact, he said.

Additionally, Jonathan Heller, director of communications at San Diego International Airport, said there are still a lot of college students traveling as universities around the country have asked them to leave their campuses amid growing concerns about the potential spread of the virus.

“Health and public safety personnel as well as cargo are also traveling across the country, most times via air travel,” he said.

For Becker, her top priority at the airport continues to be the safety of travelers as well as the safety of her team. She said, while still effectively serving the traveling community, the San Diego County Airport Authority staff has divided itself into two groups to ensure there are always two different teams available to take the lead when its counterpart is out. Even if two people are on duty together, Becker said they are working in separate areas to make sure there is enough distance between them.